Minnesota Sen. Amy Klobuchar revealed Thursday that seven months ago she was diagnosed with breast cancer and is now cancer-free after a lumpectomy and one course of radiation.

“It’s something that no one wants to hear, and no one wants to experience, but it’s really renewed my faith in the people around me and in my purpose,” Klobuchar, a Democrat, told "Good Morning America" co-anchor Robin Roberts, herself a breast cancer survivor, in an exclusive interview. “I feel much better now."

In a Medium post informing the public for the first time Thursday morning, Klobuchar, 61, described receiving her Stage 1A breast cancer diagnosis.

“In February of this year, doctors at Mayo Clinic found small white spots called calcifications during a routine mammogram. After this was discovered, I had a biopsy at Piper Breast Center in Minneapolis, and then learned that I had Stage 1A breast cancer,” Klobuchar wrote. “Of course, this has been scary at times, since cancer is the word all of us fear, but at this point my doctors believe that my chances of developing cancer again are no greater than the average person." 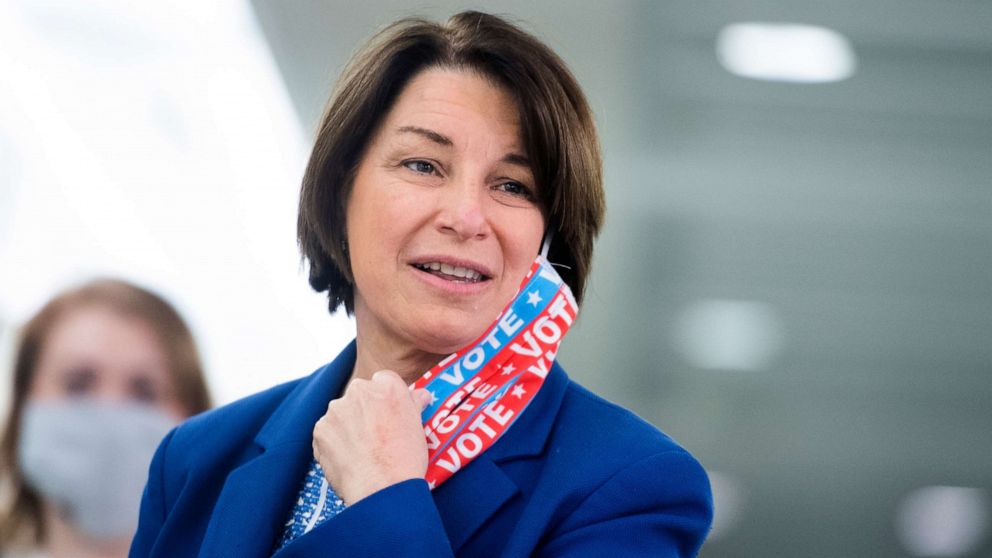 According to the nonprofit Breastcancer.org, early stage means the tumor measures “up to 2 centimeters and the cancer has not spread outside the breast; no lymph nodes are involved.”

Klobuchar, who was treated at the Mayo Clinic, recounted the poignant memories of her harrowing experience -- her husband taking her to her radiation treatment, her daughter's phone calls, nurses giving her a red, white and blue mask, and "the perfect stranger" who would help her at the airport with her suitcase, unaware of her condition as she shuttled between Washington and Minneapolis.

“There's just a lot of people who helped me get through this. I learned every day is a gift,” Klobuchar told Roberts.

I wanted to share an update about my health. https://t.co/0yGWuw4OKV

Klobuchar said her primary message for Americans is not to ignore routine medical exams especially during the coronavirus pandemic.

“Right now, thousands of women have undetected breast cancer. One in three Americans have put off going to any kind of routine examination or procedure [during the pandemic]," said Klobuchar. "So, the doctors over and over are telling me that they’re seeing people with much bigger problems than if they'd gone in early. So, that's my first practical advice. Get those screenings. Go in, get a mammogram. Get whatever health checkup that you should normally be getting ... and the second is, just be grateful for the people around you."

Amid the COVID-19 pandemic, the number of people being diagnosed with breast cancer has declined by half, suggesting fewer people are visiting their health care providers, according to research released last year.

Women age 45 to 54 should get mammograms every year, according to the American Cancer Society.

Despite the serious illness and treatment, Klobuchar kept up a grueling schedule in the Senate. As chair of the Senate Rules Committee, Klobuchar was responsible for intensive hearings analyzing the Jan. 6 riot at the Capitol and its cascading security failures. She then shepherded her caucus’ effort to pass sweeping election security legislation that was eventually blocked by Republicans.

Through all of it, she quietly took inspiration from those around her, never revealing her own challenge.

“Some of my colleagues who had cancer before gave me inspiration, even though they didn’t know I had [cancer] at that time,” the senator told Roberts.

Klobuchar's diagnosis came not long after her husband suffered a serious medical emergency. A little more than a year ago, as Congress was toiling on a major COVID-19 economic rescue package, Klobuchar's husband contracted COVID-19 and was seriously ill for a time.

Klobuchar had to live apart from her husband and continue work at the Capitol through the long hours of debate and final passage.

Klobuchar was first elected to the Senate in 2006 on a blue wave that saw Democrats take control of Congress. Before that, she was a prosecutor in her home state’s largest county.

In 2020, she mounted an ill-fated run for the presidency, later becoming a key surrogate for then-Vice President Joe Biden.

When asked by Roberts what she would say to people who are going through their own personal challenges right now, Klobuchar replied, "Reach out to those that you love, and people will surprise you."