A long-time surfer hailed his fast-acting friend and the California Coast Guard for his rescue from a brutal shark attack and giving him a true "Christmas miracle."

Adam Coons told ABC News he thought he was ready to catch his last wave of the day while surfing off Santa Rosa Island on Saturday afternoon when he was attacked by a reported 15-foot shark.

"I just said, 'I'm going to surf for 45 minutes, then we'll get outta here,'" Coons recalled of his plan for the day. 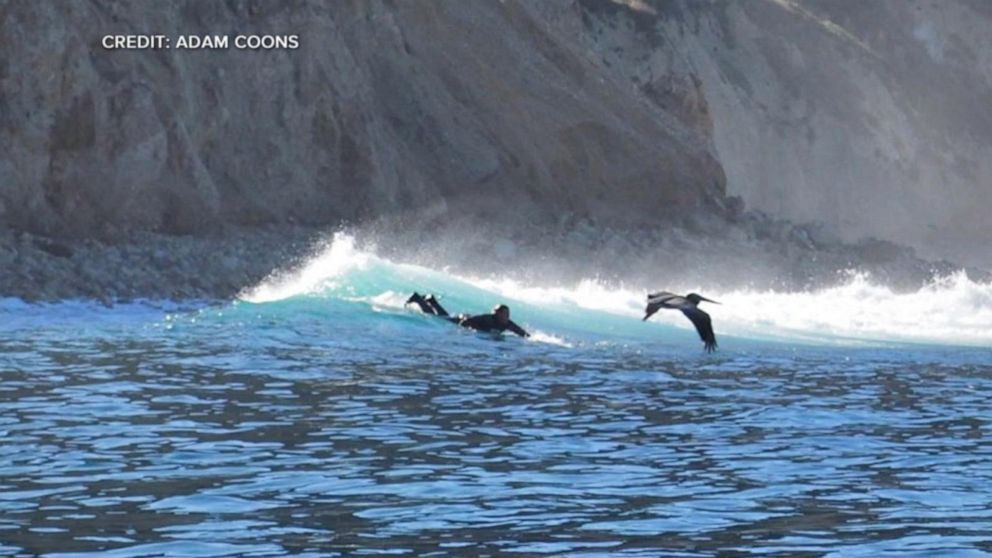 "It felt like I just got blasted by a torpedo," he recalled. "I didn't feel the bite from the adrenaline and then I was immediately [submerged] underwater getting thrashed," Coons said.

As he battled for his life with what he and witnesses said they thought was a great white shark, his friend Jeremy Howard looked on in horror and said he knew he had to move fast.

"I looked up and the white shark was hitting at him, it took him out of the water probably I'd say about five feet, ya know the shark had him in [its] mouth," Howard told ABC News.

Howard was "just kinda cheering" for Coons to make it back to the boat, "I just said 'come on buddy, you can make it.'"

The former lifeguard used his extensive water rescue training to pull Coons to safety and quickly applied a tourniquet letting his friend know what was happening.

"I just said -- 'we're going to lay you down right now and I'm going to tie you off on your upper right leg to stop the bleeding,'" Howard said.

A Coast Guard helicopter crew airlifted Coons for further aid from paramedics at the Santa Barbara Airport, where he was transported by EMTs to a local hospital.

Authorities posted a video of the rescue on Twitter, which shows the man wearing a wetsuit while being hoisted from a boat to the helicopter.

"Without them I wouldn't be here," Coons said. "I just want to thank those guys from the bottom of my heart."

(MORE: Teen 'tackled' by great white shark in Southern California at first thought it was friend 'trying to mess with me')

Although Coons' surfboard was demolished his wetsuit still showed the puncture marks from where the shark bit down on his leg and left four lacerations. 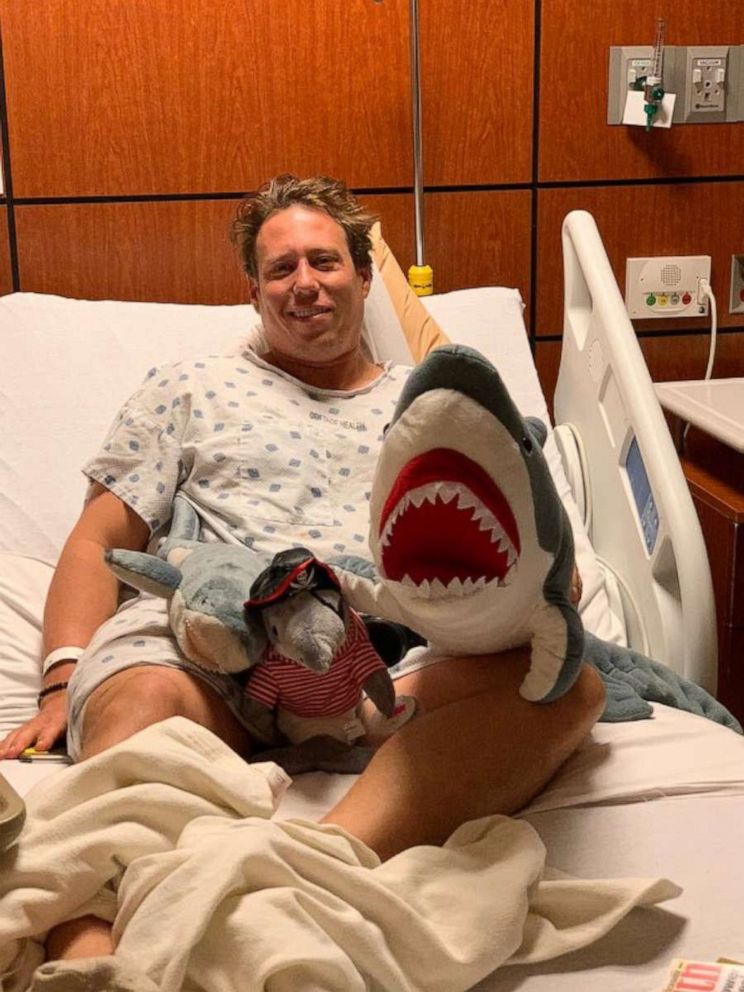 Adam Coons
Adam Coons recovers in the hospital in Santa Barbara after he was attacked by a shark while surfing on Dec. 21, 2019.

"This was truly a terrifying and horrific situation, and I am so happy and grateful to be alive," Coons continued. "I am very thankful to The Coast Guard, [Santa Barbara] Cottage Hospital; wanting to see my wife, Jackie and our son Tosh again really kept me going and my friend Jeremy Howard, who had a lifetime of experience as a commercial fisherman and former lifeguard to be able to do everything he did to help save my life. If any of these puzzle pieces didn’t come together, I don’t believe I would be here right now."

Coons also said he hopes this story of a "Christmas miracle" will inspire others going through similar or worse hardships.

"I don’t know why it’s me and my family that get to stay together, while others have lost so much, and why I am keeping my legs and why I will have full recovery, except to hopefully inspire others to not give up on their passions and for families to hear the story of a Christmas miracle and to come together during the holidays no matter what might have been otherwise standing between them," he said.

Coons, who considers himself a spiritual person, said, "I know that this is the plan for me and I don’t intend to squander this new lease on life."

"I am incredibly lucky to be alive and I’m thankful to all the first responders and my guardian angel, my mom, who was there as a lone seagull following the boat keeping a watchful eye until the chopper arrived," he added. "God Bless."

Coons' friends gifted him a shark stuffed animal to comfort him in the wake of the harrowing experience.

Now recovering at home, Coons said he doesn't know when he'll be back in the water, but hopes that this helps others consider the risk factors when going surfing and he advised people to not go out alone if they do not have communication with anyone on land.