There was blood in the hallway and children were covered in it, one of the students who survived the mass shooting at Robb Elementary School in Uvalde, Texas, told ABC News.

"[The shooter] came in and said, 'You're all gonna die,' and just started shooting," Samuel Salinas, 10, recalled in an interview airing Friday on "Good Morning America."

Salinas was a student in Irma Garcia's fourth-grade class. They were scheduled to graduate Thursday, but the ceremony was canceled because Garcia, another teacher and 19 third- and fourth-grade students were killed in Tuesday's massacre. Another 17 people were wounded, including three law enforcement officers.

The gunman, Salvador Ramos, allegedly purchased two assault rifles just days after turning 18 and used them to carry out the second-worst school shooting in U.S. history, killing 21 people, according to authorities.

Some of the children and teachers who walked into school that day had no idea it would be their last. 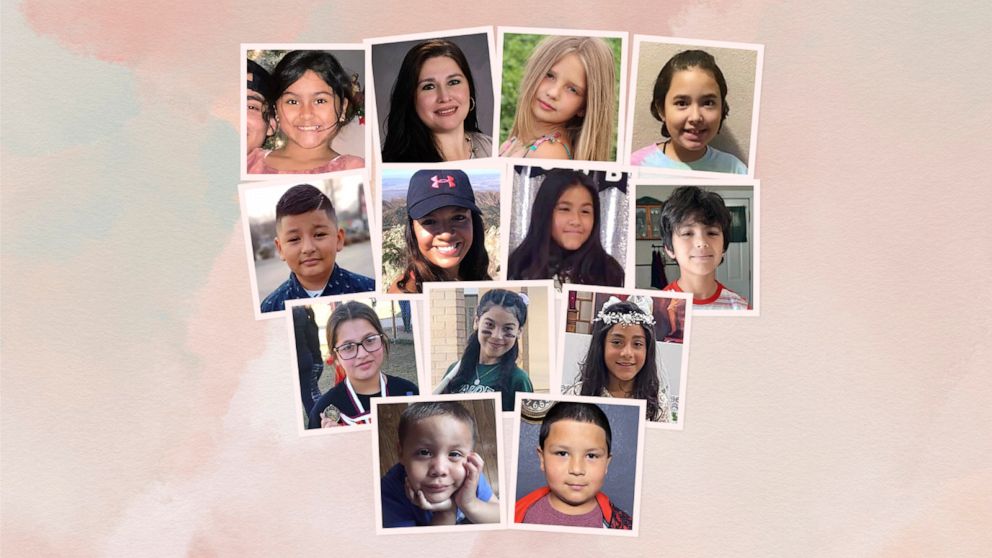 Courtesy the Families
Some of the people who died on May 24, 2022 at Robb Elementary School in Uvalde, Texas, in a mass shooting.

Salinas, whose mother died in a car accident in 2019, said his aunt dropped him off for school on Tuesday morning.

"It was a normal day until my teacher said we're on severe lockdown," he told ABC News, "and then there was shooting in the windows."

Salinas said the gunman came into his classroom, closed the door and told them, "You're all going to die," before opening fire.

"He shot the teacher and then he shot the kids," Salinas said, recalling the cries and yells of students around him. 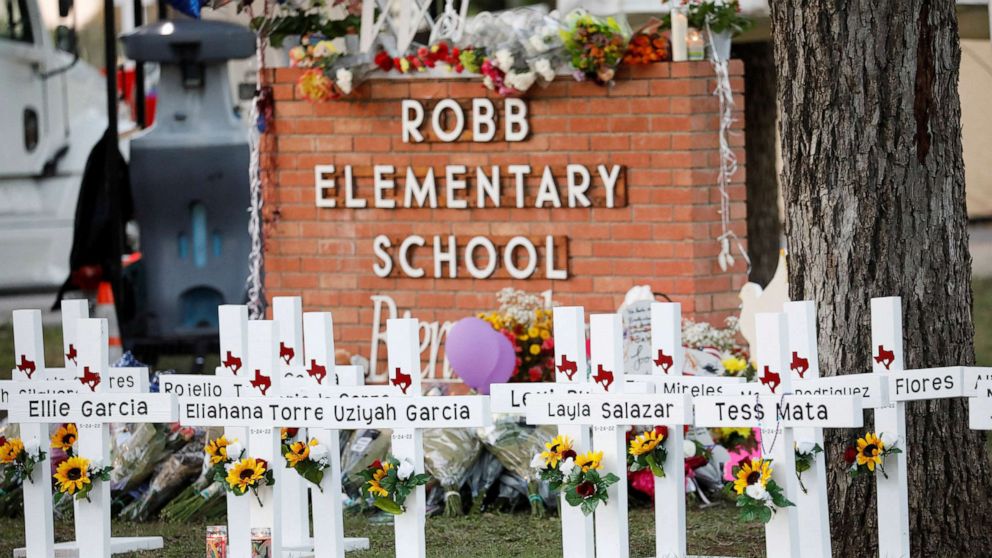 Marco Bello/Reuters
Crosses with the names of victims of a school shooting, are pictured at a memorial outside Robb Elementary school, after a gunman killed nineteen children and two teachers, in Uvalde, U.S. May 26, 2022.

"I think he was aiming at me," Salinas said, but a chair was between him and the shooter, and the bullet hit the chair. Shrapnel struck Salinas' thigh and got lodged in his leg. Then he pretended to be dead, he said.

"I played dead so he wouldn't shoot me," he added, noting that a lot of other children did the same.

MORE: Mother of Texas gunman says son was 'not a monster,' could be 'aggressive'

A cellphone in one of the student's desks started ringing, and as the girl was trying to silence it, Salinas heard gunshots. Police engaged the gunman and then moved desks out of the way to free the children, he said.

As police rushed him out of the room, Salinas said he saw the bodies of his teacher and other students. 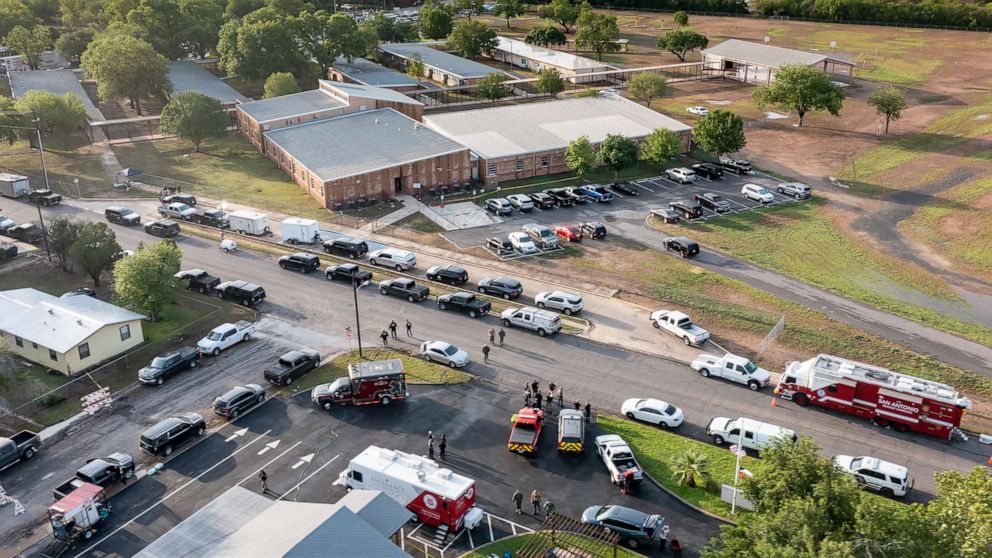 Jordan Vonderhaar/Getty Images
An aerial view of Robb Elementary School, May 25, 2022, as law enforcement works at the scene of a May 24 mass shooting that left 21 people dead, including 19 children, in Uvalde, Texas.

Now, Salinas said, he has nightmares of the shooter and of being shot.

When asked how it felt to join the growing list of school shooting victims, Salinas said the idea of going to fifth grade is simply overwhelming.

"Whenever there's a lockdown, then I'll be really scared," he told ABC News, fighting back tears. 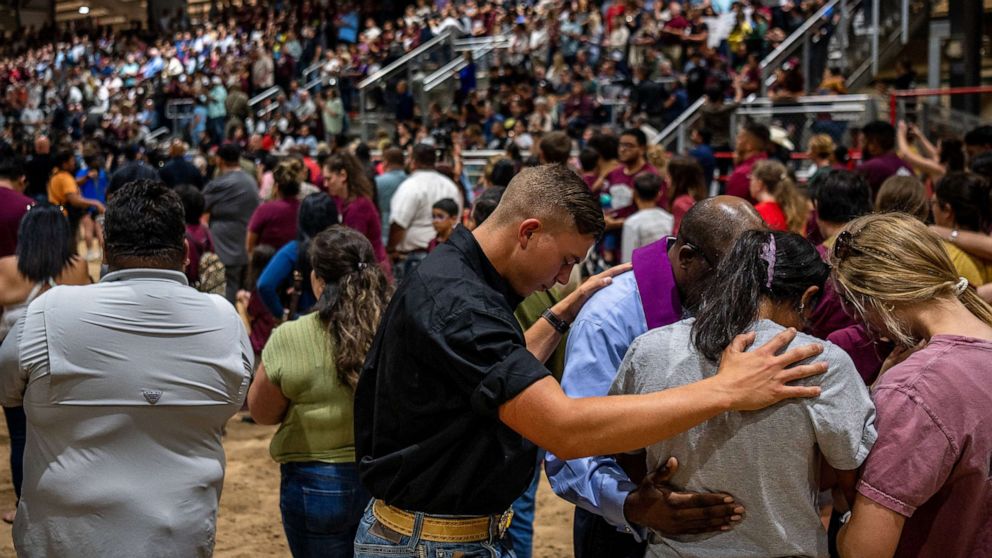 Brandon Bell/Getty Images
Community members pray together at a vigil, May 25, 2022, for the victims in the mass shooting at Rob Elementary School, in Uvalde, Texas.

Even the idea of reuniting with his friends who survived the shooting was too much for the 10-year-old to think about.

"I'm not looking forward to it," he said. "I'm just going to stay home and rest."

His father, Chris Salinas, sat quietly beside him as he recounted the experience. It was the first time he had heard the details of his son’s encounter and it nearly brought him to tears.

The one message the fourth-grader said he has for his fellow surviving classmates at Robb Elementary School: "I'm glad you're alive."

ABC News' Izzy Alvarez in Uvalde contributed to this report.