A fourth grader who said she played dead during the mass shooting at a Texas elementary school and the parents of one of the children killed in the massacre will testify before Congress next week on gun violence.

Miah Cerrillo, a student at Robb Elementary School in Uvalde, will be among the speakers at a Committee on Oversight and Reform hearing named "The Urgent Need to Address the Gun Violence Epidemic," the committee announced Friday.

The hearing, scheduled for June 8 at 10 a.m., will feature the families of victims of the Uvalde shooting and last month's allegedly race-motivated shooting at a supermarket in Buffalo, New York, as well as local medical and law enforcement officials from both shootings and gun control advocates.

MORE: Biden calls for ban on assault weapons: 'This time we must actually do something'

After the shooter opened fire in her classroom and continued to shoot in an adjoining room, Cerrillo told CNN that she and a friend grabbed their dead teacher's phone and called 911 for help. Fearing the gunman would come back, she covered herself in a dead classmate's blood and played dead, she said in a harrowing account days after the May 24 attack.

Her mother said her daughter is traumatized by what she experienced. The child also suffered a wound on her back from a bullet fragment, her mother said. 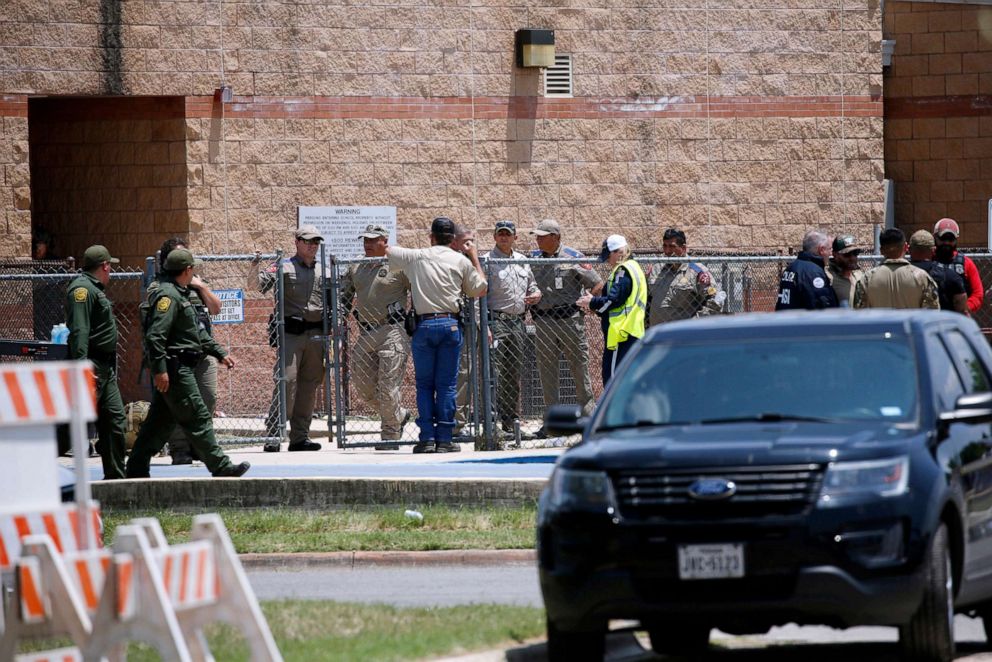 Dario Lopez-Mills/AP
Law enforcement, and other first responders, gather outside Robb Elementary School following a shooting, on May 24, 2022, in Uvalde, Texas.

Ten-year-old Alexandria "Lexi" Aniyah Rubio was one of the 19 children killed in the shooting. Her parents, Felix Rubio and Kimberly Rubio, will also testify during the hearing, the committee said.

Just hours before she was killed, a smiling Alexandria posed with her parents after receiving a certificate for being a straight-A student, her family said. She also received a good citizen award.

"We told her we loved her and would pick her up after school. We had no idea this was goodbye," her mother wrote on Facebook the day her daughter died. 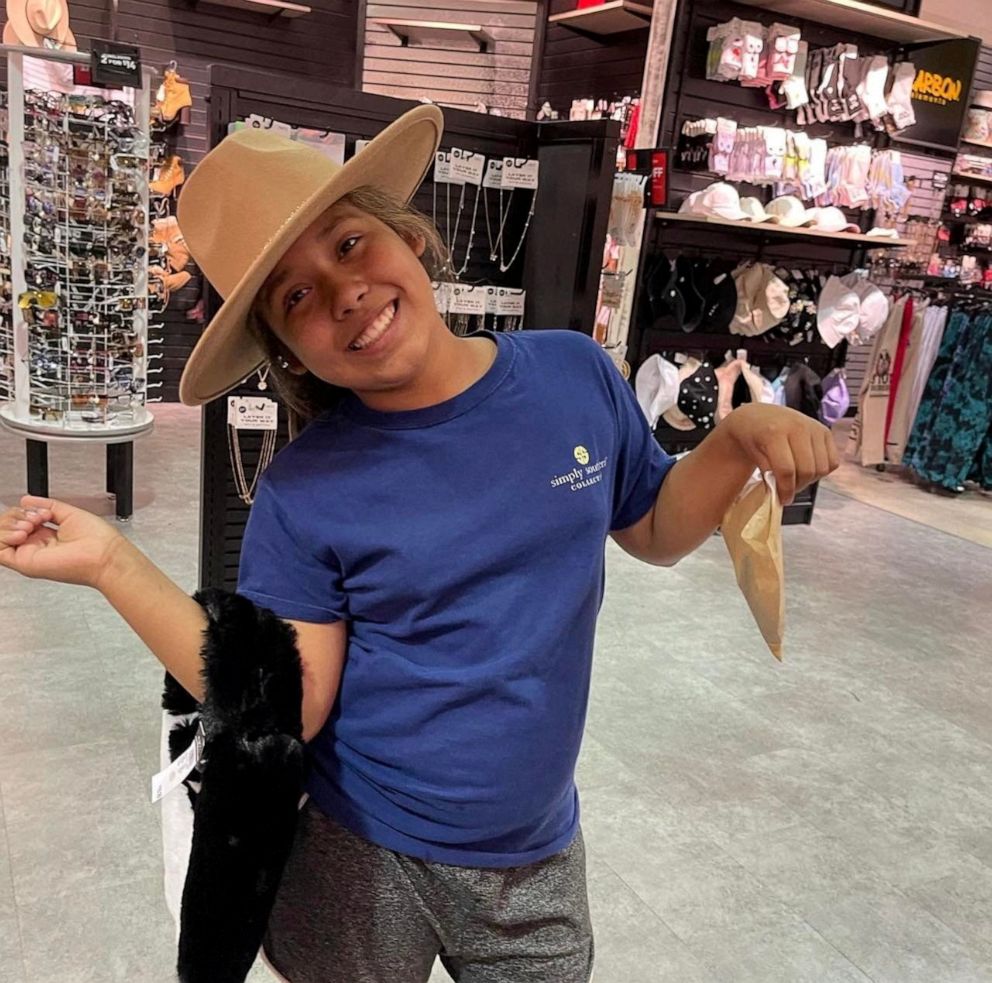 Alexandria aspired to earn a college softball scholarship and major in math, before attending law school, her family said in her obituary.

A visitation service for Alexandria will be held two days after the hearing, with her funeral on June 11.

Dr. Roy Guerrero, a pediatrician who treated several victims in the shooting, will also be among those testifying.

"I lost it for a little while," he told Today in an interview days after the attack. "And that's OK, but I told myself to get it together. I have to take care of the rest of these kids. I can't lose myself." 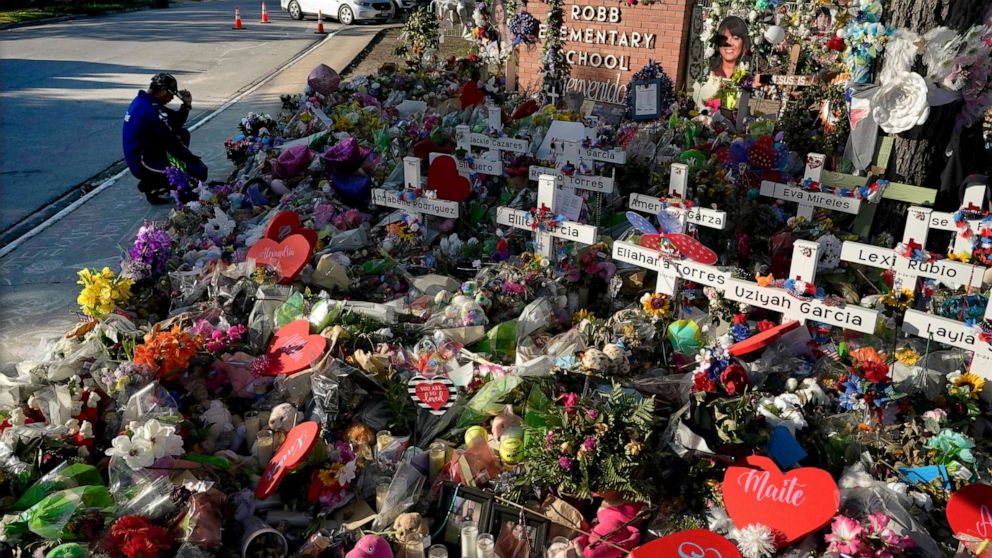 Eric Gay/AP
A man pays his respects at a memorial outside Robb Elementary School to honor the victims killed in last week's school shooting, onJune 2, 2022, in Uvalde, Texas.

The hearing also falls a week after a deadly shooting at a medical office in Tulsa, Oklahoma, which marked the 233rd mass shooting in the U.S. so far this year, according to the Gun Violence Archive.

"After 19 innocent children and two teachers lost their lives in Texas just ten days after the mass shooting in my home state of New York, I’m turning my anger into action," Rep. Carolyn Maloney, the chairwoman of the Committee on Oversight and Reform, said in a statement. "Our hearing will examine the terrible impact of gun violence and the urgent need to rein in the weapons of war used to perpetrate these crimes."

MORE: Here's what states are doing to address gun control

In the wake of the mass shootings, President Joe Biden called for a ban on assault weapons and high-capacity magazines, among other gun reform measures, during an impassioned address Thursday night.

"We spent hours with hundreds of family members who were broken, whose lives will never be the same," Biden said. "They had one message for all of us. Do something. Just do something...After Columbine, after Sandy Hook, after Charleston, after Orlando, after Las Vegas, after Parkland, nothing has been done. This time that can't be true. This time we must do something."

The House Judiciary Committee on Thursday voted along party lines, 25-19, to approve the Protect our Kids Act and send it to the full chamber for a vote next week.

The bill, which would raise the purchasing age for semiautomatic rifles to 21, limit large-capacity magazines, create safe storage requirements and tighten regulation of "ghost guns," lacks the 60 votes needed to pass in the Senate.