President Trump ripped into Democratic gubernatorial candidate Stacey Abrams at a rally in Macon, Georgia, on Sunday, calling her "radical," and "one of the most extreme far-left politicians in the country."

The president was headlining a rally for Republican gubernatorial candidate Brian Kemp, who he also endorsed during the primary, likely catapulting Kemp from second place to Republican nominee in the general election.

A crowd of thousands in a Middle Georgia Regional Airport hangar cheered raucously for "six more years" of a Trump presidency. They also chanted "lock her up" during Trump's references to a woman who admitted to falsifying rape claims against Supreme Court Justice Brett Kavanaugh. Those claims were not considered serious by Senate investigators, and stand in contrast to the allegations made by Dr. Christine Blasey Ford, who testified before the Senate Judiciary Committee.

(MORE: It's Democrats +8 in likely voter preference, with Trump and health care on center stage)

During the rally, Trump baselessly told the crowd that if Abrams is elected, "your 2nd Amendment is gone." 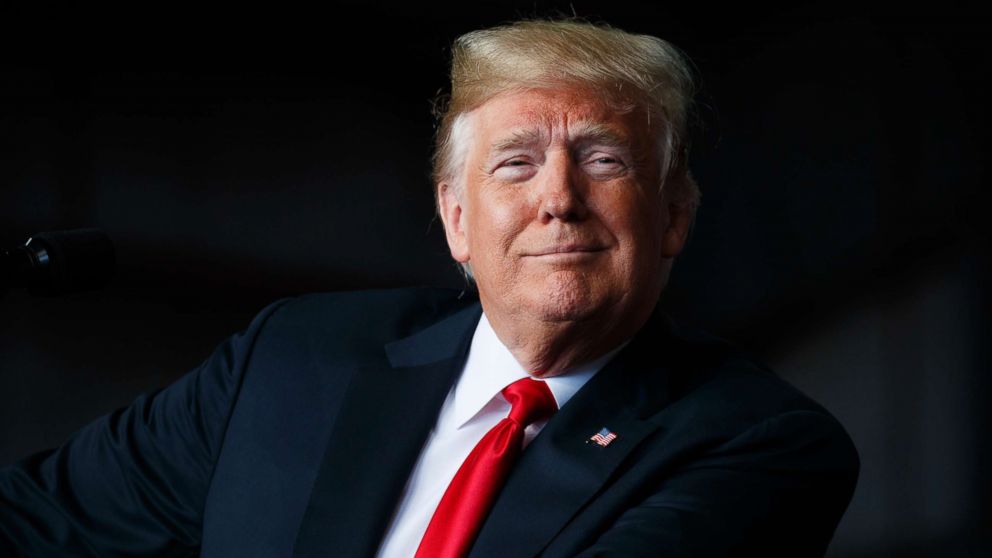 Abrams has campaigned on increasing gun control in Georgia while "having respect for the 2nd Amendment."

Trump also said Abrams "wants illegal aliens to vote," a common criticism of Abrams referencing a video that surfaced of her saying undocumented immigrants are part of the so-call "blue wave" of Democratic voters expected to vote in this year's elections.

Abrams refuted that accusation in an interview with ABC News' Deborah Roberts. "I know that the only people who are allowed to vote are eligible citizens," said Abrams.

The president further riled up the crowd with references to the "caravan" of migrants moving from Central America towards the U.S.-Mexico border.

"You saw last week I called up the U.S. military, we’re not playing games," he said of the thousands of U.S. troops headed to the border just days before the midterm election. "Because you look at what’s marching up, that’s an invasion," he said. Trump also accused the caravan of including criminals.

(MORE: Central American migrants in caravan respond to President Trump calling them criminals: 'This is all propaganda')

Trump is scheduled to hold another rally on Sunday night in Chattanooga, Tennessee.