As state leaders and officials across the country continue to urge people to wear masks, a video taken over the weekend, of a woman going on a tirade after refusing to wear a mask in a grocery store, has gone viral.

The incident, filmed by bystanders on June 26 at a Trader Joe's in North Hollywood, California, shows a woman yelling at employees and throwing her shopping basket after being asked to put a mask on while inside the store.

"I have a breathing problem! My doctor would not let me wear masks!" the woman in the video said. "Anyone harassing me to wear a mask, you guys are violating federal laws! Get that on camera!"

0:14
A woman's heated confrontation with Trader Joe's employees in North Hollywood goes viral after she refuses to wear a mask inside

The woman told ABC station KABC-TV that she had gotten permission from the manager at the Toluca Lakes store to go maskless but accidentally went to the wrong location in North Hollywood, where she said she also got permission. She claims the incident began while she was shopping.

"Right away he started using obscenities at me and I did what any normal human being, a woman, would do if she was being harassed by a man, not knowing if he’s a crazy man," said the woman, who asked the station to not use her name. "So I started yelling in self-defense."

The woman declined to give any details about her medical condition. Trader Joe's has yet to comment on the incident. 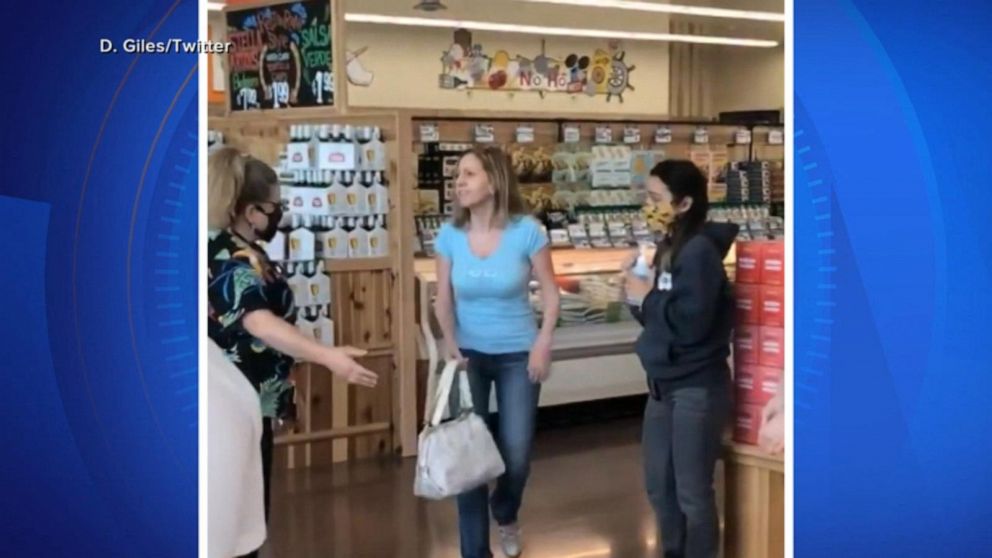 Earlier this month, California Gov. Gavin Newsom made wearing masks in public mandatory amid the COVID-19 pandemic, but the state's Department of Health has exempted anyone "with a medical condition, mental health condition, or disability that prevents wearing a face covering."

In Los Angeles County, where the incident took place, the county's Department of Health updated their guidance for cloth face coverings on June 26 and noted, "Individuals who are exempt from wearing a face covering due to a medical condition and who are employed in a job involving regular contact with others must wear an alternative such as a face shield with a drape on the bottom edge."

MORE: Don't fall for these 3 myths about face masks

City and county guidelines aside, Trader Joe's also announced at the onset of the pandemic that they "encourage customers to wear a mask or face covering while shopping in all our stores."

In the U.S., 18 states require masks in public, while 32 have no such mandate.

Despite the woman's claim of a breathing problem being the reason behind her not wearing a mask in the first place, millions who viewed the video online have shamed her for what they perceived as selfish public behavior.

"Not having a mask on today is just silly," Trader Joe's customer Nate Geez told KABC. "Considering all the outbreaks that are happening in other states and re-surging cases in our own state, we don't need to go backwards."

MORE: Bringing America Back: The role of masks in the fight against COVID-19, rising new cases and more

"I have asthma," said Jessica Govea, a Trader Joe's customer. "And I'm wearing my mask. There are times that I feel that I can't breathe, but if I'm out there shopping, I have to wear it for the sake of others and for the sake of my health."

The only people who should not be wearing masks in public are toddlers under the age of 2, people with extreme respiratory distress and people who are unconscious, according to Dr. Jennifer Ashton, ABC News' chief medical correspondent and a board-certified OBGYN.

"In general, if your breathing condition is well enough to allow yelling or being outside without oxygen, you can wear a mask medically," Ashton said Monday on "Good Morning America."

Ashton also explained the latest on new research that suggests wearing a mask may also protect the mask wearer, as well as others. The research was published in the medical journal The Lancet and was recently discussed by Dr. Deborah Birx, the White House coronavirus response coordinator.

"Back in January, February and early March, the reason that the CDC and medical officials, myself included, [were not recommending that the lay public wear masks is because outside of a hospital setting there was really no data to suggest it could protect the person wearing it and we put masks on sick people in hospital settings," she said. "When the CDC revised that is because we realized that so many people infected with COVID-19 show no symptoms so the assumption is that we all may be sick."

"What Dr. Birx is referring to is new data published in The Lancet that suggests that wearing a mask outside of a hospital setting may actually protect the wearer as well, so two reasons to mask up," said Ashton.