In the less than 48 hours since Sen. Kamala Harris, D-Calif., was announced by former Vice President Joe Biden as his vice presidential pick for the Democratic ticket, the history-making nominee has been called "nasty," "angry" and a "mad woman" by President Donald Trump.

In the days and weeks leading up to her nomination, Harris was reportedly deemed "too ambitious" by some of Biden's own donors and was included in an opinion column comparing the vice presidential selection to the TV show "The Bachelor." 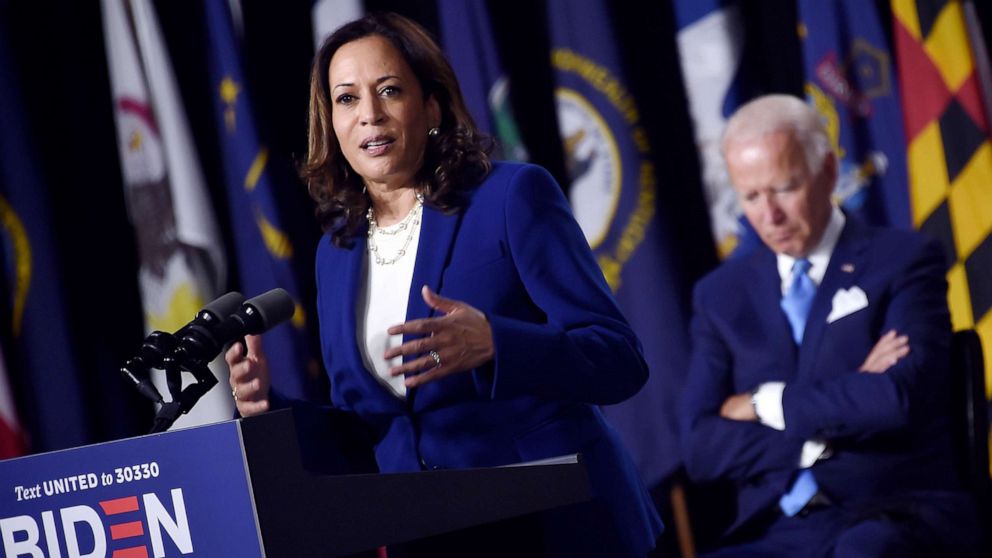 Instances of sexism like the ones faced by Harris, only the third female vice presidential nominee in history and the first Black woman and Asian American woman on the ticket of a major political party, are already being called out by women's groups across the country.

Time's Up, an advocacy and legal-defense group founded along with the #MeToo movement, announced a "We Have Her Back Campaign" to counter sexist coverage of Harris in the run-up to the election. The organization has also launched a non-partisan, rapid-response effort to defend Harris and other women candidates from sexist attacks.

"When our politics focus on a woman's likability or ambition instead of her experience and expertise, we all lose out," Tina Tchen, Time's Up's president and CEO, said in a statement. "We will not allow these attacks, which have stamped out the political ambitions of countless qualified women and kept others from pursuing office in the first place, to go unanswered."

Before Harris's nomination was even announced, hundreds of Black female leaders signed their names to a letter denouncing what they called racist and sexist attacks against Biden's vice presidential candidates, which included several Black women in addition to Harris.

"While some of the relentless attacks on Black women and our leadership abilities have been more suggestive than others, make no mistake -- we are qualified and ambitious without remorse," the letter read.

We will no longer sit silent. We are united. We are committed to protecting black women. PERIOD. Sign your name to the petition supporting this letter. #WinWithBlackWomenhttps://t.co/XeiCAXpXs1

Last week, leaders from women's organizations including Times Up, EMILY's List and Planned Parenthood sent a letter to media outlets, urging them to not make the then-unnamed female nominee the subject of "stereotypes and tropes about qualifications, leadership, looks, relationships and experience" that they said have led the "lack of diversity at the top of society's roles."

"The point of all of this is just to say we're watching and we've got her back," Christina Reynolds, vice president of communications at Emily's List, told "Good Morning America." "It's to say that whether [sexist coverage and attacks] are intentional or not, we all need to be better educated about how to look at these races and cover these races on the substance, on the merit."

Reynolds said groups like Emily's List and others have been able to act so quickly this election cycle in large part because they have seen this scenario play out before, most recently with Hillary Clinton's failed 2016 presidential bid and the six women who ran for the 2020 Democratic presidential nomination. 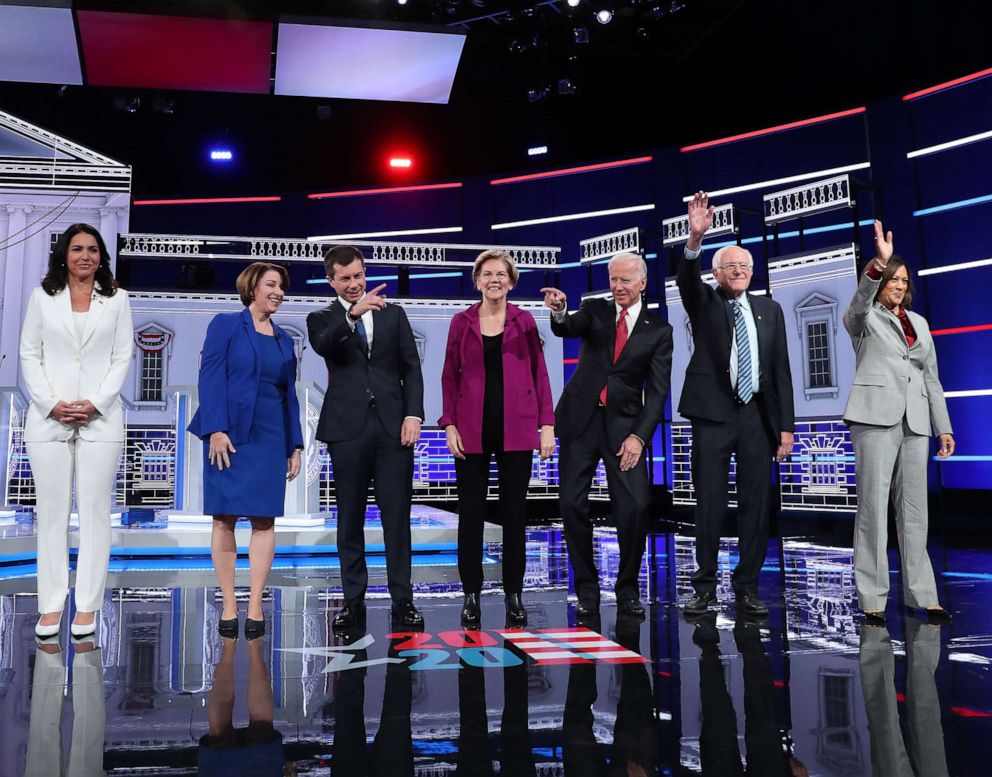 "A lot of people chalked it up to, 'Oh, that's just about Hillary,'" said Reynolds, who worked on Clinton's 2016 campaign. "What I think a lot of us saw with this presidential race with six women running and multiple women on the debate stage was that it wasn't just Hillary."

"The way we differentiate women, the way we diminish their experience, the way we make them different and point out the way that they're not like what we've had in these positions before disadvantages the women," she said. "Every woman who runs for office sees some version of these things."

Sarah Palin, the nation's second female nominee for vice president when she ran on the Republican ticket with the late John McCain in 2008, said she thinks the support from women's groups gives Harris a "bit of a privilege."

"I think she's in a better position in terms of what to expect than I or Geraldine Ferraro because, again, people have come before her to be able to run," Palin said Thursday on "Good Morning America." "We see the big feminist lists of women who have already come out to support her, kind of saying, 'Hey, media, keep your hands off her when it comes to some issues that maybe you're gearing up to attack her for.'"

The spotlight on the sexism that female candidates face comes as more women are running for office than ever before.

Women of both parties set records for U.S. Senate and U.S. House candidacies this year, according to the Center for American Women in Politics (CAWP) at Rutgers University.

"I think that women who run for office understand that there will be people who disagree with them on policy issues," said Debbie Walsh, director of the CAWP. "Those are the kinds of things that you expect and you debate and is the whole point of a campaign, to talk about the issues." 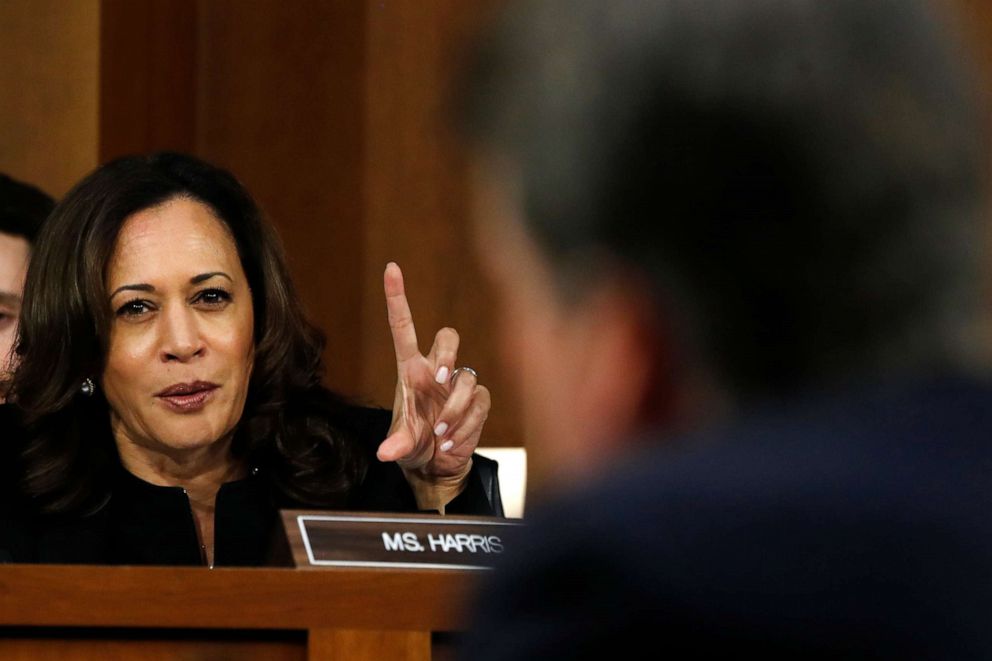 "What is a challenge for women is that there are overt and subtle attacks on them that are gender-based," she said. "Some of them are straight up the kinds of things where they're called out about their clothing or appearance. They're told they should smile more. They're accused of yelling. There are comments about their voice being grating."

"It diminishes you," Walsh added.

Sen. Tim Kaine, Hillary Clinton's vice presidential nominee in 2016, said he saw firsthand the effect that sexism had on her presidential bid.

"The ambition theme [around Harris] that's popped up in recent weeks is just a sad part of what I saw with Hillary running for president in 2016," Kaine said this month on ABC News' "Powerhouse Politics" podcast. "We have a double standard for women."

"The hardest part of being on the ticket with Hillary in 2016 was just the endless display of outright misogyny or subtle double standards that demonstrated to me -- absolutely clearly -- why we haven't had a woman president and why the United States has still such a poor track record of electing women to national legislative office," he continued.

How to keep sexism out of the 2020 presidential race

Reynolds, of Emily's List, said the best way to end sexism in politics is to focus on the issues facing the country and the merits of a candidate's campaign and policies, not someone's likability or appearance.

A practical thing everyone can do, from voters to the media, is to ask themselves when looking at coverage of a candidate, "Would I make the same criticism of a man?" according to Reynolds.

"That's something I think we could all do a better job of, is to take a step back and say, 'Would this be a fair criticism of Joe Biden, of Mike Pence?,'" she said. "If it's not something we'd apply to a man then we need to realize that is sexist."

"The same thing applies to race," added Reynolds. "[Ask yourself], 'Would I apply this criticism to a white person, to a white woman even, that I'm applying to a Black woman?'" 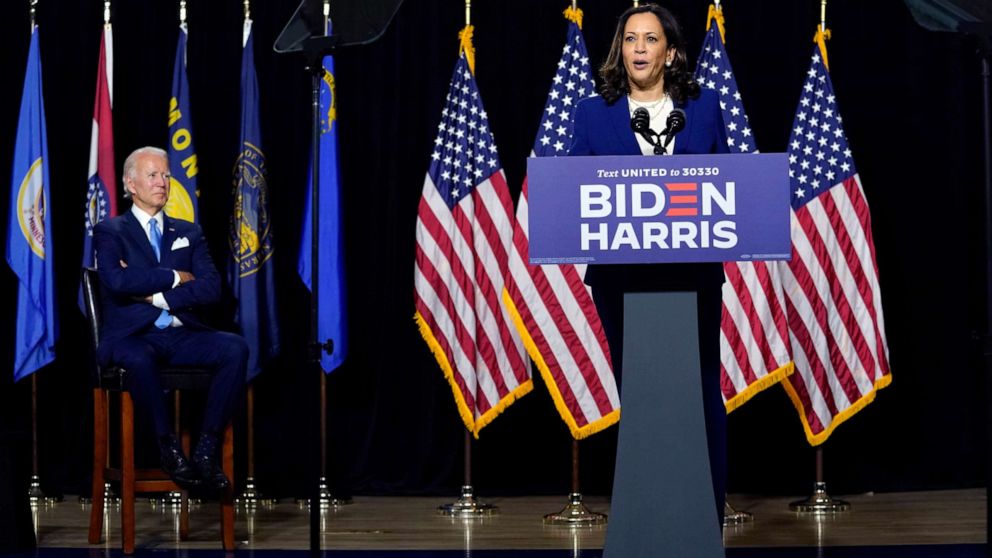 One women's group, Ultraviolet, created a 32-page how-to guide for covering women and people of color in politics in hopes of leading the conversation this election cycle away from racism and sexism.

"The reality is that women of color and women generally do get elected, but they have to overcome enormous obstacles and barriers that are patently unfair and a disservice to our democracy and culture," said Shaunna Thomas, the founder of Ultraviolet. "And it is a factor in determining whether or not they enter politics."

Ultraviolet's guide is focused on not just raising awareness about sexism in politics, but changing the coverage of women and people of color.

Here are three steps Thomas said everyone can take to help level the playing field for female candidates in 2020 and beyond.

1. Report: "When you spot disinformation or hate speech, report it. We need everybody's eyes on this. Join the campaigns being launched by organizations like Ultraviolet to hold social media companies accountable. We have to push back on those attacks when we see them, not just the people launching the attacks but the people and the platforms amplifying the attacks."

2. Don't amplify: "Name the misogyny and the racism, as opposed to just repeating what they're saying word for word. People don't see the critique as much as they see the content being repeated. If you're seeing Trump attack Kamala Harris, it's one thing to tweet out a repudiation, to hold Trump accountable, it's another thing to retweet him and give his attacks power in that way."

3. Educate: "The other really important way we can disrupt the efficacy [of sexism] is by equipping the average people, consumers of media and voters, with information they need to spot it on their own."