By Jacqueline Laurean Yates
Video by Brittany Berkowitz
Share —
Sign up for our newsletters to get GMA delivered to your inbox every morning!

Raise your hand if you have aimlessly scrolled through your social media feed just to fall down a rabbit hole that's left you online for longer than you anticipated? Guilty.

As many of us are practicing social distancing to help stop the spread of COVID-19, it's no secret that screen time on mobile devices, laptops and iPads has increased.

While this has quickly become the new normal, have you ever stopped to think about how all of the constant exposure to blue light could be affecting your skin?

Blue light, also known as high-energy visible light (HEV), is light emitted from all of our screens, and there is still ongoing research about its effects.

Board-certified dermatologist Dr. Whitney Bowe told "GMA" that natural light from the sun is one of the strongest sources of blue light. "The sun emits UV rays, infrared rays, visible rays or visible light, and blue light is part of physical light," she said.

Bowe also confirmed that blue light is emitted through screens we are commonly exposed to, in addition to LED lights, which can also carry blue light radiation.

MORE: Breaking out? Here's how to take care of your stressed skin at home

Can blue light have an effect on your skin?

The short answer is yes.

A 2010 study titled, "Clinical and histological effects of blue light on normal skin," revealed that no inflammatory cells and sunburn cells were visible on the eight healthy volunteers before or after five consecutive days of irradiation to visible blue light.

A more recent research study from 2018 suggested that long-term exposure to high levels of blue light could be associated with potentially harmful skin conditions.

Board-certified dermatologist Dr. Daniel Belkin of the Laser & Skin Surgery Center of New York explained to "GMA" that blue light is just next to ultraviolet in the electromagnetic spectrum, and the line between them is not necessarily sharp.

"Blue light has been shown to cause some of the same damage to a lesser extent, including the creation of cellular stress and induction of collagen breakdown," he said.

Alternatively, blue light can have a positive impact on the skin. Bowe pointed out that it can also help fight acne: "It reacts with a molecule in some of the bacteria that causes acne, and makes those bacteria die."

However, Bowe added that there aren't any convincing studies confirming that blue light is more effective than typical acne-treating ingredients such as salicylic acid and retinol or retinae.

The Journal of Investigative Dermatology suggested that blue light also has higher chances of causing hyperpigmentation -- uneven skintone or dark spots -- on skin of color.

Experts agree that the best defense against any possible harmful effects of blue light come in the form of sunscreen.

Engelman pointed out that mineral sunscreens specifically contain active ingredients such as titanium dioxide or zinc oxide, which work by sitting on top of the skin to deflect and scatter damaging UV rays away from the skin.

Belkin recommended that tinted sunscreens containing iron oxide, "the best protectant against blue light," are a great option as well: "Sunscreens labeled 'broad-spectrum,' though this means they cover most of the UVA range, do not cover all of it, especially the region near visible light, and therefore do not protect against any light in the visible range."

He continued, "We know from clinical experience that those with light-sensitive disorders, such as certain types of hyperpigmentation like melasma, often get worse despite regular use of broad-spectrum sunscreen due to the effect of blue visible light." 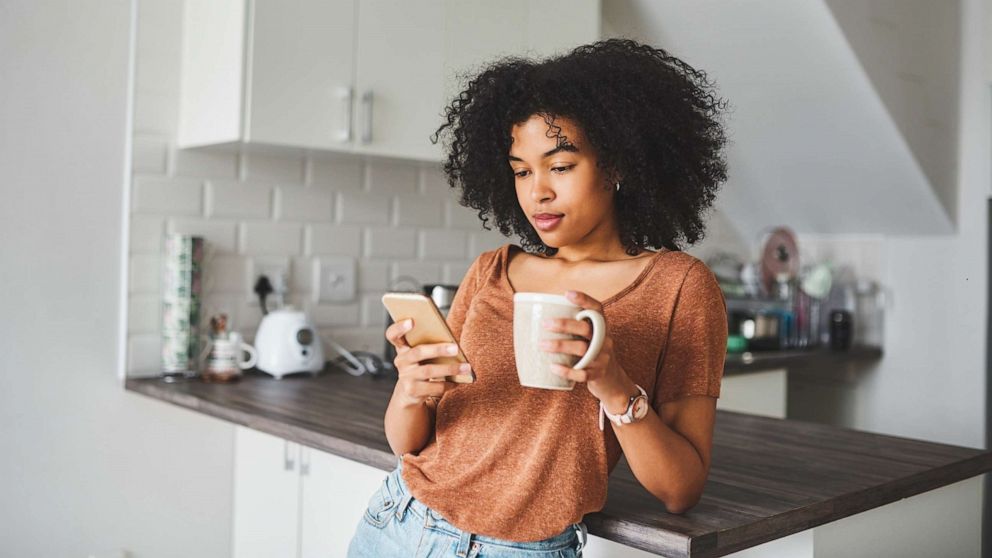 "Antioxidants work by pairing with free radical scavengers in search of a missing electron, so it neutralizes the damage if it were to pair with a skin protein instead," said Engelman.

(MORE: Waterless beauty is new eco-friendly trend we can all get behind)

Bowe advised that in addition to incorporating highly potent antioxidants such as vitamin C into your skincare routine, you should also be mindful to include it in your diet.

"Having lots of deeply colored fruits, vegetables, green tea or even dark chocolate are great sources of antioxidants," she said.

Other lifestyle changes include choosing to use a speakerphone option rather than pushing a mobile phone against your cheek while talking.

Most mobile devices also offer a night mode option that uses more yellow lights rather than blue lights to cut down on exposure.