This summer I accomplished the ultimate bucket list adventure: hiking through Volcanoes National Park in Northern Rwanda to see our closest living relatives, the endangered mountain gorillas of Rwanda.

In August, after climbing up the side of a vertical volcano for hours, past elephant tracks, golden monkeys and elusive buffalo, through thick bamboo and eucalyptus forests filled with red ants, stinging nettles and aggressive mosquitoes, I finally came face-to-face with Igisha family of mountain gorillas -- the largest group of gorillas in Rwanda. They are 34 of the 1,004 mountain gorillas left on earth.

At first hidden in the brush, the family suddenly appeared, napping and lazing around after their morning meal.

Five mature male silverbacks sat separately, surrounded by their immediate clan of female gorillas, sub-adults (or teen gorillas) and babies. They barely acknowledged me and my fellow trekkers.

One mother nursed her 6-day-old child as four other babies -- old enough to clamber around on their own -- played in a nest constructed around her feet. An adult female gorilla sucked her thumb as she slept while others calmly plucked bugs out of each other’s backs. It was a quiet, almost pastoral scene that was earth-shattering to the humans watching.

(More: Now you can stay in the 'Downton Abbey' castle for 1 night)

Perhaps because just a few years ago, these animals, which share 98 percent of our DNA, were almost banished from the planet due to poaching, loss of habitat and human encroachment. In 2010, the population was classified as critically endangered with only 480 gorillas left. Today, after concerted conservation efforts, they have bounced back to over 1,000 and have been re-classified as endangered.

Dian Fossey, who dedicated her life to these gorillas, once said, “Conservation of any endangered species must begin with stringent efforts to protect its natural habitat by the enforcement of rigid legislation against human encroachment into parks and other game sanctuaries.” 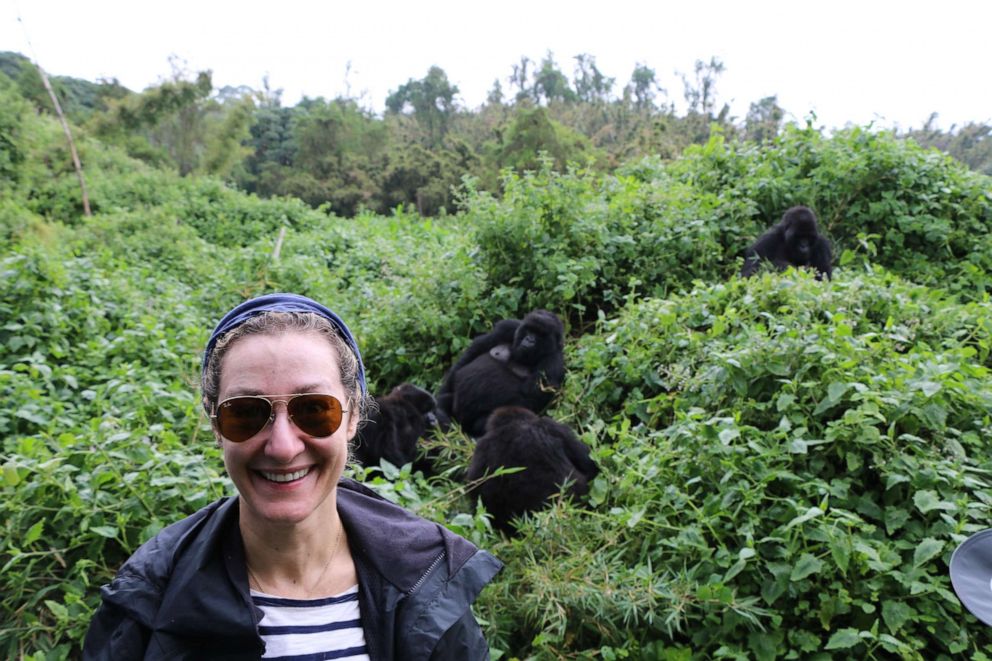 Paula Froelich
Trekking to see the mountain gorillas of Rwanda.

Nowhere is that more understood than in Rwanda, the central African country that has emerged like a phoenix from the ashes of a horrific civil war and genocide 25 years ago.

For more than a decade, the government has dedicated resources to buying back farmland in and around the park, training former poachers and farmers to work with the gorillas and building infrastructure to support the gorillas. Eco-tourism now accounts for 60 percent of Rwanda's economy.

(More: Tourist recalls being chased by a white rhino on South African safari)

The government has also partnered with eco-conscious companies like Singita, a conservation-based hospitality company which just opened Kwitonda Lodge and Kataza House near the town of Kinigi at the foot of the Volcanoes National Park. The property includes 178 acres that Singita purchased around the national park, and plans are in the works to buy more farms that encroach on the volcanoes.

"We've created this buffer zone," said Brad Murray, who along with his wife Kate, is co-general manager of the property. "Our plan is to extend this, the National Park to us. That is our plan, to keep going, and to take farmlands and bring them back into wildlife habitat."

He went on: "We have replanted 20,000 trees and are aiming for 250,000 -- and we've already had gorillas coming onto the property. One day we had 400 workers on site and we were walking when everyone just stopped, put down their tools, and were just staring ... a family of gorillas was walking across the buffer, just playing and rolling in the grass. So who knows? In two, three years when the reforestation program happens, we feel we could get a lot of gorillas down to the lodges."

Until the day the gorillas come down from the mountain, visitors will to continue to trek, an experience that costs $1,500 a day per person -- but is worth every penny. The hike itself can take up to five hours, depending on where the family you are assigned to has moved. One minute you are caught in a chilly downpour. The next you're slogging through a sunny and hot forest. Eight people are relegated to a group, which is assigned to visit a gorilla family for exactly one hour only. You're led by a team that consists of professional guides, trackers and porters -- many of them former poachers.

Part of the cost of the trek is dedicated to retraining locals to work with gorillas. This includes farmers, whose lands have been reclaimed, as well as poachers. On my hike my porter was a former poacher. Via our guide Charles, he explained, “It was a way to make money -- but this is better. The work is regular and we make more.”

Once we reached the gorillas, Charles went through the basic rules. “You must always maintain a distance of three meters, and if they come towards you -- move back,” he said. “Sometimes the babies or young adults will be curious and try and touch you, but do not touch back -- just be still.”

And for an hour, my fellow trekkers and I witnessed some of the greatest beasts in the world.