Trista Hamsmith's 18-month-old daughter, Reese, died in December, two months after Hamsmith discovered her daughter had swallowed a button battery, the small, round batteries found in many home devices and toys.

Now Hamsmith, of Lubbock, Texas, is on a mission to make sure no other parent has to suffer the pain and loss her family has experienced.

"When we thought everything was going to be fine, I just had this vision of advocating for the safety and awareness of button batteries with Reese by my side," Hamsmith told "Good Morning America." "Her being gone did not change my desire to want to protect other children and get this information out there."

"Every day we wait, another kid is going to ingest a battery," she said. "Had somebody [spoken out] before, our lives would look very different."'

Reese was 16 months old this past October when she developed cold-like symptoms, including a very stuffy nose, according to Hamsmith, who also has a 9-year-old daughter. 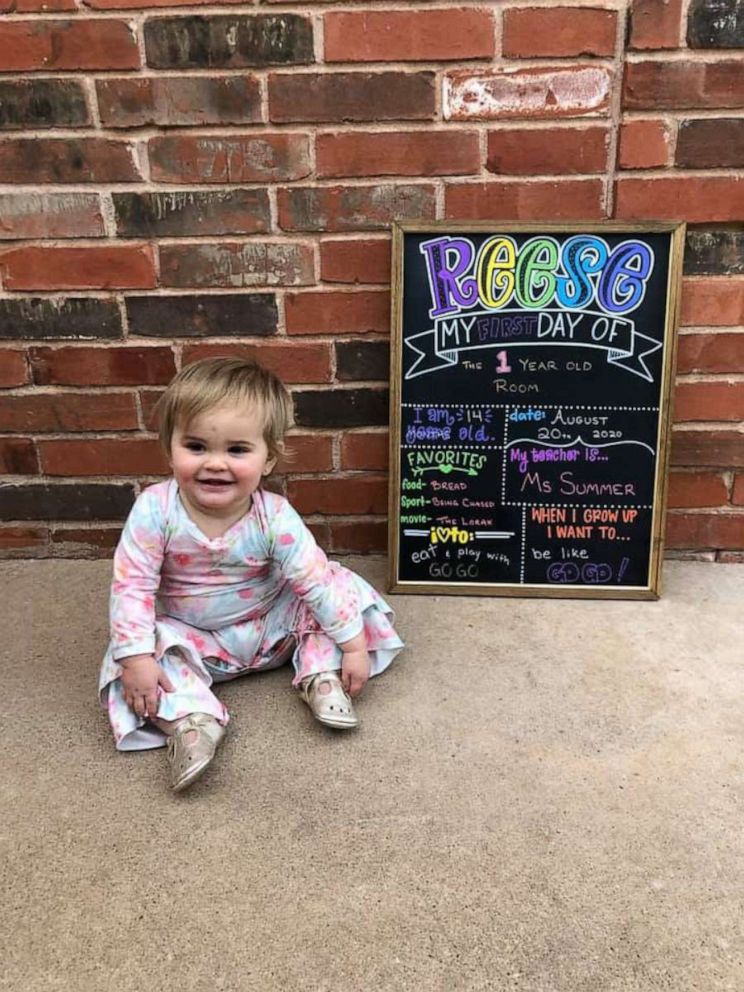 Hamsmith and her husband, Chris, took their daughter to see the pediatrician, who suspected Reese had croup, an infection of the upper airways, and prescribed steroids, according to Hamsmith.

Shortly after, the family discovered a button battery was missing from a remote control in their home. After looking online and discovering that symptoms of button battery ingestion -- including coughing, wheezing and chest discomfort -- matched those of Reese, Hamsmith and her husband rushed Reese to the emergency room.

There, an X-ray confirmed that a battery was lodged near the top of Reese's esophagus. The toddler underwent emergency surgery to remove the battery, and after a few days she was sent home from the hospital with instructions to stay on a liquid diet.

Hamsmith soon learned what she now wants other parents to know: Button batteries can continue to cause damage by burning tissue, even after they are removed.

When Reese did not improve, a CT scan confirmed she had a fistula through her esophagus and trachea that was created by the inflammation, according to Hamsmith.

Reese underwent another surgery to implant a gastronomy tube so she could receive nutrition, and she was placed on a ventilator.

“She came back sedated and on a ventilator, and that was the last time I saw my child like herself,” Hamsmith said. 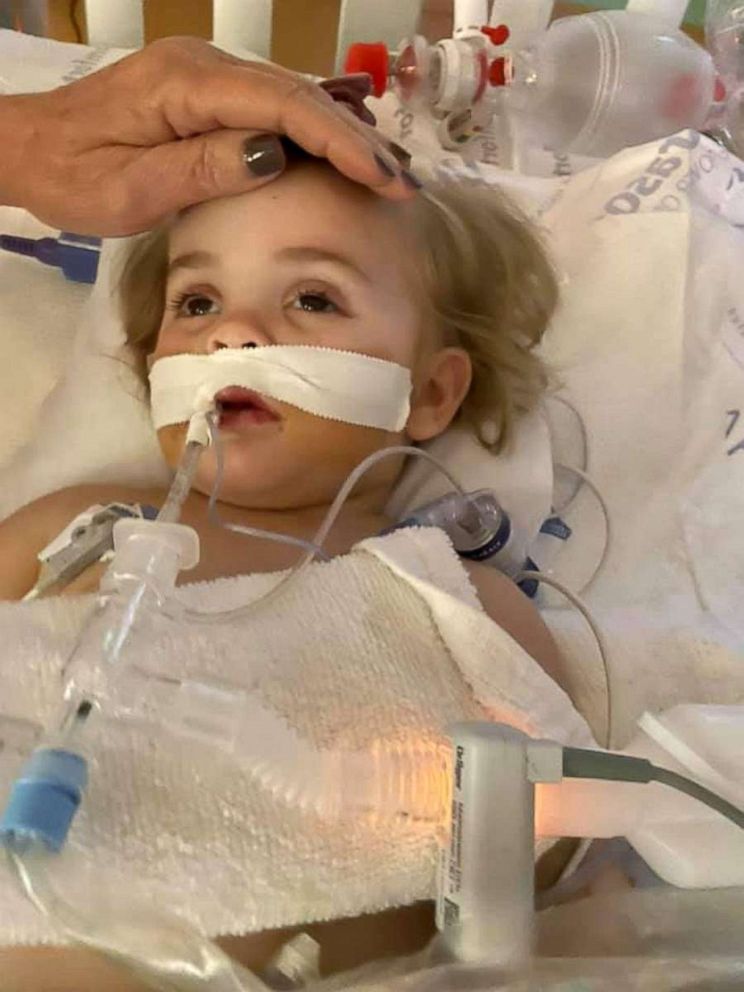 Trista Hamsmith/Reese's Purpose
Reese Hamsmith, seen prior to her passing, was hospitalized for two months before passing away in December 2020.

"She went back for surgery, and that was the last time she was not on sedation for the rest of her life," Hamsmith said, adding, "I wasn’t able to hold her, because her airway was so small, every single move was critical."

Reese spent the next six weeks hospitalized and undergoing various surgeries and attempts to try to save her life. She ultimately died Dec. 17, 2020, with her mom by her side.

"I finally got to rock her in a rocking chair for a while," said Hamsmith, who said she found inspiration to keep going and advocate for button battery awareness from a plaque in Reese's hospital room.

In the seven months since Reese died, Hamsmith has created a nonprofit organization, Reese's Purpose, to educate parents about button battery safety and to try to create change around how button batteries are protected in packaging and in the items in which they are found.

Hamsmith has testified before the Consumer Product Safety Commission (CPSC), created a national Button Battery Awareness Day (June 12) and is now calling on Congress to enact legislation that would create national standards for consumer products with button batteries. A Change.org petition launched by Reese's Purpose calling for legislation has nearly 80,000 signatures.

"The main thing is that 10 years down the road, if I hear about a kid dying of a button battery ingestion, I want to know that I did everything I could without a shadow of a doubt to help prevent and help put the knowledge out," Hamsmith said. "It’s a hidden danger."

What parents need to know

"It literally takes one second [for button battery ingestion to happen]," she said. "You can set your kid down, turn around and pick up a piece of laundry, and it’s happened."

More than 3,500 people swallow button batteries each year in the United States, according to the National Poison Control Center.

But the actual number of button battery ingestions each year is actually much larger because the incidents are vastly underreported, according to Dr. Kris Jatana, professor in the department of otolaryngology-head and neck surgery at Wexner Medical Center at Ohio State University and Nationwide Children’s Hospital. Jatana helped create the GIRC App, a global database by the Global Injury Research Collaborative for medical professionals to track the severity of injuries, including from button batteries.

Over the past year of the coronavirus pandemic, there has been a 93% increase in emergency department visits for battery-related complaints in school-age children, according to Jatana's research.

"I do think there is a lack of awareness among parents that these are severe hazards," he said. "We can’t fix the injuries that these batteries cause, so that’s what's led us to how can we prevent these injuries in the first place."

Here are three tips from Jatana and Hamsmith to both prevent and treat button battery ingestion injuries.

Hamsmith's advice to caregivers is to keep products that contain button batteries not just out of reach but also out of sight of children, especially those ages 6 and under, who are most at risk for swallowing a foreign object.

Jatana said to not only know where the button batteries are in your home, but to also to regularly check all electronic devices to make sure the battery compartment is secured.

2. Know the symptoms: Symptoms of swallowing a button battery may include fever, not wanting to eat or drink, irritability, wheezing, difficulty breathing, coughing, throat pain, choking, gagging, problems swallowing and vomiting, according to a button battery resource website created by Jatana and Nationwide Children's Hospital.

Children may also put a button battery in their nose or ear, which can also present dangers. Symptoms to look for include irritability, pain or swelling around the ears or nose, fever and fluid drainage or bleeding from the ears or nose, according to Jatana.

Children who ingest button batteries may also present no symptoms at all, which is why parents and caregivers should know the whereabouts of button batteries in their home at all times, noted Jatana.

3. Act quickly: Serious esophageal injury can occur within two hours of a child ingesting a button battery, before symptoms even start, according to Jatana.

"The clock is ticking from the moment the battery is lodged in the esophagus," he said.

If a child ingests a button battery, immediately call for help, either through 911 or the National Battery Ingestion Hotline at 800-498-8666, which is available 24 hours a day, seven days a week.

Parents and caregivers may also use honey to treat the child while waiting for medical help. Experts recommend giving 10 mL of honey every 10 minutes to children 12 months and older.

Jatana stressed not to delay going to the emergency room and said seeking professional medical help should be the top priority.