A mom in Canada is warning parents and caregivers after she says her young son ingested hand sanitizer thinking it was food.

Nikki Teixeira, of Manitoba, Canada, said her 18-month-old son, Logan, was with his grandmother last month when she handed him what she thought was a fruit puree pouch for a snack.

The pouch, packaged in cartoon branding for the Trolls movie, was hand sanitizer that Teixeira purchased for her 7-year-old stepdaughter.

"I had been shopping with my husband... and they had these hand sanitizers in the middle aisle packaged in cute packages and I had a 7-year-old stepdaughter going back to school and I thought that'd be perfect for her backpack," Teixeira told "Good Morning America." "The way it was packaged and displayed with hand sanitizers, I didn't even think of it looking like a food." 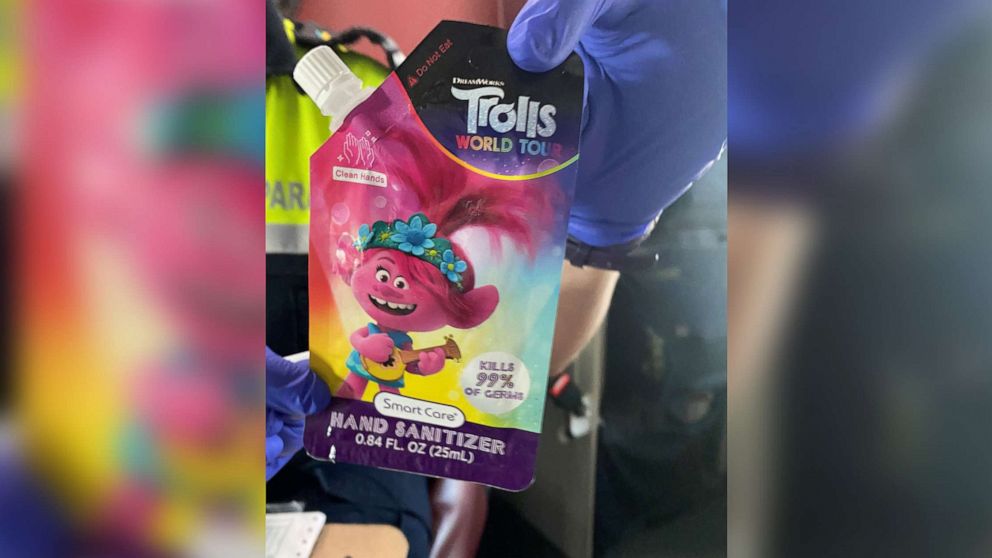 Courtesy Nikki Teixeira
A paramedic holds a pouch of hand sanitizer that Nikki Teixeira says her son ingested thinking it was food.

When her stepdaughter said she already had sanitizer for school, Teixeira threw it in her own bag, which Logan does not have access to.

Logan's grandmother, though, had the bag on the day that she cared for him, and handed him the pouch thinking it was a snack that Teixeira, her daughter, had packed.

"He took a sip and immediately turned red and started coughing, so she grabbed it from him and then immediately saw it was hand sanitizer," she said. "She called her neighbor and called 911 because he started to get a little bit dozy and out of it, and then five minutes later he was falling asleep."

Teixeira said that by the time paramedics arrived minutes later, Logan was alert but he was taken by ambulance to a local hospital as a precaution.

The toddler did not sustain any medical complications from ingesting the hand sanitizer, according to Teixeira, who said her son's only lingering symptoms were that he was irritable and had little appetite for the rest of the day.

She shared her experience on Facebook in an effort to warn other parents and caregivers.

"Please *SHARE* with as many people as possible to raise awareness as schools are reopening soon and the hand sanitizers will be in circulation," Teixeira wrote on the post, which has now been shared hundreds of times.

"The way that it's positioned in the aisle made it easy to buy and it's alluring and cute," Teixeira told "GMA." "I don't want it to happen to anybody else."

Not long after Teixeira posted on Facebook, the company that makes the hand sanitizer, sold under the brand Smart Care, announced it had removed the product from store shelves.

"We were recently made aware of a concern expressed by a parent regarding our hand sanitizer sold in a 0.84-ounce pouch. We took this concern seriously and immediately removed the product from retail," a spokesperson for the company, Ashtel Studios, told ABC News in a statement. "As safety is our No. 1 priority, we have switched out this packaging for our bottled hand sanitizer to eliminate any misconception or concern. We regret any inconvenience this may have caused."

Teixeira's warning to caregivers comes as the U.S. Food and Drug Administration (FDA) is also warning consumers about hand sanitizers that are packaged in everything from children's food pouches to beer cans, water bottles and juice bottles.

"I am increasingly concerned about hand sanitizer being packaged to appear to be consumable products, such as baby food or beverages. These products could confuse consumers into accidentally ingesting a potentially deadly product. It's dangerous to add scents with food flavors to hand sanitizers which children could think smells like food, eat and get alcohol poisoning," FDA Commissioner Stephen M. Hahn, M.D., said in a statement last month. "Manufacturers should be vigilant about packaging and marketing their hand sanitizers in food or drink packages in an effort to mitigate any potential inadvertent use by consumers. The FDA continues to monitor these products and we'll take appropriate actions as needed to protect the health of Americans."

In its warning to consumers, the FDA noted that hand sanitizer can be toxic when ingested, and shared other complications that may occur when hand sanitizer is misused.

"The FDA continues to see an increasing number of adverse events with hand sanitizer ingestion, including cardiac effects, effects on the central nervous system, hospitalizations and death, primarily reported to poison control centers and state departments of health," the agency said in a news release.

Throughout the coronavirus pandemic, which has spiked the sales of hand sanitizer, the FDA has also warned consumers about hand sanitizers that may contain methanol, a colorless liquid that can be absorbed into the body through inhalation, ingestion, skin contact or eye contact, according to the Centers for Disease Control and Prevention (CDC).

MORE: FDA issues warning about 9 hand sanitizers made by this company

The FDA now lists at least 75 different brands of hand sanitizer to avoid.

Washing hands with soap and water is always preferred over the use of hand sanitizers, according to the American Association of Poison Control Centers (AAPCC).

When alcohol-based hand sanitizer is used, it should contain at least 60% alcohol, according to the AAPCC.