Making plans for summer in the time of the coronavirus pandemic is a parenting dilemma.

States, cities and towns are reopening as at least a dozen states have seen record highs of new COVID-19 cases.

Some camps are closed, others are open. Some families are still quarantining and others are hosting birthday parties and sleepovers. The messaging that kids don't seem to be as severely impacted by COVID-19 as adults but they do seem to be asymptomatic carriers of the virus can be confusing for parents too.

"A lot of these decisions for parents are sort of very contextual, depending on their own situation," Dr. Sean O’Leary, a Colorado-based pediatrician and vice chair of the American Academy of Pediatrics' Committee on Infectious Diseases, told "Good Morning America" about the choices parents are being forced to make during the pandemic.

"In families where an older grandparent lives in the home or there are people with chronic health conditions that are risk factors living in the home, those families are probably making different decisions than families where there are young parents and they are healthy," he said.

O'Leary stressed the most important thing for parents to remember is that the threat of COVID-19 is still here, even amid summer fun, saying, "The virus is not any less deadly than it was when we were under lockdown."

O'Leary and Dr. Wendy Sue Swanson, a Wisconsin-based pediatrician, spoke with "GMA" to share tips for parents to keep kids active but safe this summer.

Going to beaches and pools

Beaches and pools present good opportunities for summer fun because they are outdoors and relatively low-risk as long as they are not crowded, according to both O'Leary and Swanson. 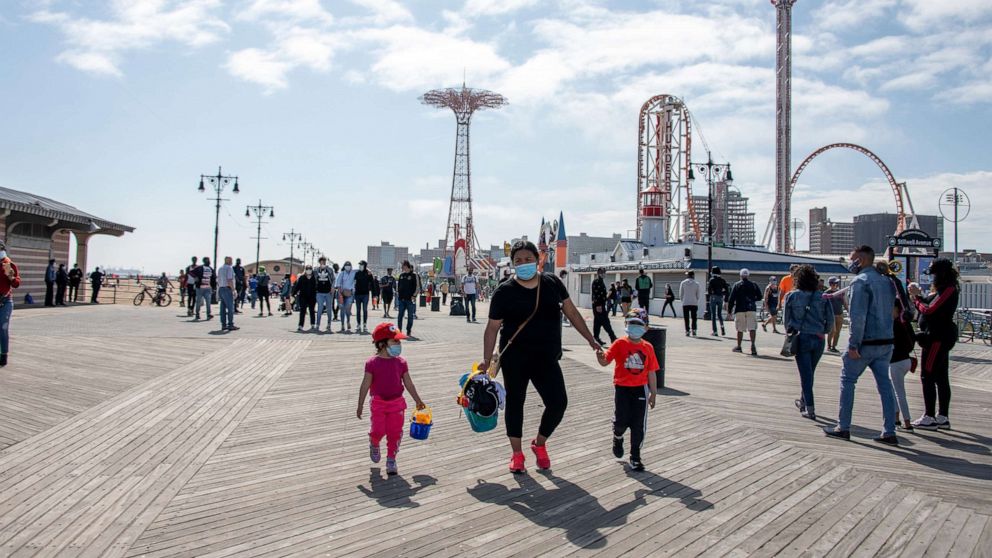 Alexi Rosenfeld/Getty Images, FILE
In this May 25, 2020, file photo, people wearing masks walk on the boardwalk at Coney Island with a view of Luna Park in the background in New York.

In terms of public pools, O'Leary added, "If you’re able to go into a setting where you can maintain physical distancing and you’re using hand hygiene then that might be a reasonable activity, but a crowded pool is probably not a great place to be."

If you are not able to be at least six feet away from other people, everyone in the family over the age of 2 should wear a mask, according to both O'Leary and Swanson.

And if children need to use restrooms at beaches and pools, or any public places, Swanson said parents should accompany their child to the bathroom to make sure they are in and out fast, do not touch their faces, wash their hands immediately after using the restroom and use a paper towel or wipe to open and close the restroom door.

Going on play dates, to playgrounds

Allowing another child into your home or sending your child to another family's house each presents a high risk of exposure to coronavirus but parents can help mitigate the risk, the experts said.

"I can’t really recommend inside play dates right now," she said. "It’s the kind of interaction that we worry about the most, which is inside and longer term, repeated contact and for more than 15 minutes." 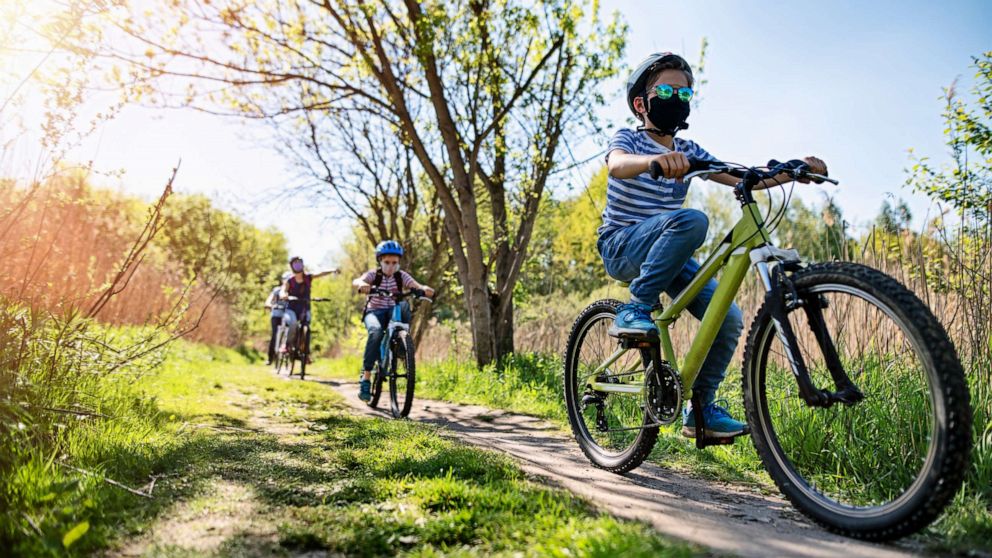 Imgorthand/Getty Images
A mother and kids are enjoying a bike trip together during the COVID-19 pandemic.

Parents should also consider the quarantine practices of the family their child is having a play date with and what is happening in their community in terms of the levels of COVID-19 cases and the rates of transmission, according to O'Leary and Swanson.

For playgrounds, O'Leary said it is relatively low-risk for children to use public play equipment as long as the area is not crowded and proper hand washing protocols are followed before and after use. When it comes to surfaces, one study found the virus can live on plastic and stainless steel for up to 72 hours, though it is unclear whether the amount of virus on those surfaces would infect anyone.

Proper hand washing and physical distancing are things parents should pay attention to for themselves at playgrounds also, according to O'Leary.

"In those settings the bigger risk is probably not the 4-year-olds that are within three feet of each other at the playground -- it’s the adults talking next to each other without masks on," he said. "Adults wearing masks and adults maintaining physical distance is probably more important at this point."

Swanson said she sent her own two sons to a tennis day camp but would not have allowed them to attend sleep-away camps.

"As we’re understanding more, it’s these intense, long-lasting contacts that tend to be most risky," she said. "I think it’s best to avoid those kinds of exposure."

Swanson did not require her sons to wear face masks at tennis camp because they could physically distance from others while playing. She also made sure the camp had a small number of campers and kept kids physically distant during break times like lunch.

She also packed her kids' own lunches, with a mini-hand sanitizer included, and had her sons shower and change when they got home, examples of just some of the precautions parents can take.

As with any decision about whether to go out in public during the pandemic, parents considering sending their child to a camp must take into consideration what the COVID-19 outbreak is like in their area and whether anyone in their family is high-risk, according to both O'Leary and Swanson.

"It’s a very personal decision," said O'Leary. "Day camps are certainly safer than residential camps, but residential camps, a lot of those are potentially opening and so you want to find out how are they managing that with the sleeping quarters. Is it going to be crowded? What’s the risk of that?"

O'Leary said the No. 1 question parents can ask of camp providers is simply, "What measures are you taking to keep my child safe?"

"You can get a sense of how well thought out is their plan based on the basic principles of maintaining physical distancing, hand hygiene and in some cases masks," he said, noting that outdoor camps like tennis and golf are going to be more low-risk than indoor camps like theater and dance.

"We don’t have good studies on does doing a temperature check daily on kids makes a difference," he said. "If you can do it in a low-risk fashion and it’s pretty straightforward to do, where you’re not creating risk to do it, it’s not harmful. I think certainly symptom checks [asking kids and their parents if they have specific COVID-19 symptoms] is important."

Traveling by car vs plane

While airplanes are generally safer for long-distance travel due to the number of car accidents each year, in terms of preventing family members from contracting or spreading COVID-19, it is safest for families to travel this summer by car, according to O'Leary.

Spending time with other families

Again, families have to make a decision about what level of risk they're willing to expose themselves to in order to socialize with friends, according to Swanson.

"If I was choosing to be with another family, I would choose the one with the most similar philosophy to my family, which is we are quarantining as much as possible and we are always wearing masks," she said, adding that her recommendation is to socialize with other families outside and to stay physically distant when doing so.

"The one reminder on that though is that kids are kids and developmentally it’s almost impossible to think that a 7-year-old seeing his friend for the first time is going to stay six feet apart," Swanson said. "It's a false sense of security to believe that you can keep kids apart so be mindful of it and careful about it."

1. Wearing masks is necessary for kids too: "Without question, if your child is over 2 and you’re going to go to a public place, I cannot say it strongly enough that I believe you should be all wearing masks," said Swanson. "It signals that you care about your community. It signals that you want your children out but you don’t want them to be a threat to someone else, and it likely decreases the risk that even if they do have asymptomatic disease, they aren’t going to pass on an infection to someone."

"It’s not meant to be oppressive," she said of mask wearing. "It’s there for a very good reason."

2. Think and plan like a germophobe: "If you think about being around a family that has just gotten over a stomach bug … think about how careful you are," said Swanson. "It’s a really good model."

In addition to physical distancing and mask wearing, Swanson recommends parents have wipes and hand sanitizers on hand at all times and use soap and water to wash hands whenever possible.

"Don’t let [the coronavirus pandemic] take away from how you’re using a car seat, how you’re using sunscreen, how you’re introducing foods to your baby, getting vaccinations," said Swanson. "This is still a time to think of the enormous value of all those other efforts that are really meaningful for children all the time."