Zibby Owens is a GMA contributor. She is also the host of the award-winning podcast Moms Don’t Have Time to Read Books, co-founder of Zibby Books, creator of the Moms Don’t Have Time To content and community site, and founder of the Zcast podcast network. Her children’s book Princess Charming debuted in April and her memoir Bookends: A Memoir of Love, Loss, and Literature, comes out July 1.

It’s here! The fog! The intermittent humidity mixed with fluctuating temperatures! June! This hopeful season of graduations, end-of-year celebrations, teacher gifts, winding down and starting up again brings many exciting, emotional reads. For many of us, summer will open up a little more time for great books. Personally, I can’t wait to have more space in my iCal and in the environment around me as my kids’ summer vacations begin. Pop into your local indie bookstore this summer and browse the many new – and old! – releases including these winners. 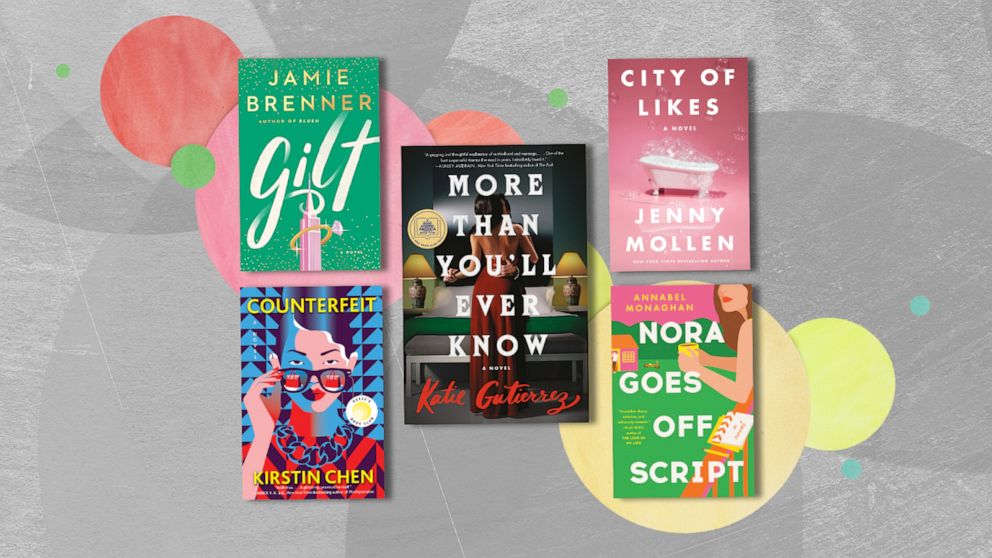 ‘More Than You’ll Ever Know’ by Katie Gutierrez

A married mom of twins and international banker based in Texas marries yet another man in Mexico City – and then one husband is arrested for murdering the other. Years later, a reporter explores why that mother would’ve been willing to risk everything for another man. A gripping family drama, this book will make you question the role of marriage, family, and love.

"More Than You'll Ever Know" is also the "Good Morning America" Book Club pick for June. Read an excerpt here.

‘My Life in the Sunshine: Searching for My Father and Discovering My Family’ by Nabil Ayers

When a white, Jewish ballerina decided to have a child with a famous Black jazz musician, she knew the dad wouldn’t be involved in raising their child. What she didn’t know was that their son, Nabil, would grow up to inherit the musical talent of his famous father and want to connect with him. So goes Nabil’s beautiful, musical memoir about what it means to be a son, how much DNA versus in-person parenting shapes a loved one (nature vs. nurture), how music unites, and what extended family like half-siblings found later in life can truly teach us.

Somehow Jamie Brenner launches a new, captivating beach read every single summer centered on a different location. This year she has taken us to Cape Cod (thanks, Jamie!), Provincetown and New York’s Fifth Avenue in a slightly darker tale about a jewelry business family of three sisters whose bonds fracture after an event-gone-wrong; so wrong that one of the sisters dies. Years later, the daughter of the late sister, shut out of the family after the accident, decides to come back and reclaim what is rightfully hers. The road to happiness is not paved in gold in this case.

Ava Wong’s life looks perfect. She’s a successful lawyer. Her husband is a surgeon. They have a wonderful home and a young son. But does anything ever live up to how it appears?! Totally bedraggled and dealing with the dregs of her marriage, Ava is ripe for an intervention which she gets in the form of her old roommate Winnie coming on the scene, now running a counterfeit scheme of Birkin bags. Would Ava be willing to loan her a passport? And what happens if Winnie disappears as suddenly as she appeared? Ava may be willing to take those risks.

Literary darling Sloane Crosley can do no wrong. Whether she’s protesting that she was told there would be cake or wondering how we got her number, Sloane’s essays have endeared her to her countless fangirls. Now in her novel, “Cult Classic,” she struts her narrative chops by tackling ghosts of past loves, which the protagonist’s best friend and boss may have a hand in. An insider's look at a group of friends dealing with layoffs and love, “Cult Classic” is sure to become one.

‘Dinner for One: How Cooking in Paris Saved Me’ by Sutanya Dacres

Jamaican-born, Bronx-bred Sutanya Dacres married a Frenchman and moved to Paris in her twenties. It felt too good to be true! And it was. To mend her post-divorce broken heart, she decides to cook for herself in Montmartre, befriend Parisians, and discover how to be a Black American woman living in Paris. A new take on self-care, Sutanya’s journey will take lucky readers on an intercontinental voyage in food, love, loss, and rediscovery in her debut memoir.

Allison thought she’d be okay; she’d finally escaped her Hollywood boyfriend and had bought a beach cottage with savings from years of waitressing and writing. But then a massive hurricane hits and destroys her home. A cast of dubious male characters enters the scene as she plots her path which she hopes involves a swimming pool (see: “Very Fine,” Marcy’s fabulous last novel, too).

‘It All Comes Down to This’ by Therese Anne Fowler

Three grown daughters cope with the imminent death of their mother who has taken pains to ensure they split the Maine cottage equally after her passing. When an ex-con enters the picture, these accomplished women – a journalist/aspiring novelist, a pediatric cardiologist, and an influencer - face an ending none of them anticipated. Bestselling author Therese Anne Fowler, whose novels "Z" and "A Good Neighborhood" are simply fabulous, has done it again.

‘How to Raise an Antiracist’ by Dr. Ibram X. Kendi

It’s never too early to teach the next generation how to do everything better. Dr. Kendi’s internationally bestselling book, “How to Be an Antiracist,” was out in the world while he was confronting the birth of his first child, a daughter who he wasn’t too eager to teach about the horrors of racism. Told in narrative with research and personal reflections by life-stage for kids, Dr. Kendi shares, coaches, and teaches how to make a difference early in this absolutely essential read for parents, teachers, and caregivers.

‘For You When I Am Gone: Twelve Essential Questions to Tell a Life Story’ by Rabbi Steve Leder

Rabbi Leder’s memoir, “The Beauty in What Remains,” was a tonic for the grief of the pandemic. His follow-up has actionable steps to share our most precious belongings with our loved ones long after we’re gone: our words. In fact, our thoughts, feelings, stories, and advice are the most meaningful parts of us that can live on after we’ve passed away. Why not spend time now recording this? Rabbi Leder reminds us that this is the greatest gift ever – with no inheritance tax!

‘City of Likes: A Novel’ by Jenny Mollen

Everyone loves a “Cluleless” makeover story when a wannabe gets taken under someone’s wing and turned into the best version of themselves. This happens in “City of Likes,” brilliant and hilarious author Jenny Mollen’s first novel. The wife of the Soho House-like membership club director finds herself adrift in New York City navigating the mom traps and travails of the city-set. That is until she becomes the pet project of an uber-mommy-influencer. But where, exactly, are her adorable kids!? Feeling like she just can’t get anything right, Megan takes a job (internship?!) to promote CBD bath bombs, but what bombs might just be her own career – and friendship.

‘Nora Goes Off Script: A Novel’ by Annabel Monaghan

A divorced romance author sells a script based on her own marriage downfall which ends up being filmed as a mega-movie with the “Sexiest Man Alive” starring in it. But when the production ends, the actor proposes staying on her 100-year-old farm with her for $1,000/day for seven days. What happens next? Find out. Meanwhile Annabel’s book, “Does This Volvo Make My Butt Look Big?” is one of my favorites!

James Patterson is the consummate storyteller. He makes no apologies for his conversational style, the way he presents information, and leans into the everyman’s voice he has channeled so well, especially his quick wit and sense of humor. I didn’t know about the tragic loss of his first love. I didn’t know about his family history, the mysteries, and what they all preferred to ignore. His tales of reluctant brilliance in the glamorous advertising world were like “Mad Men” meets “Sex and the City.” And clearly he’s not even close to running out of ideas. James’s support of the indie bookstore community is truly unparalleled. And yes, there’s some Bill Clinton and Dolly Parton thrown in. A quick but truly thought-provoking and enjoyable memoir, James’s reputation as storyteller extraordinaire is well earned.

I’ll read anything Lisa Taddeo ever writes. After finishing “Three Women,” her #1 New York Times bestseller, I went online and scoured the Internet for any other essays or short stories she’d written. The tales in Ghost Lover don’t disappoint. From dating app recognizance to ERs and parties, these nine tales give us just the right dose of Lisa’s brilliant voice.

Katy Tur’s parents were trailblazers; they famously revolutionized how news was documented, reported, and delivered. Katy would be scooped up as a little girl and plopped into the news chopper with her parents to cover, say, the latest California wildfires. Her dad’s well-known but never addressed physical violence towards her mother was paralyzing in their family – until it wasn’t. Plot twist? Her dad later transitioned to being a woman. Now Katy is a famous journalist in her own right, even enraging and tantalizing Donald Trump as she covered his campaign and presidency, braving physical harm to herself in her doggedness to report the facts. This fast-paced narrative is fascinating, horrifying, and ultimately a fantastic read.