Zibby Owens is the creator and host of podcast "Moms Don’t Have Time to Read Books," a publisher, and the author of "Bookends: A Memoir of Love, Loss, and Literature." She is a regular contributor to GMA.

Attention readers: summer is almost over! How can this be? I look forward to summer all year long. But as the sunshine beats down and the humidity frizzes our hair and snatches our energy, we can still squeeze in a few more books before reality sets in again come September. So shake out a beach towel, lick some sweet ice cream and delve into a few last stories before the school season resumes. 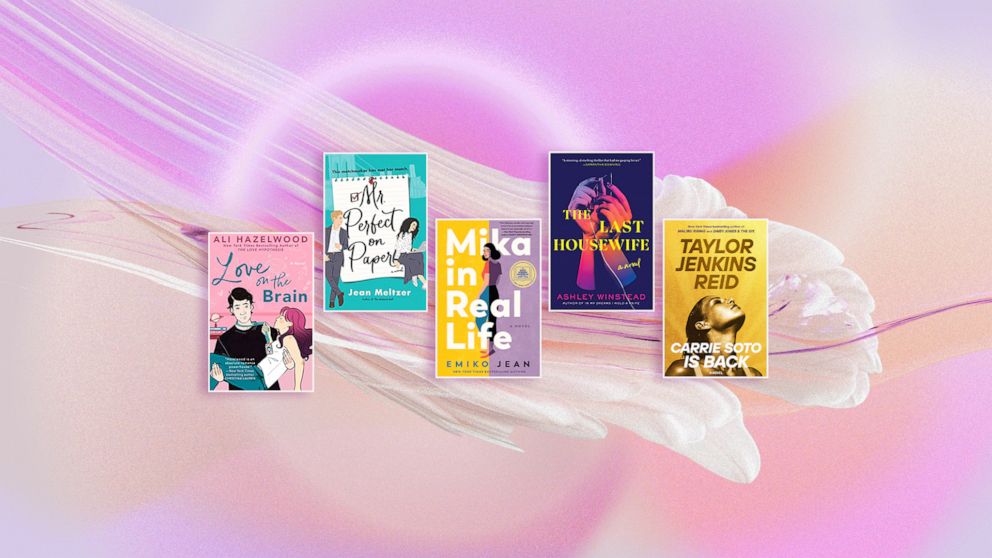 In "Mika in Real Life," Emiko, a former candle maker, florist, and entomologist (!), introduces us to Mika Suzuki, a 35-year-old who is a massive disappointment to her traditional Japanese parents. When Mika’s daughter, who she gave up for adoption 16 years prior, calls her out of the blue, she paints a rosier picture of herself than reality suggests. But, could her fibs lead to a renewed relationship with her daughter's birth father and more?

Kwame Alexander is the bestselling author of "The Crossover series," a National Book Award longlist nominee and the winner of a bazillion industry awards. He's also a poet, publisher, visionary and a dad. Now, he has reinvigorated his thriving series -- written as a novel-in-verse good for YA and parents alike -- as a graphic novel illustrated by Dawud Anyabwile. It’s about 12-year-old boy, Nick, who uses words to help him through family and friend issues. There’s even a rapping librarian involved.

Growing up Black in the '90s and early 2000s in Dallas, Kendra navigated race, class and gender barriers at every step. Kendra wrestles with concepts like religion, beauty, rules, trauma, and more in this original work by a bold new voice.

I still feel like I’m inside of "Room," the bestselling novel penned by Emma Donoghue that was also turned into a film. It was one of the most powerful, original stories I’ve read, particularly where the claustrophobia of parenting is concerned. Now Emma has taken the narrative in another direction: onto a boat in seventh-century Ireland on which a priest and two monks sail to find the right place for a monastery. What they find is an island inhabited only by birds. How do the three of them fare? Find out in Emma’s mesmerizing prose.

'Love on the Brain' by Ali Hazelwood

This is not your typical rom-com. Ali Hazelwood (pen name!) is a neuroscientist herself with a Ph.D. and full teaching career at an esteemed U.S. university, so of course her protagonist shares her deep scientific knowledge. A scientist obsessed with Marie Curie, Bee gets a promotion and then realizes she’ll have to lead a research project with Levi, a former colleague who wasn’t exactly kind to her (his reaction to when she asked him about her looks went viral on their campus). What will happen when the two of them are thrown back together?

Okay, I will not be giving this to my mom for Mother's Day this year. But actually, I could because it’s that good. Jennette starred in hit shows "iCarly" and "Sam & Cat," but I wouldn’t have known from her upbeat on-screen personality that she was secretly battling addiction, eating disorders and more. Written in compulsively readable prose, Jennette’s memoir is one of the bravest books about eating disorders I’ve ever read, coupled with the effects of having a narcissistic mother. Totally fabulous and unforgettable.

Jean Meltzer is the bestselling author of "The Matzo Ball" and, by her own admission, is the only Emmy-winning, chronically ill and disabled, rabbinical school drop-out. Her latest book, "Mr. Perfect on Paper," features Dara, a matchmaker who created and runs a Jewish dating app. When she can’t find "Mr. Right" herself, Dara’s bubbe (grandmother) shares her checklist for "The Perfect Jewish Husband" on national TV, inspiring Chris the newscaster to turn her hunt into a show. But then the two of them start getting along so well that …

Joyce Carol Oates has written a captivating thriller involving a privileged, white, suburban Detroit housewife named Hannah in the 1970s. Hannah has an affair with a man she meets at a charity gala, because, as Oates told me in a recent interview for my podcast, "well, because she was quite bored." No one saw Hannah for herself, not even her two adoring children. So at the cusp of 40, with her looks still on her side, she tried something new to feed her need for love and attention. Meanwhile, in the news "the Babysitter" child serial killer (ripped from the headlines) lurks in the background. I could not put this book down!

'Room and Board' by Miriam Parker

Associate publisher of Ecco and author of "The Shortest Way Home," Miriam Parker has penned a beautiful story about second chances set on a college campus. Gillian was a successful Manhattan-based publicist … until she wasn’t. She then decides to become a "dorm mom" at a prestigious Sonoma boarding school which seemed to be going well until a scandal threatened to ruin it all for her … again.

'Carrie Soto is Back' by Taylor Jenkins Reid

Did anyone else see that there were tennis-clad cigarette girls lined up at Wimbledon handing out pamphlets with excerpts of bestselling author Taylor Jenkins Reid's new novel "Carrie Soto is Back?" Brilliant! Wish I’d thought of that. As fans of "Malibu Rising" (like me) may remember, Carrie, the protagonist in Reid's latest novel, made a cameo. In this book, the championship-winning female tennis player comes out of retirement to defend her own record with her father as coach. We get to join Carrie on her final season and see if she can do it -- or if that’s even the "point."

'All Signs Point to Paris: A Memoir of Love, Loss, and Destiny' by Natasha Sizlo

Debut memoirist Natasha Sizlo works at a Los Angeles-based real estate company but wrote this memoir on the side. Divorced, bankrupt, heartbroken, and coping with the imminent death of her beloved father, Natasha consulted an astrologist who changed her life. She set out to find the man of her dreams who was born on November 2nd, 1968 in Paris, perhaps not her ex who was born on the same date. This memoir reads like a novel in its propulsive readability and intrigue. I fell in love with Natasha on the page and when I met her I connected with her instantly. Perhaps it was all in the stars.

'A Map for the Missing' by Belinda Huijuan Tang

A debut novel by a graduate of the Iowa Writers' Workshop, "A Map for the Missing" is a look into Chinese culture, relationships across generations, friendship, and tragedy. Tang Yitian, who has lived in the U.S. for almost 10 years, finds out his father has disappeared from their village in China and sets out to find him along with an old flame.

"Perish" is a compelling, emotional debut novel by Latoya Watkins, Ph.D., about a Black Texan family, inherited trauma and intergenerational violence. The choices the matriarch of the family, Helen Jean, has made over time have ripple effects all the way up until her death as a grandmother as seen in four family members with alternating storylines. This is one reunion that family saga readers will flip pages to read more about.

'The Last Housewife' by Ashley Winstead

A cult. A murder. A podcast host. These are the ingredients in Ashley Winstead's captivating new thriller about Shay Evans who, along with her college friend Laurel, managed to escape the cult-like web of their senior year. But, when Laurel is found murdered eight years later, Shay, along with the podcast host who broke the news, has to go back in to really find her way out.