"Celebrating America" was hosted by Oscar-winning actor Tom Hanks and took place on the steps of the Lincoln Memorial in Washington, D.C. It was organized in lieu of traditional concerts and inaugural balls due to the coronavirus pandemic. 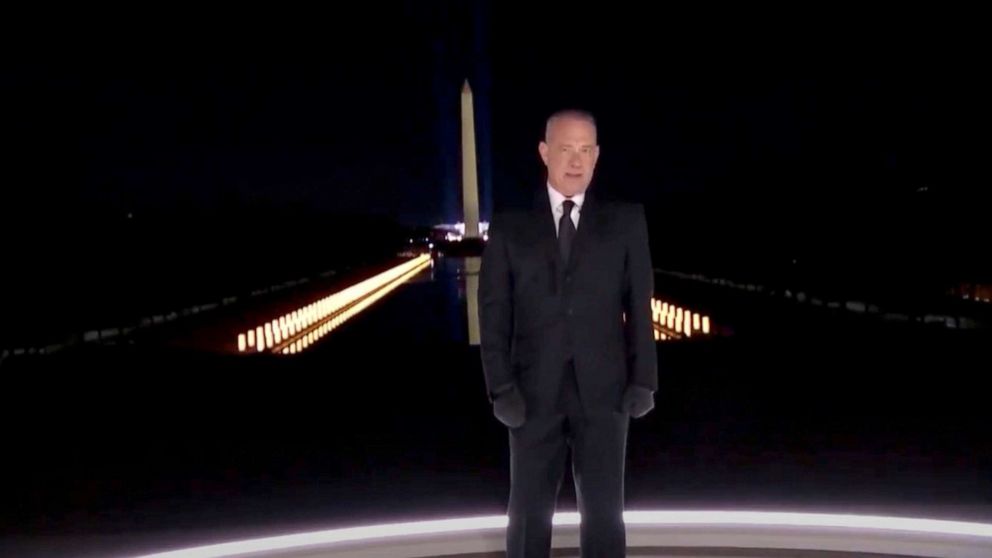 Biden Inaugural Committee via Reuters
Tom Hanks hosts the "Celebrating America" event at the Lincoln Memorial, during the inauguration of Joe Biden as the 46th President of the United States in Washington, Jan. 20, 2021.
MORE: Biden inauguration live updates: Biden takes over at White House

"Inauguration Day is about much more than the swearing-in of our next national leaders. This day is about witnessing the permanence of our American ideal," said Hanks.

Among the A-list performers were John Legend, Katy Perry and Justin Timberlake, who performed "Better Days" alongside singer-songwriter Ant Clemons. 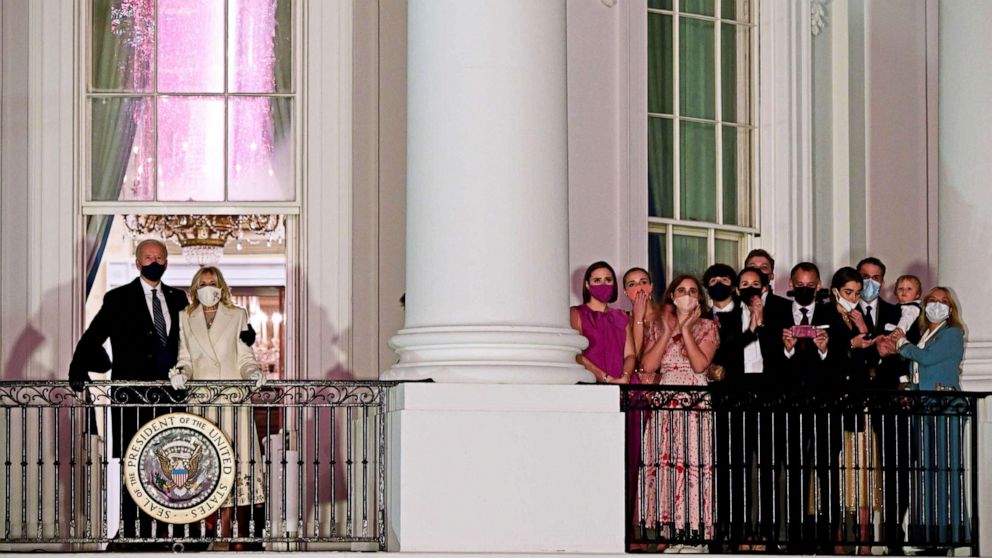 Jim Watson/AFP via Getty Images
President Joe Biden and First Lady Jill Biden appear on the Blue Room Balcony as they and family members watch fireworks from the White House in Washington, Jan. 20, 2021. 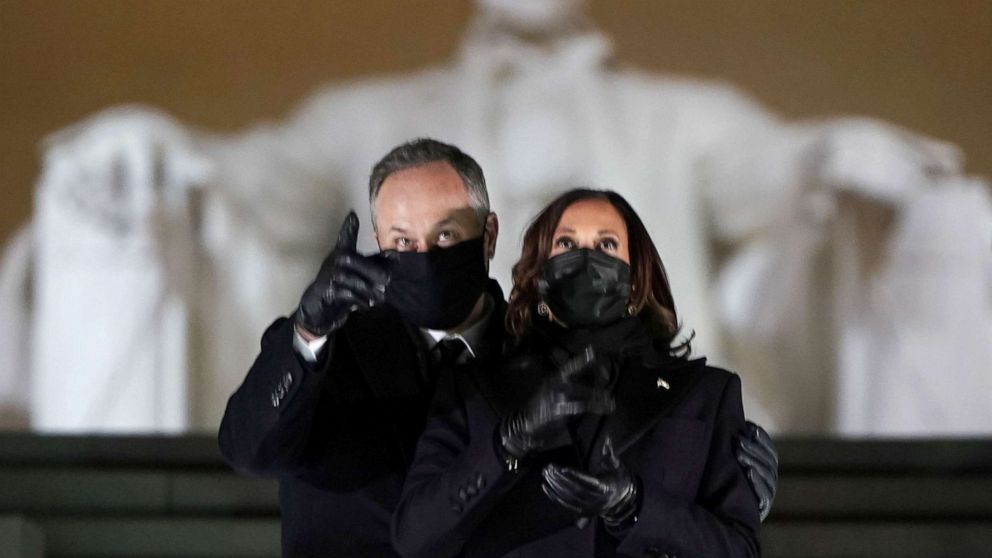 The event also highlighted first responders and essential workers around the country.

Kicking off the evening was Bruce Springsteen, who performed from the steps of the Lincoln Memorial in Washington, D.C.

Here's a look at all of the night's performers: 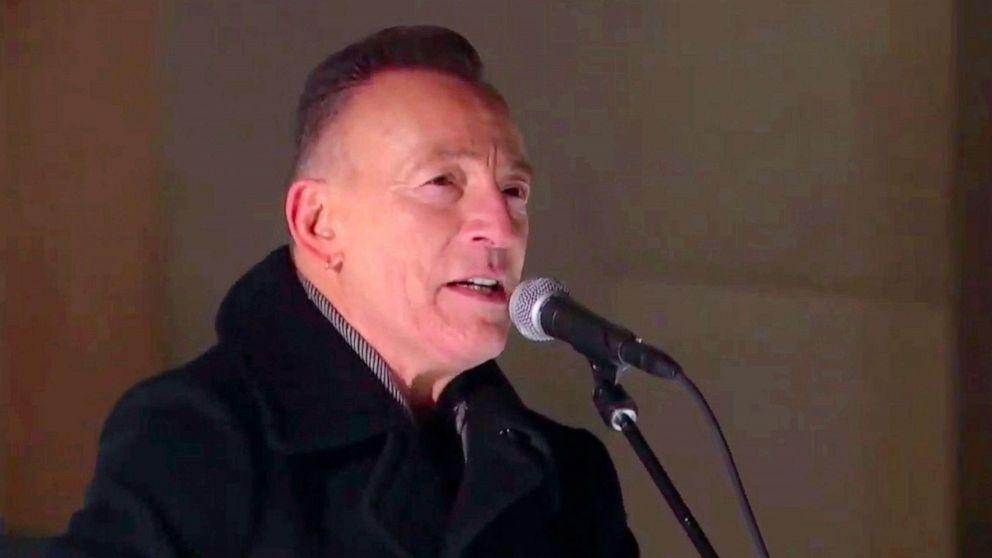 Biden Inaugural Committee via AP
In this image from video, Bruce Springsteen performs during the Celebrating America event, Jan. 20, 2021.

The Grammy award-winning artist opened the show and delivered a hopeful and inspiring performance of his hit song, "Land of Hope and Dreams." 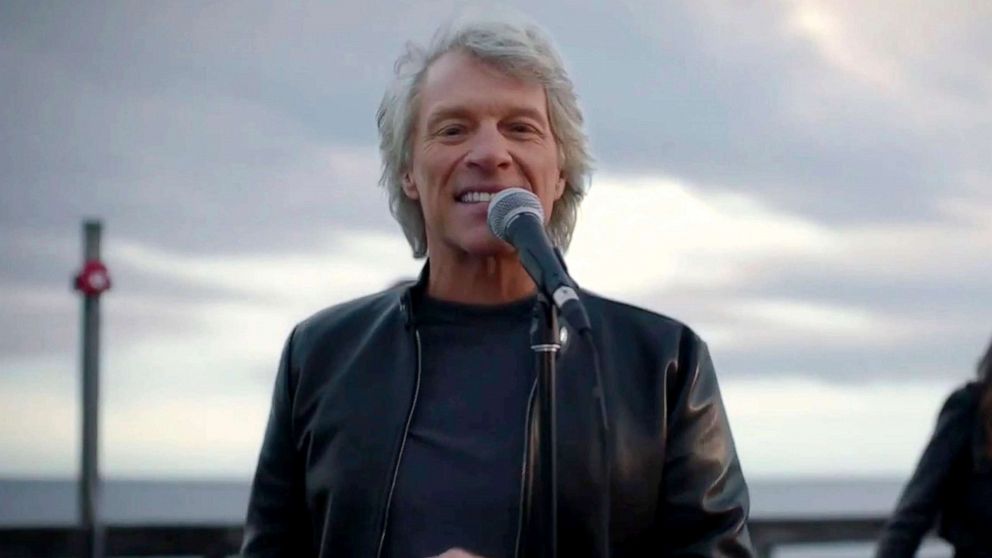 Jon Bon Jovi and his band performed their own rendition of The Beatles' "Here Comes the Sun" from Florida, on a boardwalk at dusk. 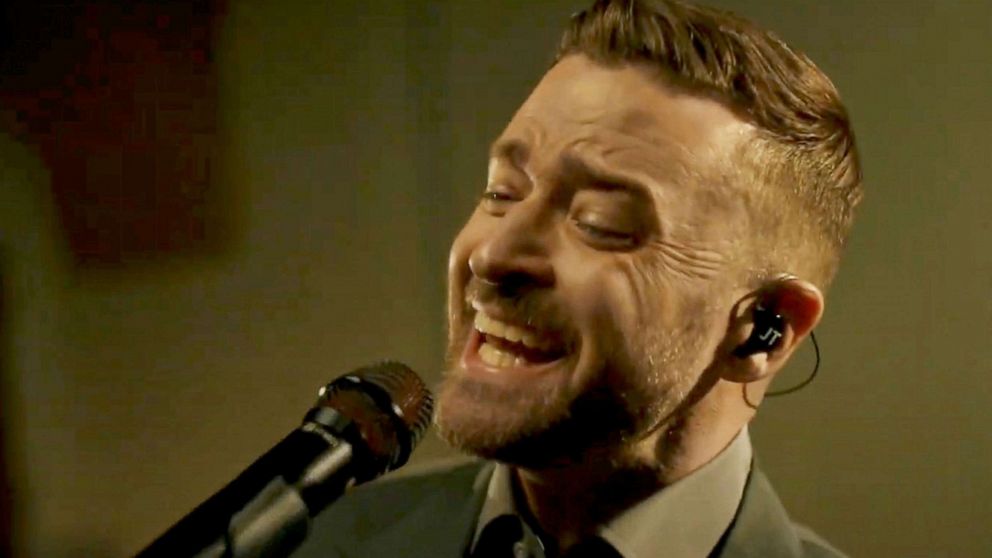 Biden Inaugural Committee via Reuters
Justin Timberlake performs at the "Celebrating America" event at the Lincoln Memorial in Washington, Jan. 20, 2021. 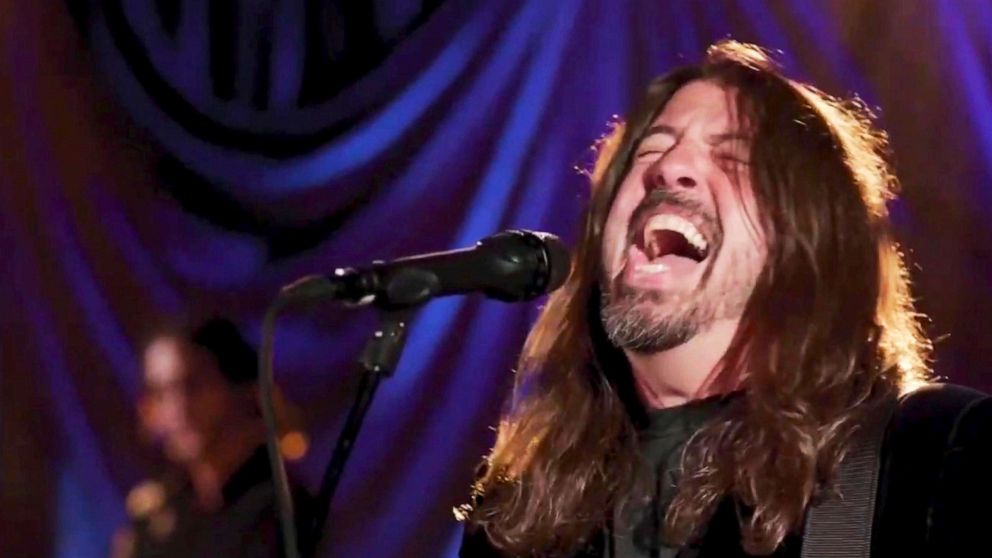 The band was introduced by Mackenzie Adams, a teacher from Seattle, who lead singer Dave Grohl said he identified with, as his mother was also a teacher. The group dedicated the performance of their song, "Times Like These," to all teachers across the country who have been teaching during the pandemic. 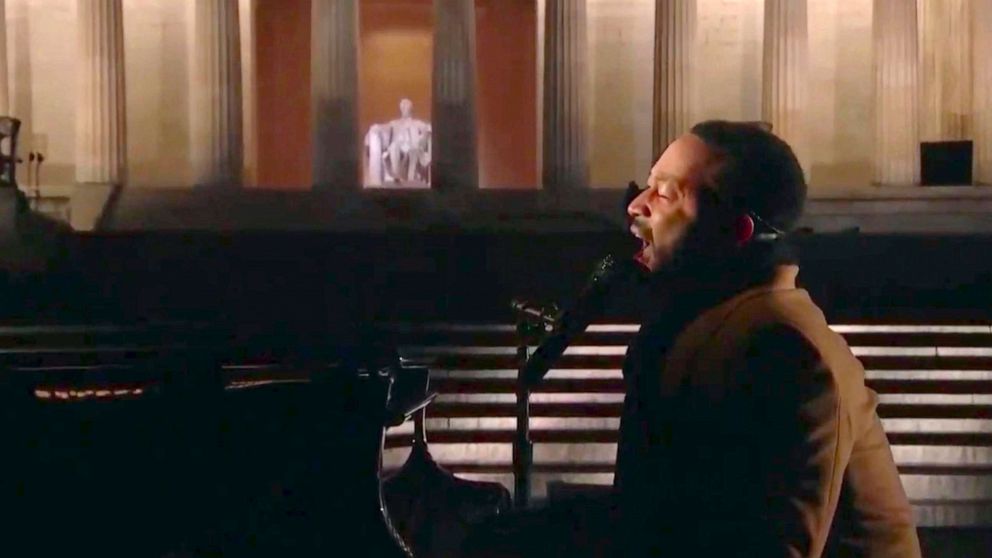 Biden Inaugural Committee via AP
John Legend performs during the "Celebrating America" at the Lincoln Memorial in Washington, Jan. 20, 2021.

Legend performed a moving performance of "Feelin' Good" by Nina Simone. The Emmy, Grammy, Oscar and Tony award-winning artist teased the song earlier in the day and alluded to the historic inaugural event in a tweet, "It's a new day."

Legend was joined in D.C. with his wife, model and cookbook author Chrissy Teigen, and their two kids.

.@TheTimMcGraw & @THubbmusic living our values and showing what America could look like if we were all a little more "Undivided". pic.twitter.com/iFGa3PMVah

The country singers performed their new song, "Undivided," which the duo wrote during quarantine. 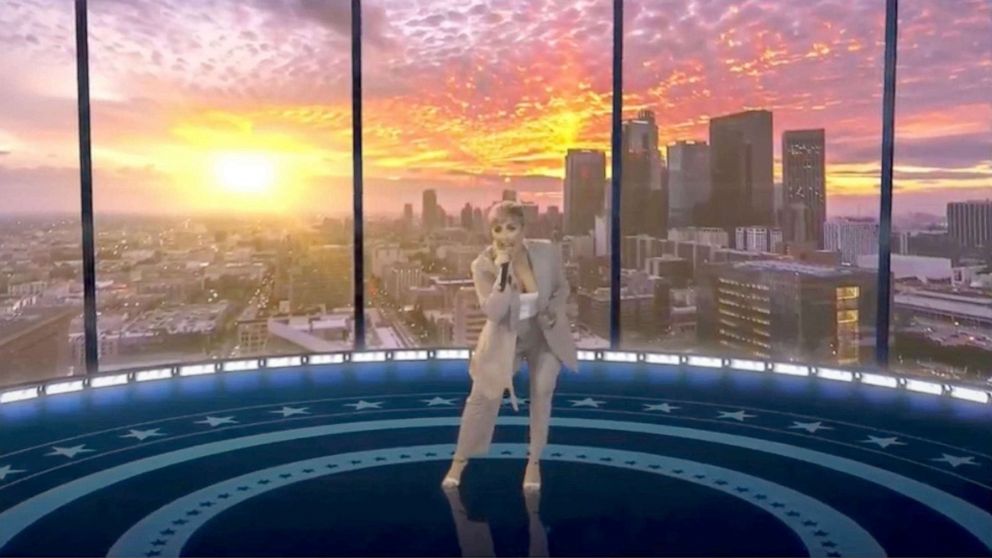 Donning a new pink hairdo, Lovato performed a fun version of Bill Withers' "Lovely Day." The "I Love Me" singer's performance included clips of health care workers, essential workers and more Americans across the country singing to the hit song.

In a sweet moment during Lovato's performance, President Joe Biden watched her performance from the White House with his wife, first lady Jill Biden, and his grandson. 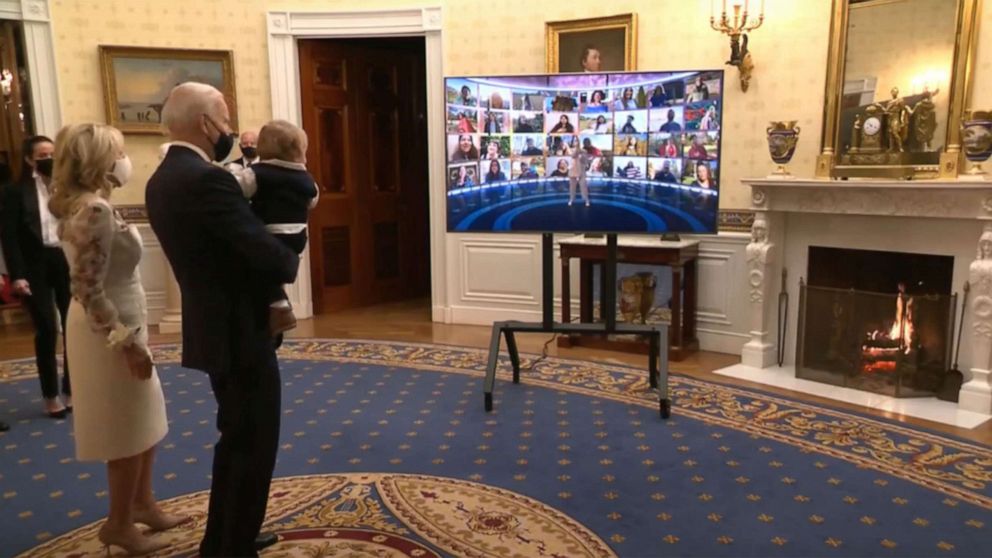 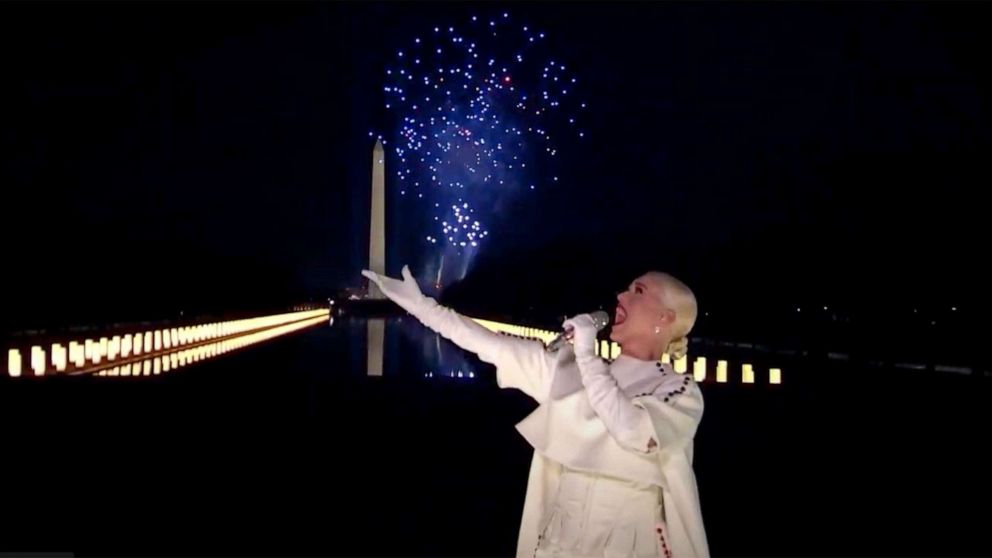 In true Katy Perry fashion, the pop singer ended the night with an epic performance of her hit song "Firework" with an extravagant fireworks display lighting up the National Mall in the background. 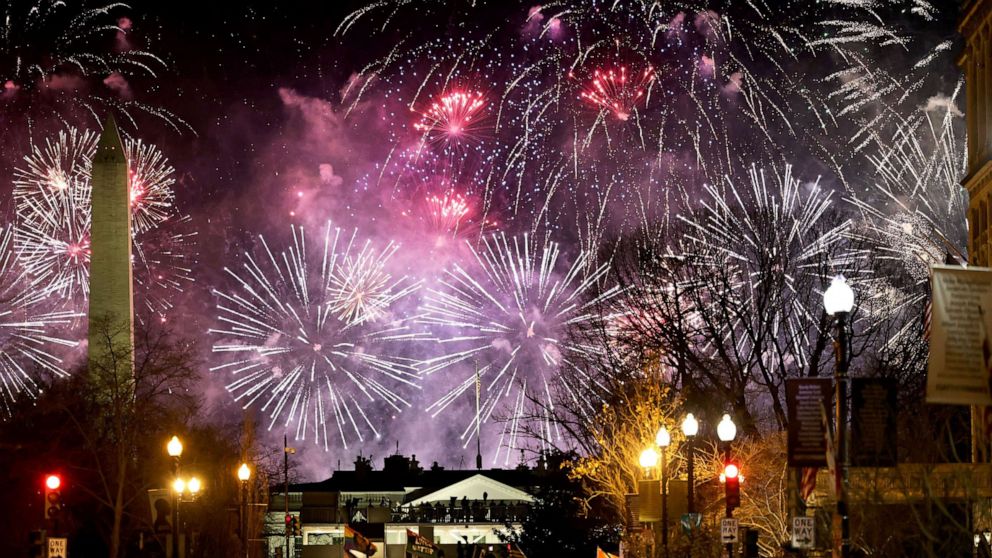 Michael M. Santiago/Getty Images
Fireworks go off over the National Mall during the inauguration of President Joe Biden on Jan. 20, 2021 in Washington.

Like Legend, Perry also teased an element of her performance earlier in the day in an Instagram post with several patriotic and festive mics. Can you guess which one she chose for her inaugural performance?