The former "Boy Meets World" and "Girl Meets World" star gave birth to her son, Adler, four weeks early on June 24, after learning that the baby had fluid in his lungs.

He remained in the neo-natal intensive care unit at Children's Hospital Los Angeles for three weeks, with Fishel and her husband, comedian Jensen Karp, spending as much time with him as possible.

"We feel [helpless] and powerless and useless," Fishel wrote on Instagram at the time. "We wanted so badly to follow our 'birth plan,' unsurprisingly none of which involved leaving our beautiful baby boy at the hospital for the first weeks of his life."

After being released from the hospital, Adler, who'd been drinking formula at his doctors' behest, was able to begin drinking breast milk again in August, until an X-ray the next month revealed he had fluid in his lungs again. The entire experience made Fishel empathize other mothers who'd told her about "mom guilt."

Nothing in the world could have prepared me for the reality that being a mom would also mean never feeling like I’m good enough.

Fishel opened up about those experiences, and others, in a personal essay for "Good Morning America."

As a childless woman looking at all mothers I knew, I could only see how incredible they were. Their kids were happy, well-loved, fed and clothed. Some of them went back to work and others didn’t. Those decisions were not made selfishly, but based on privilege and what was best for their children and their families.

What was there to feel guilty about? Naively, and perhaps arrogantly, I thought, "I'll never let myself have mom guilt."

Then I had a baby. 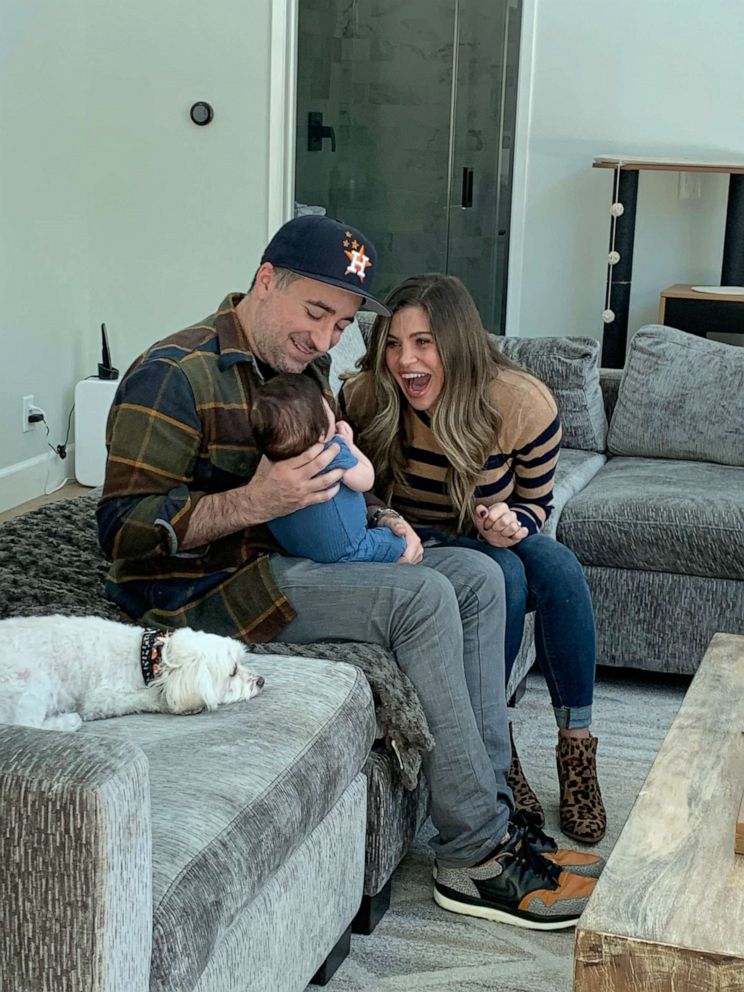 My "birth plan" included having a natural childbirth, free from any drugs, because I read it was better for the baby and ultimately better for mom, as well.

Because I went into labor more than four weeks early and my doctor discovered fluid in Adler’s chest cavity, I was immediately put on sodium magnesium to stop my contractions and give his lungs time to fully develop.

Seventy-two hours later, due to a significant decrease in amniotic fluid, I was induced with Pitocin. My drug-free birth was out the window.

The guilty thoughts came flooding into my head: "Why did my water break so early? Was it because I was on my feet working 12-plus hour days at almost 36 weeks? Was it all the spicy food I had been craving? Did I do something that will hurt my baby?"

Immediately after delivery, Adler was given a feeding tube so we weren’t able to breastfeed the way I always envisioned, but we were able to feed him breast milk through the tube.

Unfortunately, after 10 days, the fatty nature of breast milk caused a major increase in the amount of fluid in his lungs and we were rushed by ambulance to Children’s Hospital, where he was taken off breast milk and put on a medium chain triglyceride formula.

The guilt arrived with gusto. "Why is my milk hurting my child? Is my baby allergic to me? Formula is bad for him because it’s full of high fructose corn syrup. This is all my fault."

Of all the experiences we’ve had with Adler’s health, for some reason, not being able to feed him from my body has been one of the most emotional for me. The doctors assured me Adler would most likely grow out of this someday and I should keep pumping and eventually, hopefully, he’d be able to reap the benefits of breast milk.

When he was a little over 6 weeks old, we were given the green light from our doctor to try breast milk again. Adler latched easily, which felt like a miracle for a baby who had never been breastfed, and we were off and running.

Then, during a follow-up X-ray four weeks later, we discovered the fluid had come back and we immediately halted all breast milk and he had to go back on the MCT formula.

I was, quite honestly, an emotional wreck.

The formula made him gassy, fussy and seriously uncomfortable.

"Did we make the decision to try breast milk too soon? Is there something I could have done to prevent this? How did I miss the symptoms of fluid in his lungs? Has he been struggling to breathe?"

At the end of September, I went back to directing "Sydney to the Max" for the Disney Channel. In addition to Jensen, I had a dear friend babysitting, a part-time nanny we adore, and both my mom and my mother-in-law all chipping in on different days to help with Adler.

My first day back was hard. I came home after being away for 12 hours and Adler was asleep for the night. He hadn’t seen my face since 7 a.m. that morning and now he wouldn’t see it again until he woke me up for a middle-of-the-night feeding. As I cried over his sweet sleeping face, the guilt came back with a vengeance. "Does he remember me? Does he think I abandoned him? Am I hurting my son by desiring a career outside the home? Am I selfish?"

For as long as I can remember, I’ve dreamed of being a mom. I looked forward to sleepless nights, poopy diapers and being so enamored with my baby that I lost hours of my life just staring at him while he slept. However, nothing in the world could have prepared me for the reality that being a mom would also mean never feeling like I’m good enough.

None of us escape mom-guilt. It’s there whether you’re a stay-at-home mom or work outside the house, but one there is one thing I know for certain each and every mother has in common: We are trying our absolute best 100% of the time.

When you see a mom feeding her baby formula, or breast milk in a bottle, or directly from her breast, or through a feeding tube (I have done all of these in Adler’s 15 weeks of life), or you see a mom dragging a screaming toddler through Target, or you see a mom calling home from work, or you get a text from a stay-at-home mom who is ready to pull her hair out, know that there is a story there.

A unique story with details you will probably never be privy to, but you can rest assured that mother is often consumed with unnecessarily guilt.

So please, do me a favor.

The next time you see a mom with her baby or young child, look her in the eye and honestly tell her she’s doing an amazing job. Because you are, mama. I see you and you’re doing great.