Actor Brendan Fraser is opening up about what went into his transformation for the highly anticipated film, "The Whale."

In the upcoming A24 drama, Fraser plays Charlie, a reclusive English teacher living with severe obesity who attempts to reconnect with his estranged teenage daughter, Ellie (Sadie Sink).

Fraser said he took part in "hyper-focused research" to "understand the lives that people live who are affected by obesity in the way Charlie is."

"Up until now, I don't think I've seen this character body depicted in films and cinema unless it was for some cheap one-note joke," the actor shared in an interview with "Good Morning America." "And this is not that." 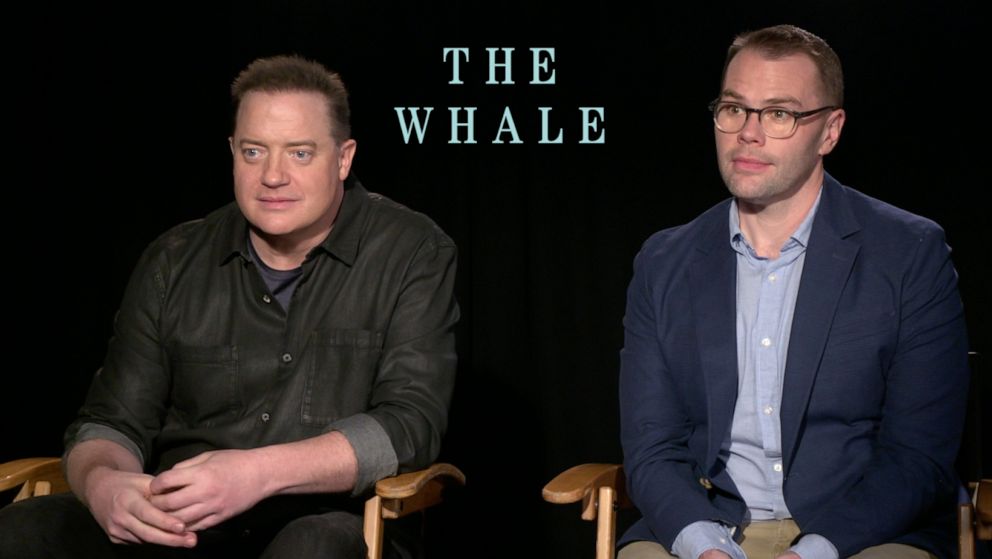 Fraser has already been receiving Oscar buzz for his performance in the Darren Aronofsky-directed film.

At the heart of the highly anticipated film, which is based on Samuel D. Hunter's 2012 play of the same name, is a story about fatherhood, and redemption and hard-won hope.

Playing Charlie went beyond the use of extensive prosthetics, and included discussions with the Obesity Action Coalition, Fraser said.

"I had many conversations with members of that association who gave me testimonials about their lives," Fraser explained. "Everything from what their eating habits were, their struggles with food as an addiction, with their hopes for improving their help with bariatric procedure -- or they were awaiting one in a sort of strange limbo that the health care system places them in."

"It was really moving," he added. "It made me just highlight and underline the necessity of telling the story with as much dignity as possible." 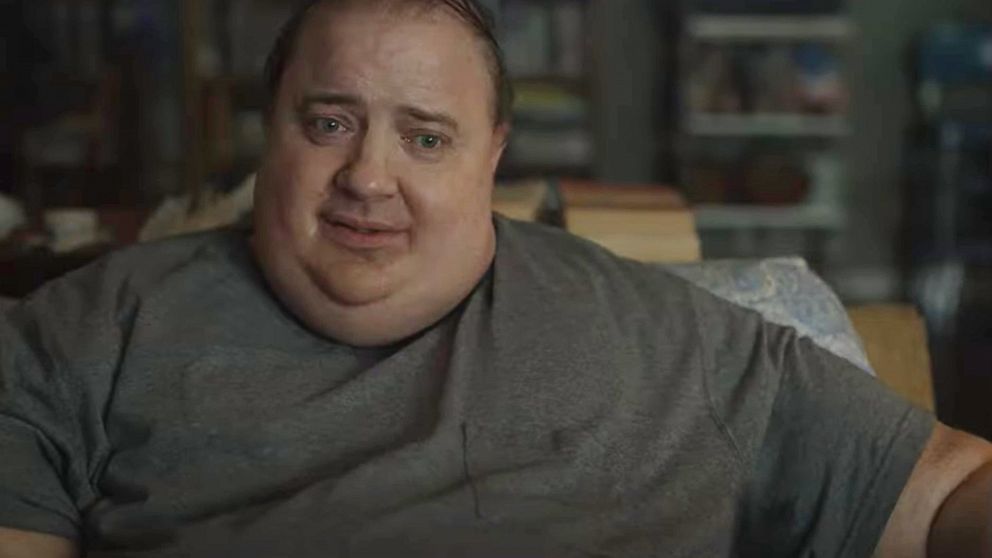 A24
A scene from the movie "The Whale."
MORE: Brendan Fraser says he 'will not participate' in 2023 Golden Globes if invited

The OAC said it provided Fraser with volunteers affected by obesity to provide insight about the realities of living with severe obesity.

"We shared the significant physical, emotional and social impacts of obesity and we see that insight reflected in many of Charlie's (Brendan Fraser) movements, actions and emotions throughout the film," the OAC told "GMA" in a statement. "Mr. Fraser has his own experience with weight bias and stigma, and we found him highly receptive to our feedback."

"He did a remarkable job of portraying many of the most challenging aspects of living in a large body and of showing several ways people react to being negatively judged for their size," it added.

The 100-pound suit that Fraser wore on set each day was designed by Oscar-nominated makeup artist Adrian Morot, who worked with Aronofsky to create Charlie's full size in a respectful way. Fraser said he sat for four hours each day in hair and make-up to transform into Charlie.

While filming, Fraser said wearing the suit was taxing and that he had a physical reaction similar to vertigo.

"It just stayed with me," he said. "It made me appreciate how strong you have to be, both physically and mentally, to inhabit a body such as Charlie, who is a man, who wears on his corporeal being the trauma that he has been through."

"The food that he eats and he presses that down -- he's the manifestation of his life's challenges," Fraser added. "He's not the person as he appears. He's so much more."

1:15
Brendan Fraser opened up about playing a reclusive English teacher suffering from severe obesity who attempts to reconnect with his estranged daughter.

In October, during the film's U.K. premiere at the British Film Institute London Film Festival, Fraser spoke to Newsweek about the use of the suit to portray Charlie after it faced criticism.

He told the outlet, "I'm not a small man. And I don't know what the metric is to qualify to play the role. I only know that I had to give as honest a performance as I can."

The OAC recognizes that prosthetics can be controversial, especially when portraying those who are affected by obesity, but the organization said it was used in a way that helped tell a story about someone living with the disease.

"Had the prosthetics been used to demean or ridicule people with obesity -- like we have seen in so many other instances in film and TV -- OAC would not have participated," the organization told "GMA." "But the intent of all involved with 'The Whale' was to realistically portray one person's story with obesity, something rarely seen in media."

"We took part to help make sure that the filmmakers portrayed Charlie in a realistic, multi-dimensional way," the group added.

'It's about faith in other people'

Hunter, who also wrote the movie's screenplay, said the film took 10 years to make. He said he wants those who watch it to have their faith in others restored.

Throughout the film, audiences see Charlie's challenge of connecting with his daughter Ellie, whom he abandoned at a young age.

Now a teenager, Ellie has developed a tough exterior and lashes out at in anger at her estranged father throughout the film, even when he continues to tell her how amazing she is. 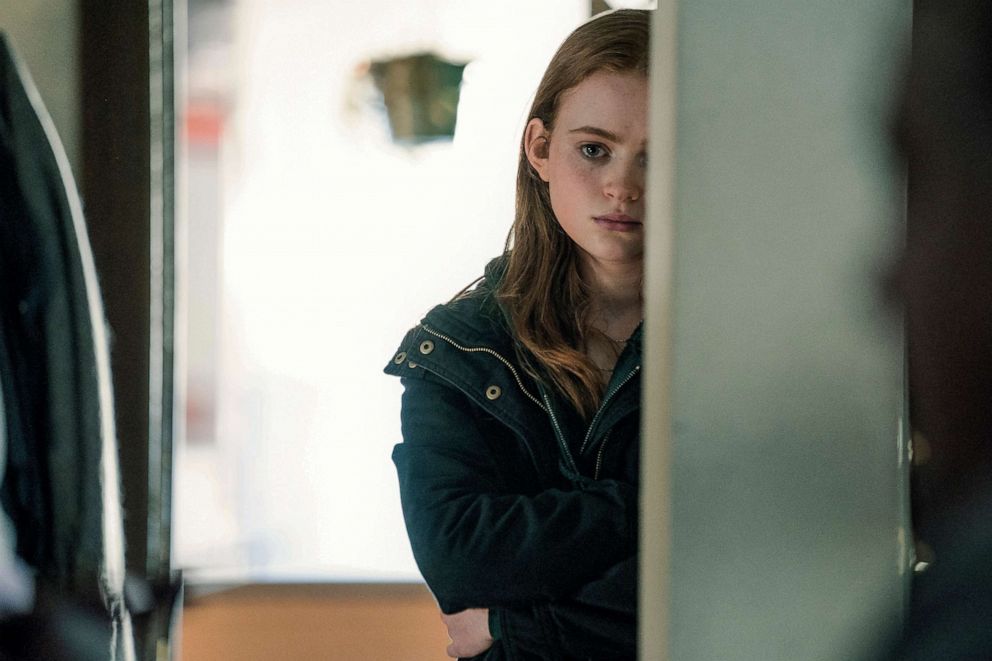 A24 via AP
This image released by A24 shows Sadie Sink in a scene from "The Whale."

A key line in the film that Fraser's character tells her is, "People are amazing." Hunter said he hopes that message sticks with those who watch the film.

"I think that this is fundamentally a story about hard-won hope," Hunter said. "I don't think that this delivers any platitudes, easy, feel-good messages. I think this is about faith in other people."

"I hope that's what people take away, is that in these cynical times, it's worth having faith in people," he added. "It's hard to have faith in people, but it's a worthy endeavor."

For actress Hong Chau, who plays Charlie's friend Liz in the movie, the relationship between Charlie and Ellie was something that intrigued her, especially as a new mom. 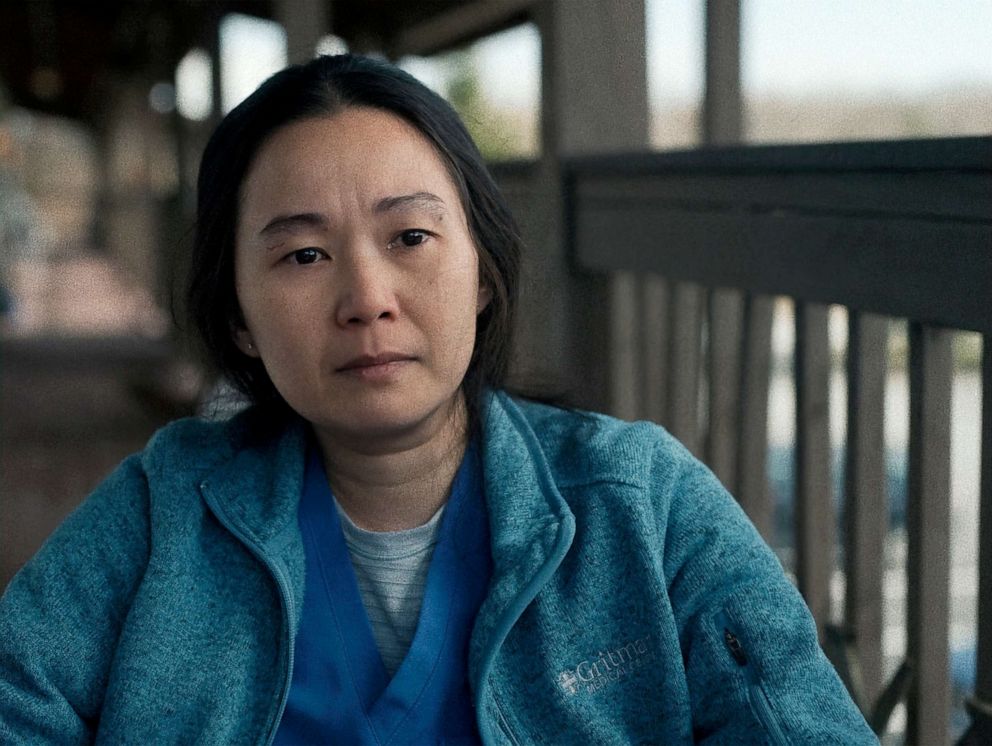 A24 via AP
This image released by A24 shows Hong Chau in a scene from "The Whale."

She said that "after I saw the movie for the first time, I was like shouting different lines to my daughter like, 'You're amazing!' "

"She had no idea what I was talking about, but I hope she gets to see the film one day," Chau added. "It's such a testament to the love of a parent for a child."

"The Whale" hits theaters in New York and Los Angeles on Dec. 9, and opens nationwide on Dec. 21.