Wedding bells are ringing for Britney Spears, who announced Sunday that Sam Asghari, her boyfriend of nearly five years, proposed.

The "Toxic" singer shared a video Sunday of her waving around her massive diamond sparkler, captioning it, "I can't f****** believe it!!!!!!" She also spammed six diamond ring emojis and a heart exclamation point emoji in the description.

The video, which shows Spears rocking some new cherry-red highlights, also includes an adorable exchange between the lovers when Asghari asks his future bride, "Do you like it?"

Spears, 39, gushes back through a wide grin, "Yes," and enthusiastically clasps her hands together.

Asghari, 27, also celebrated his engagement on Sunday and shared a cheeky photo of Britney's gorgeous ring blocking the view of their kiss.

In a statement to ABC News, Asghari's talent agent, Brandon Cohen of BACtalent, reacted to the fitness instructor's upcoming nuptials, saying he is "proud to celebrate and confirm the engagement."

"The couple made their long-standing relationship official today and are deeply touched by the support, dedication and love expressed to them," added Cohen.

The agent added that Spears' 4-carat sparkler was made by master jeweler Roman Malayev, founder of Forever Diamonds NY. 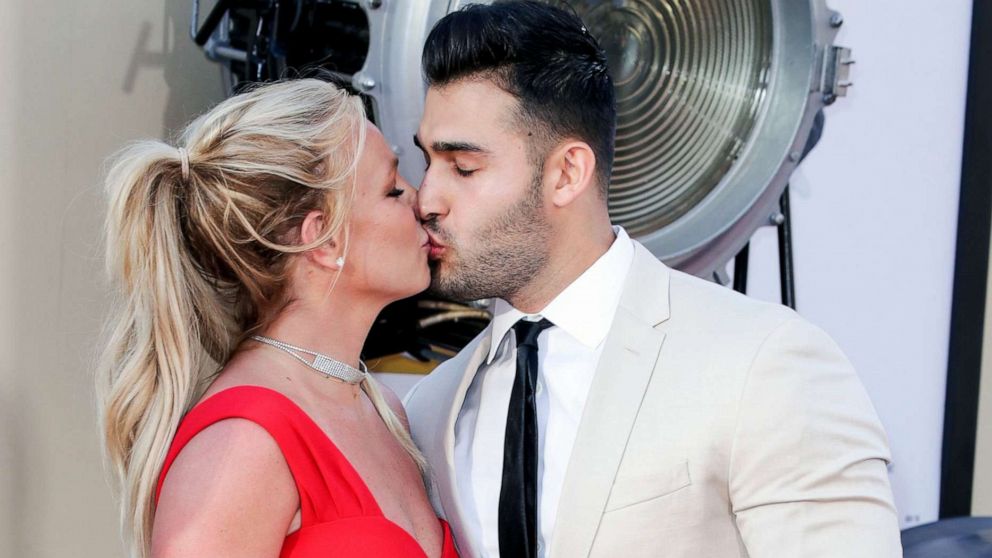 Matt Baron/REX via Shutterstock
Britney Spears and Sam Asghari at the "Once Upon a Time in Hollywood" film premiere at the TCL Chinese Theatre, Los Angeles, July 22, 2019.

In a statement to ABC News, Malayev said, "We couldn't feel more honored to create this ring for such a special couple. Their journey together has touched people around the world and we're so excited to be a part of their forever."

Malayev said Spears' ring is engraved with the word "lioness," which is a nickname Asghari affectionately calls Spears. The jeweler has since named the ring's setting, "The Britney" to honor the couple's story.

Spears and Asghari first met on the set of her 2016 music video for "Slumber Party." This will be the third marriage for the pop star, who shares sons Sean Preston and Jayden James, both 15, with her ex, Kevin Federline. She was also previously engaged to agent Jason Trawick, but they announced in 2013 that they'd split.