If all of Miley Cyrus' recent throwback posts about "Hannah Montana" have you nostalgic for the classic Disney Channel series, we've got good news for you.

A slew of "Hannah Montana" memorabilia is going on the auction block May 18, both online and live at the Hard Rock Cafe in New York City.

The collection of props, costumes, tour items and more that were featured on the 2006-2008 seasons of the show is owned by Jason Gluck, who was in charge of the MileyWorld fan club while the show was on the air.

Among the items going on sale: outfits and props from Miley's debut concert tour Best of Both Worlds, costumes used on the show, an autographed boot, personal handwritten notes, jewelry, backstage passes, T-shirts and more.

Best of all, the prices at this auction are relatively affordable as compared to other music memorabilia sales.

One of the priciest items is a pair of customized, tour-worn black high top Converses, decorated with iridescent glass that's been hand-painted to depict a set of earphones and the name "Miley" in graffiti-style lettering. It's expected to fetch between $2,000 and $4,000.

The most expensive item right now is an entire tour ensemble, including a customized black satin jacket that's monogrammed "Miley," a pink tank top and striped knee socks. That's estimated to sell for $3,000 to $5,000. 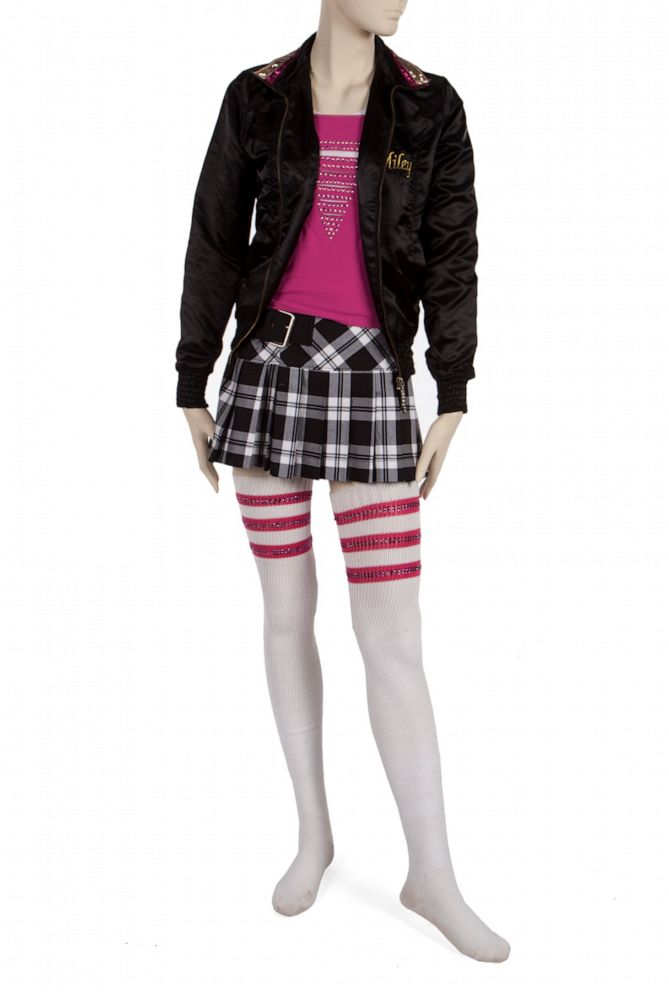 Courtesy Julien's Auctions
A customized black satin jacket with bands of sequins to the collar, monogrammed "Miley" to the front with a felt "M."

The memorabilia is going on display at the Hard Rock Cafe in Times Square from May 13 to May 17 and is free to the public.

The auction begins at 9 a.m. ET. Visit Julien's Auctions.com to find out how to bid.