As always, the CMA Awards telecast, which aired live from Nashville Wednesday night on ABC, was packed with musical performances. This year there was a special emphasis on music by female stars, who appeared in a number of special segments highlighting the great women of country music.

Here's who performed what:

Co-hosts Carrie Underwood, Reba McEntire and Dolly Parton started things off by harmonizing on "Those Memories of You," from the 1987 "Trio" album Parton made with Linda Ronstadt and Emmylou Harris.

Jennifer Nettles, Little Big Town's Karen Fairchild and Kimberly Schlapman teamed up to sing Loretta Lynn's "You're Looking at Country" while Maren Morris and her band The Highwoman sang Lynn's "Your Good Girl's Gonna Go Bad" -- while Lynn herself watched from the audience.

Then came a parade of great country women, all singing snippets of their signature hits: Tanya Tucker with "Delta Dawn," Gretchen Wilson with "Redneck Woman," Crystal Gayle with "Don't It Make My Brown Eyes Blue," Terri Clark with "Better Things to Do," Sara Evans with "Born to Fly" and, finally, Martina McBride and everyone else with "Independence Day." 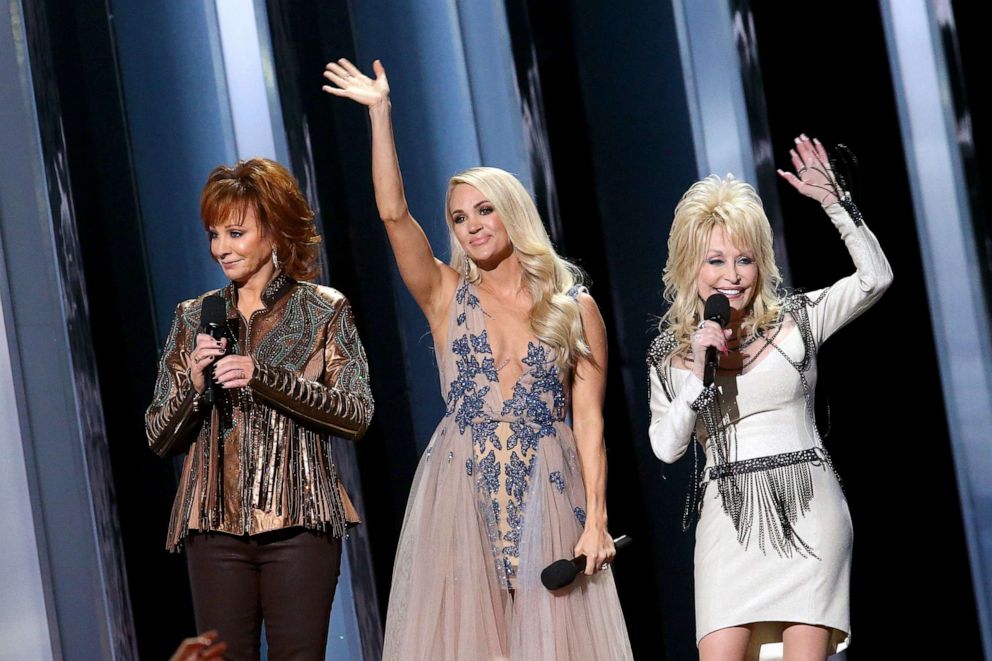 Dan & Shay sang their nominated hit "Speechless" and gave a flawless performance backed only by a string section and a piano.

Miranda Lambert sang "It All Comes Out in the Wash" in front of a makeshift car wash, complete with rotating brushes and soap bubbles flying through the air.

Pop star Pink and Chris Stapleton teamed up for "Love Me Anyway," a duet from Pink's album "Hurts 2B Human."

One Dominion sang "One Man Band" while standing in front of what looked like an empty theater.

Carrie Underwood belted out a jazzy, sexy "Drinking Alone" on a set that looked like a smoky jazz bar. She wore a black fedora and a black suit jacket, which she then removed to reveal a sexy, sleeveless cutout bodysuit.

Kelsea Ballerini performed a stunning acoustic version of "homecoming queen?" by herself on a small stage. Then Lindsay Ell joined her, and they began to sing Little Big Town's "Girl Crush." Over on the main stage, the song was continued by Runaway June, Maddie & Tae, Ashley McBride and Carly Pearce, before Little Big Town themselves appeared to help finish the song. "You're looking at the future of country music right here," said Karen Fairchild.

Lady Antebellum stripped it way down and sat on chairs to sing their latest hit "What If I Never Get Over You," joined by pop star Halsey. They then performed Halsey's current hit "Graveyard," and at the end, they wove the two songs together, which actually worked very well.

Brooks & Dunn and Brothers Osborne teamed up for a high-energy, guitar-heavy version of "Hard Workin' Man," but they went a bit too over the top with the flashing lights, which kept draining all the color out of the performers.

Maren Morris started her performance of "Girl" singing to herself in the mirror, before turning and completing the song on a stage strewn with bouquets of flowers. At the end, when she sang, "Everyone's gonna be OK, baby," she pointedly rested her hand on her pregnant belly.

Blake Shelton sang "God's Country" on a set that looked like an Oklahoma oil field that had caught on fire.

Dolly Parton teamed up with the group for KING & COUNTRY to sing their collaboration "Gold Only Knows," and then with Christian rock artist Zach Williams to sing their collab, "There Was Jesus." She finished things off with a choir-backed performance of "Faith," her current single with Galantis and Mr. Probz.

Kacey Musgraves teamed with Willie Nelson to sing "Rainbow Connection," made famous by Kermit the Frog in 1979's The Muppet Movie.

And Garth Brooks and Blake Shelton gave their duet "Dive Bar" its TV premiere on a set that looked like an actual rowdy dive bar.