The 53rd Annual CMA Awards, airing live from Nashville Wednesday night on ABC, were supposed to be all about celebrating the great female voices of country music. And while those voices were front and center on the telecast -- and a few even made it to the podium -- ultimately, the evening's biggest award went to a guy who'd previously won it six times before.

While many fans and fellow artists were rooting for CMA host Carrie Underwood to take home the Entertainer of the Year Award -- which hasn't been won by a woman since 2011 -- it was another Oklahoma superstar, Garth Brooks, who grabbed the big prize.

In his acceptance speech, the stadium-filling singer was gracious as always, singling out co-host Reba McEntire for special praise, raving about Kelsea Ballerini's performance, predicting double-winner Luke Combs would take home the Entertainer trophy some day soon, and declaring his love for his wife Trisha Yearwood.

As for the female winners, Ashley McBryde triumphed in the New Artist of the Year category -- not bad for a girl going nowhere -- while Maren Morris won the prestigious Album of the Year trophy for her critically acclaimed sophomore release, "Girl." 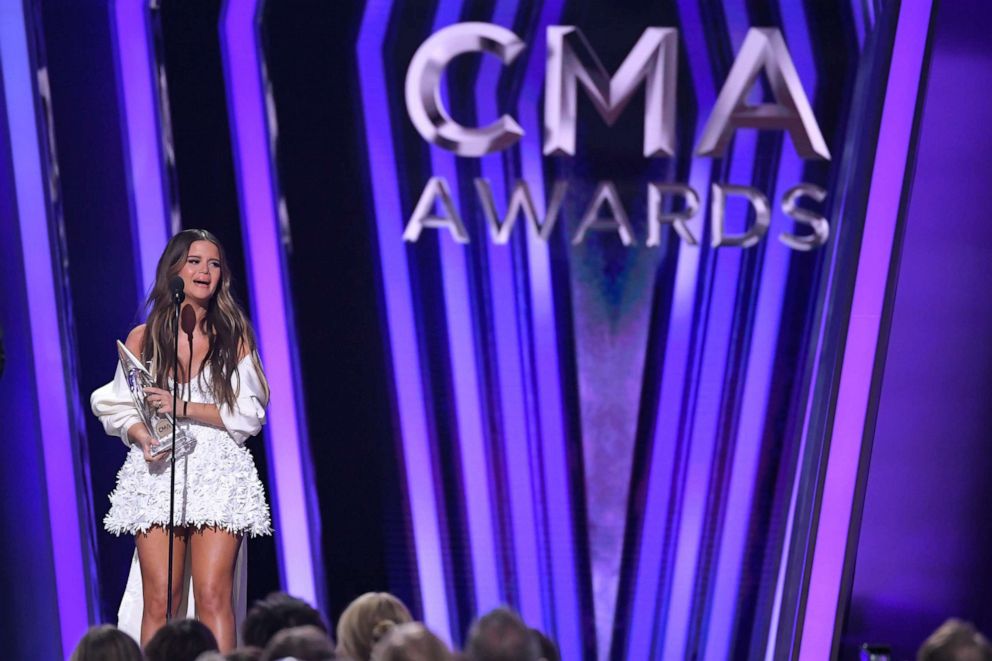 Mark J. Terrill/AP
Maren Morris accepts the award for album of the year for "Girl" at the 53rd annual CMA Awards at Bridgestone Arena, Wednesday, Nov. 13, 2019, in Nashville, Tenn.

A tearful Maren, who's 4 1/2 months pregnant with her first child, used her speech to pay tribute to hitmaking producer busbee, who died of brain cancer in September.

"We miss him so dearly," said Maren, who thanked busbee's widow for "sharing your husband with us."

Blake Shelton, who won Single of the Year for "God's Country," also paid tribute to busbee, as well as his own hero, singer Earl Thomas Conley, who died in April.

But it was Kacey Musgraves, who won her first Female Vocalist of the Year trophy, who addressed country's current lack of female representation directly ... if not specifically.

“I just want to say the female creative spirit, female energy, it's really needed right now. It's really important," the Grammy-winner said. "And I feel like it's something that Earth needs. And so whether it's me that's up here or any of the other women in this category, it's a beautiful thing.”

As promised, women were a huge part of Country's Biggest Night, starting with co-hosts Carrie Underwood, Reba McEntire and Dolly Parton, who kicked off the proceedings with a performance of "Those Memories of You," from the 1987 "Trio" album Dolly made with two more female icons: Linda Ronstadt and Emmylou Harris.

Then it was an absolute delight to see a string of female stars perform a medley of landmark hits by women, as Jennifer Nettles, Little Big Town's Kimberly Schlapman and Karen Fairchild sang Loretta Lynn's "You're Lookin' at Country," and The Highwomen sang "Your Good Girl's Gonna Go Bad," while Lynn herself watched from the front row.

Then Tanya Tucker, Gretchen Wilson, Crystal Gayle, Terri Clark and Sara Evans performed snippets of their signature songs, and Martina McBride closed it out with a rousing rendition of "Independence Day."

(MORE: Kacey Musgraves performs 'Rainbow Connection' with one of her heroes at CMAs)

We also got to see Pam Tillis, Janie Fricke, Deana Carter and Kathy Mattea as presenters during the night.

Co-hosts Carrie Underwood, Reba McEntire and Dolly Parton kept the flag flying for females in country throughout the night.

And McEntire -- who stopped the show by tearing off not one but two different dresses during her performance of "Fancy" -- said it best: "We're doing it for all the little girls watching tonight, dreaming of ruling the world of country music -- or maybe just ruling the world.”