Country music icon Loretta Lynn, best known for songs such as "Coal Miner's Daughter" and "You Ain't Woman Enough (To Take My Man)," has died. She was 90 years old.

"Our precious mom, Loretta Lynn, passed away peacefully this morning, October 4th, in her sleep at home at her beloved ranch in Hurricane Mills," Lynn's family said in a statement.

Lynn released an unheard of 50 studio albums in her life, most recently "Still Woman Enough" in March 2021.

By the time "Coal Miner's Daughter" hit the big screen in 1980, even the most casual country music fan would've been intimately familiar with Lynn's life story, thanks to the 1970 No. 1 hit that paid tribute to her beginnings in rural poverty in Butcher Holler, Kentucky. When the film became a box office success, it catapulted her to the status of American music icon, and won Sissy Spacek an Academy Award for best actress.

The love of Lynn's life, Oliver "Doolittle" Lynn, married the teen Loretta Webb, soon taking her an entire continent away from her close-knit family to find work in Washington state. By the time Lynn was 20, she had four children and her singing around the house made her husband believe she could be a star. Doo bought his wife a guitar, she taught herself to play and soon she'd written the song that would be her first country hit. 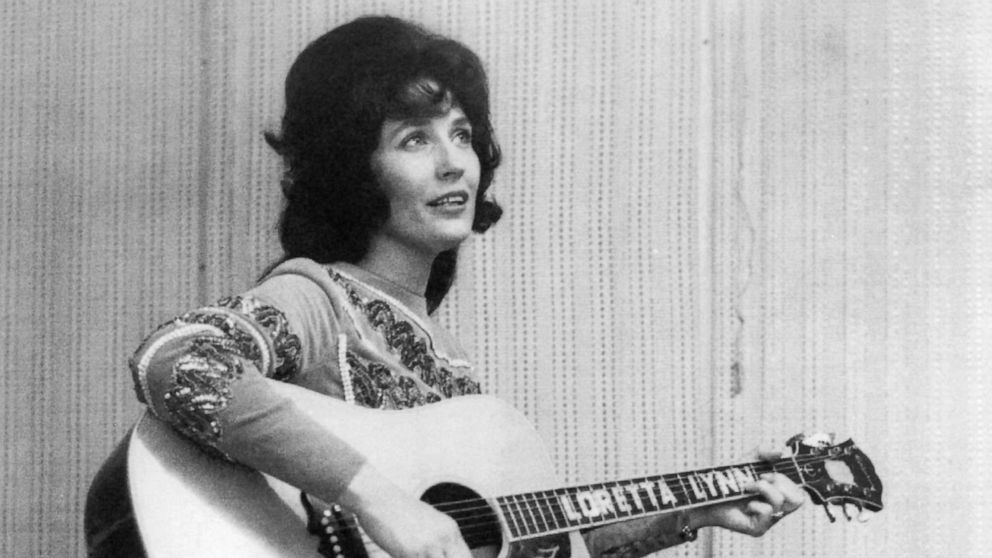 Lynn and her ambitious husband set out on a grassroots promotional campaign, visiting disc jockeys all across the country. By 1960, her debut single, "I'm a Honky Tonk Girl," was rising on the charts and she made her Grand Ole Opry debut.

The legendary Patsy Cline took Lynn under her wing, and her protégée was hit hard by her sudden death in a plane crash in 1963. Cline left such an impression on Lynn that she named one of her twins, born in 1964, after her.

As a vocalist, Lynn may have carried on the stylings of her idol Kitty Wells, but when it came to songwriting, the untrained musician struck out on a path all her own. Her husband's wandering eye gave life to classics like "You Ain't Woman Enough (To Take My Man)," "Fist City" and "Don't Come Home A-Drinkin' (With Lovin' on Your Mind)," which would become her first No. 1 country hit in 1966.

Lynn never shied away from taboo topics, particularly ones that affected women. She tackled then-controversial issues like divorce and birth control in "Rated X" and "The Pill," and remained unscathed when they were banned by some radio stations.

Appropriately, the self-styled pioneer was the Country Music Association's first female vocalist of the year, in 1967, an award she would win again in 1972 and 1973. The early '70s would be an epic time for Lynn, as she accomplished a task that's still difficult today: In 1972, she became the first woman ever to be CMA entertainer of the year.

From there, her horizons only expanded. She teamed with Conway Twitty to redefine the country duet with pairings like "After the Fire Is Gone," "Lead Me On" and "Louisiana Woman, Mississippi Man." The two would be named CMA's top vocal duo every year from 1972 to 1975.

In 1976, she found time to write her autobiography, "Coal Miner's Daughter." The accompanying movie from 1980 became one of the year's top 10 highest-grossing films domestically and was nominated for a total of seven Academy Awards in 1981.

By the end of the '70s, Lynn was such a widely marketable commodity, Procter & Gamble chose her to be the spokesperson for its line of oil and shortening. "Crisco'll do you proud every time!" was her tagline in a series of memorable TV spots. 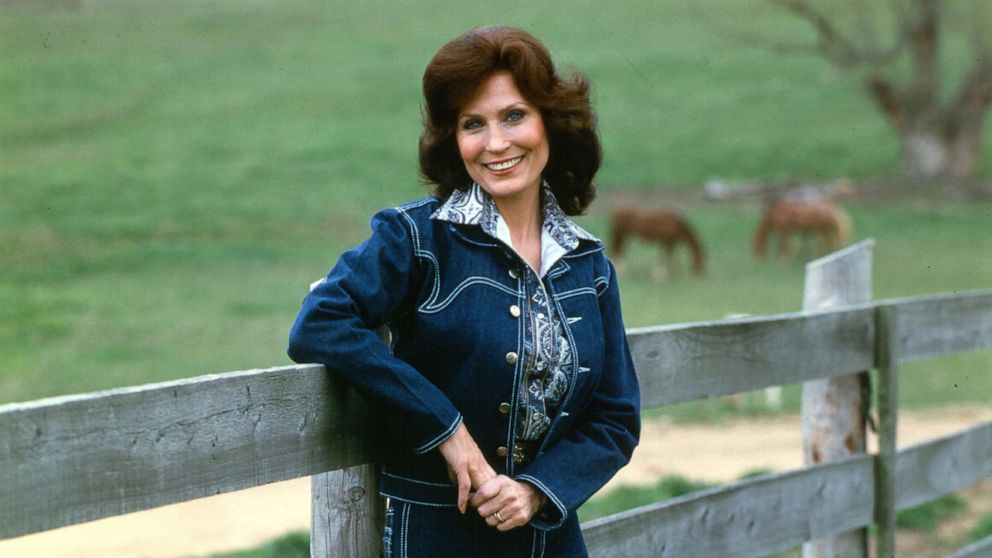 Throughout her life, Lynn remained fiercely devoted to her family, doing her best to help both her siblings and her children launch their own country careers. Her youngest sister, Brenda Gail Webb, was reborn Crystal Gayle after Lynn refashioned her name, taking inspiration from a Krystal fast food sign.

Lynn also set about writing her sister's first hit, "I've Cried (The Blue Right Out of My Eyes)." Gayle would succeed her sister in taking home the CMA female vocalist of the year trophy twice, in 1977 and 1978. Lynn's twin daughters, Patsy and Peggy, also achieved some success in the '90s, signing a contract with Warner Brothers as The Lynns.

Lynn's love for her family would also bring her heartbreak. In 1984, life dealt her a difficult blow when her oldest son, 34-year-old Jack Benny Lynn, drowned on her ranch in Hurricane Mills, Tennessee.

Just four years later, Lynn would achieve the highest honor in her field, induction into the Country Music Hall of Fame.

In the '90s, as her husband's health began to fail, Lynn focused on taking care of the man she'd fallen in love with as a teenager. She managed to finish the memorable "Honky Tonk Angels" album with Dolly Parton and Tammy Wynette in 1993, but suffered a serious heartbreak when Doo died in 1996. 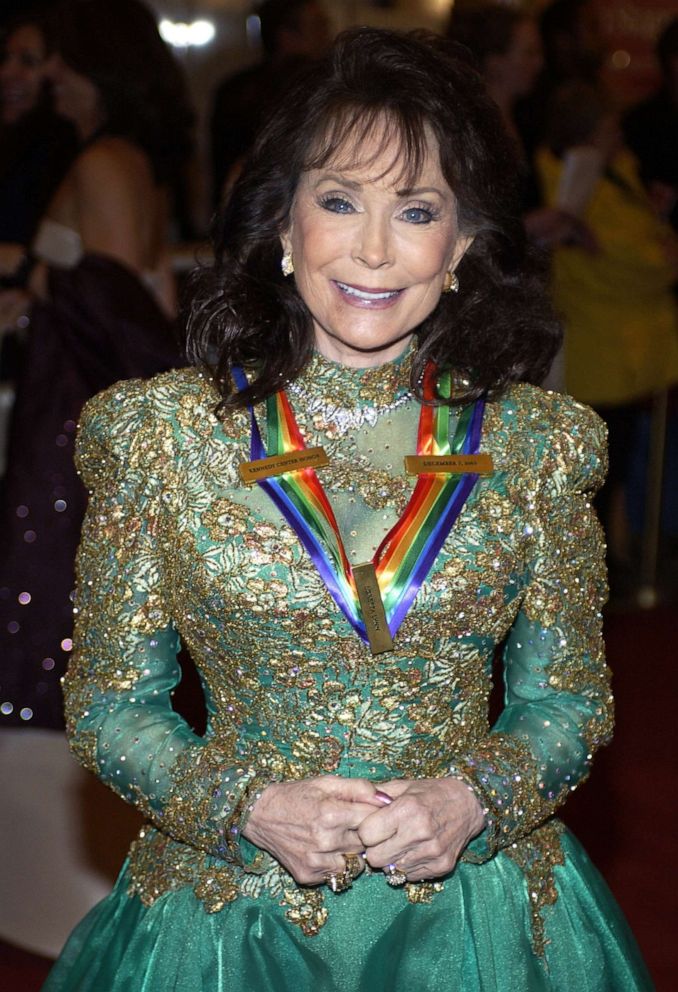 Though now a bona fide country legend, Lynn's career highlights were still far from over. In 2002, she released a second volume of her autobiography, this time titled "Still Woman Enough." In 2003, she received the Kennedy Center Honor, ahead of her 2004 Grammy-winning collaboration with rocker Jack White, the album "Van Lear Rose."

The woman who'd started her music career with only her wit, hard work and one-of-a-kind sense of humor was never one to give up, even in her 80s. She joked she'd taken care of John Carter Cash backstage at the Opry so his parents, June Carter and Johnny Cash, could perform. In her later years, she headed to Cash Cabin with the respected producer, recording in the same space where Johnny Cash had laid down his final vocals.

The album "Full Circle," released in 2016, was nominated for a Grammy while "White Christmas Blue" followed the same year. The 2017 release of Lynn's "Wouldn't It Be Great" album was delayed when she suffered a stroke but was eventually released a year later.