Elton John is wrapping up the North American leg of his Farewell Tour in a special way.

Tonight, the “Rocket Man” singer will take his final bow on his North American tour at Dodger Stadium, where he first performed at 47 years ago. And the entire concert will be livestreamed on Disney+.

"This is my last tour," John told "Good Morning America in an interview. "You have to soak it in. And I have soaked in all the love and all the loyalty that's been shown from the audience." 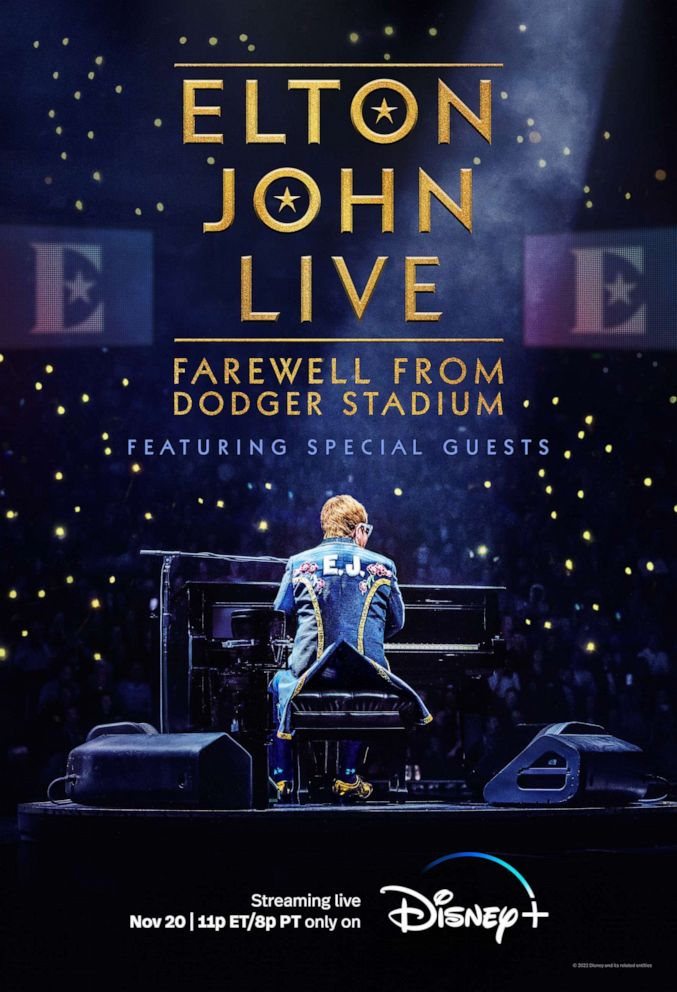 Disney+
“Elton John Live: Farewell from Dodger Stadium” will commemorate a watershed evening in music history as it unfolds in real-time at Dodger Stadium, giving fans 50,000+ fans in person and countless admirers worldwide, the rare chance to experience his biggest hits from the past 50 years. The extraordinary night also will feature several yet-to-be-announced big-name artists who will honor the legendary megastar on stage.
MORE: Watch Elton John sing 'Can You Feel the Love Tonight' to celebrate 25 years of 'The Lion King' on Broadway

On Oct. 25, 1975, John took the stage at Dodger Stadium, becoming the first act to perform there since The Beatles nine years prior. During that performance, the singer covered The Who’s “Pinball Wizard,” and many described the moment as launching John to stardom.

"I was the biggest I could posisbly be," he said. "To be there again on my own, and to finish off the North American tour, with three days at Dodgers Stadium -- I could not ask for a more wonderful ending."

The three-hour livestream, called “Elton John: Farewell from Dodger Stadium,” will showcase the singer and include moments from his 1975 performance. He will also take the stage with Brandi Carlile, Kiki Dee and Dua Lipa, who teamed up with John on the recent hit song, "Cold Heart (PNAU REMIX)," which hit no. 7 on Billboard's Hot 100 list.

In a statement from Disney+, “Farewell from Dodger Stadium” will serve as a “prelude” to a documentary about John, which will be released sometime next year by Disney. In the documentary, fans can expect to see “unseen rehearsal and concert footage over the last 50 years, along with exclusive personal archives and interviews.”

“Elton John: Farewell from Dodger Stadium” will be produced by Fulwell 73 Productions and Rocket Entertainment.