"Emily in Paris" season 2 ended with professional and romantic cliffhangers for the show's titular main character Emily, and fans will soon figure out what choices the American abroad has made when season 3 finally arrives.

When last we saw Emily, played by actress Lily Collins, she was at a crossroads.

Work-wise, she needed to choose between staying at Savoir with her Gilbert Group boss Madeline (Kate Walsh) and working her way up toward that promotion she's always wanted back in Chicago, or going with her former co-workers Sylvie (Philippine Leroy-Beaulieu), Julien (Samuel Arnold) and Luc (Bruno Gouery), with whom she has formed a bond, as they start their new advertising agency -- and remain in Paris.

In the love department, the choice isn't any easier: pursue a long-distance relationship with Alfie (Lucien Laviscount) as he returns to London or open up to Gabriel (Lucas Bravo) about her feelings for him -- just as he has reunited with his ex and Emily's friend, Camille (Camille Razat).

At least Emily still has best friend and roommate Mindy (Ashley Park) by her side. 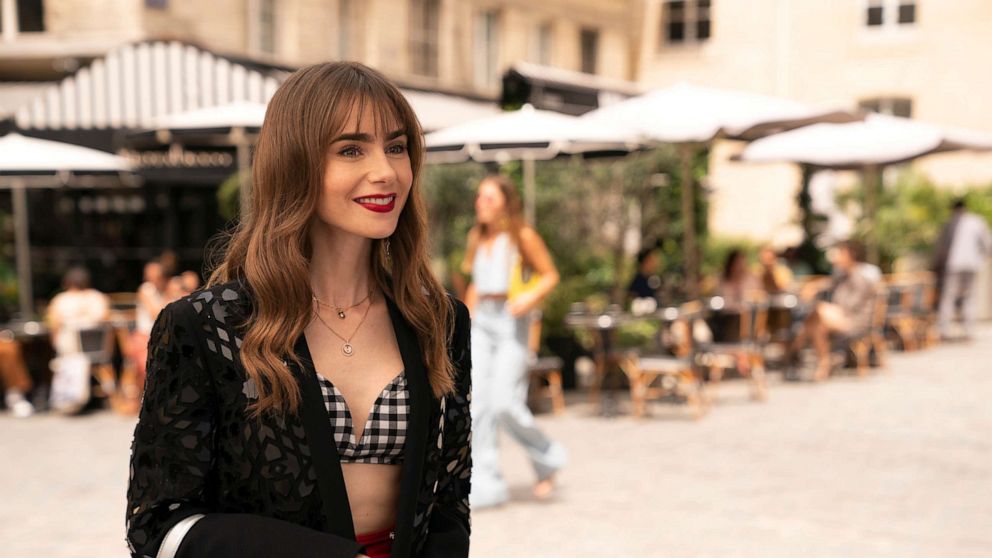 Stephanie Branchu/Netflix
Lily Collins as Emily Cooper in season 3 of "Emily in Paris."

Despite all of her character's deliberations, Collins told "Good Morning America" fans will see a more adjusted Emily in season 3.

"Emily's been here a little longer now, learning more about the culture and feeling more centered within the city," she said. "She's more settled in something that was once so unfamiliar, and she has her crew."

"I think it's funnier, more dramatic, more colorful, more inclusive, more adventurous," Collins continued. "Every season we get bigger, and it feels that way and it feels also really grounded."

Bravo, when asked for what Gabriel's love life is like in season 3, teased a "secret announcement" and "family."

As for Arnold, he said fans can look forward to "higher" stakes and more developments in the fashion department, saying the costumes are "next level" in season 3.

"Emily in Paris" season 3 will be streaming soon on Netflix.