Each year the Emmy Awards are conversation starters for television lovers, and the 2021 show was no different.

During the awards show's three-hour-plus runtime, there were plenty of memorable speeches, tributes to those we lost -- be they colleagues in the entertainment industry or family members -- and more to keep viewers glued to their screens.

In addition to kicking things off with a musical number and honoring the legendary Debbie Allen with the Governors Award, there were plenty of trophies handed out as well.

MORE: Emmys 2021: See the most memorable red carpet looks of the night

Scroll down to see some of the biggest moments from the 2021 Emmys.

A singalong to start the show 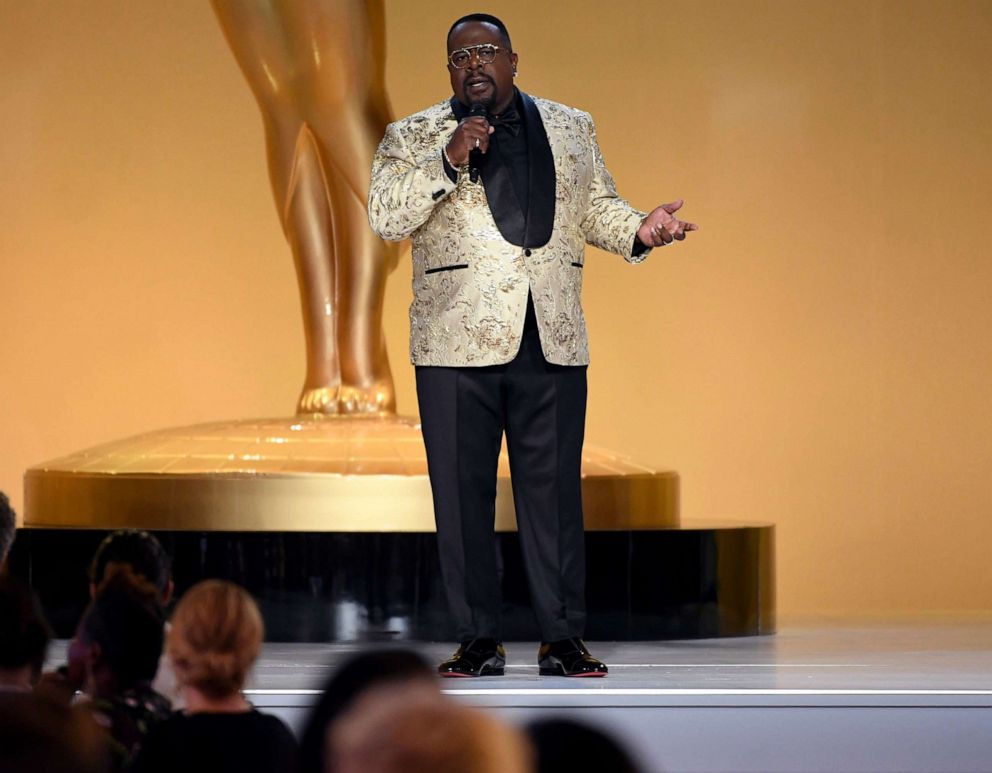 Phil McCarten/Invision for the Television Academy via USA TODAY
Cedric The Entertainer hosts during the 73rd Emmy Awards on Sept. 19, 2021, in Los Angeles.

Cedric the Entertainer kicked off the show with a tribute to Biz Markie, who died in July at 57, with a performance of the late rapper's hit 1989 song "Just a Friend."

The comedian was joined by LL Cool J, Lil Dicky and Rita Wilson, who performed the hip-hop classic with him, and got the audience out of their seats and on their feet to sing and dance along.

Instead of the traditional lyrics, Biz Markie's famous tune included lines like "TV, you’ve got what I need," as Cedric the Entertainer and crew sang about the love of television. 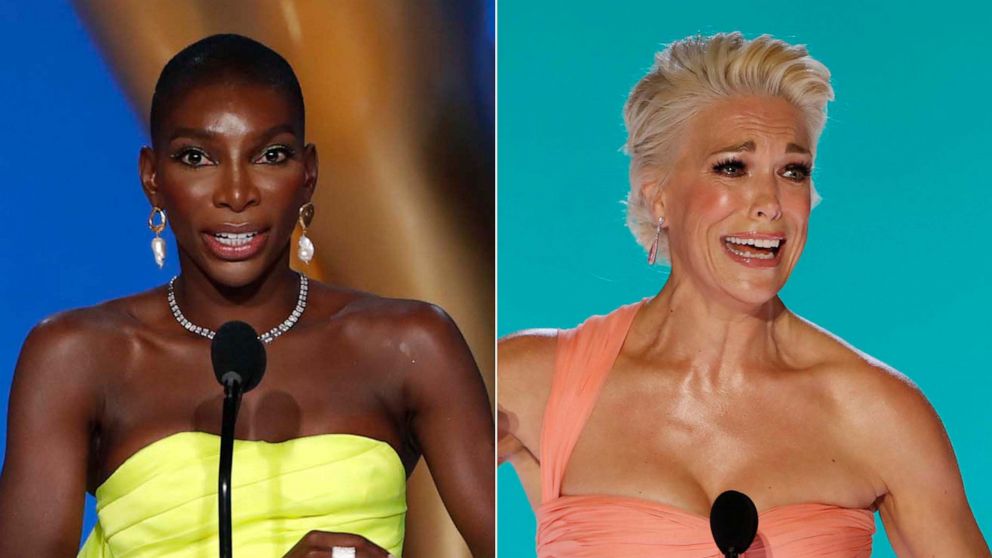 Cliff Lipson/CBS via Getty Images
Michaela Coel and Hanna Waddingham accepts their awards at the 73rd Emmy Awards on Sept. 19, 2021, in Los Angeles.

Hannah Waddingham won the Emmy for supporting actress in a comedy series and shouted out her fellow "Ted Lasso" stars Jason Sudeikis and Juno Temple, before thanking her parents for their support and saying she nearly lost them during the filming of the show's latest season.

"I am so glad that you are here to see this moment," she said.

Waddingham ended her speech by saying other West End performers, like herself, should be given more opportunities like the one she was given because they "won't let you down."

Jean Smart, who won the Emmy for lead actress in a comedy series, started her acceptance speech with a tribute to her late husband, Richard Gilliland, who recently died.

"Before I say anything else, I have to acknowledge my late husband who passed away six months yesterday," she began. "I would not be here without him and without his kind of putting his career on the backburner so that I could take advantage of all the wonderful opportunities that I have had."

Michaela Coel, while accepting the Emmy for writing for a limited or anthology series or movie, dedicated the story told on her show, "I May Destroy You," to "every single survivor of sexual assault." Coel's own experience inspired the show.

The Brit also shared "a little something" she wrote for her fellow writers encouraging them to be fearless in their storytelling.

"Write the tale that scares you, that makes you feel uncertain, that is uncomfortable. I dare you," she said. "In a world that entices us to browse through the lives of others to help us determine how we feel about ourselves, and see in turn still the need to be constantly visible, for visibility these days seems to show equate to success. Do not be afraid to disappear, from it, from us, for awhile and see what comes to you in the silence."

Debbie Allen is honored with the Governors Award

The endlessly talented Debbie Allen was presented with the 2021 Governors Award and, while giving a moving speech, told the Emmys producers to "turn that clock off" because she was "paying no attention to it." 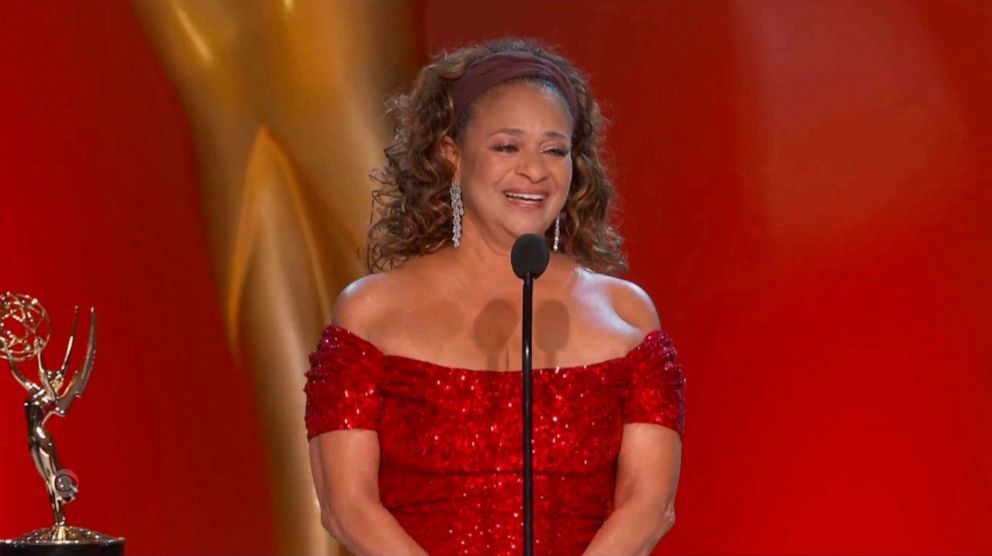 Before Allen took to the stage, a video recapping her life and career was played. When it ended, Jada Pinkett Smith, Ellen Pompeo, Ava DuVernay and Michael Douglas were shown, all holding canes in tribute to her iconic "Fame" character and tapping them on the stage while she came out to a standing ovation.

"I am trembling with gratitude and grace, I'm trying not to cry and be equal to the situation, because it's been many years in the making, taking a lot of courage to be the only woman in the room most of the time, a lot of courage and creativity and faith to believe that I could keep going. And I have," Allen, 71, said in her speech.

The "Grey's Anatomy" star continued, adding, "And I brought a whole lot of people with me, so I want to say thank you for this glorious moment in the sun."

Allen -- known for being a choreographer, director, producer and actress -- concluded her speech with a poignant and timely message to women and the younger generation.

"Let this moment resonate with women across the world, across this country and across the world, from Texas to Afghanistan," she said. "Let them know. And also with young people who have no vote and who can't even get a vaccine, they're inheriting the world that we live that we leave them. It is time for you to claim your power, claim your voice, say your song, tell your stories. It will make us a better place. Your turn."

As the hit VH1 show "RuPaul’s Drag Race" picked up the trophy for outstanding competition program, RuPaul notched his 11th win, making him the most honored Black artist in Emmy history.

Although Ru did not call out the historic moment, he thanked the Academy and said, "For you kids out there watching, you have a tribe that is waiting for you."

Remembering those we lost 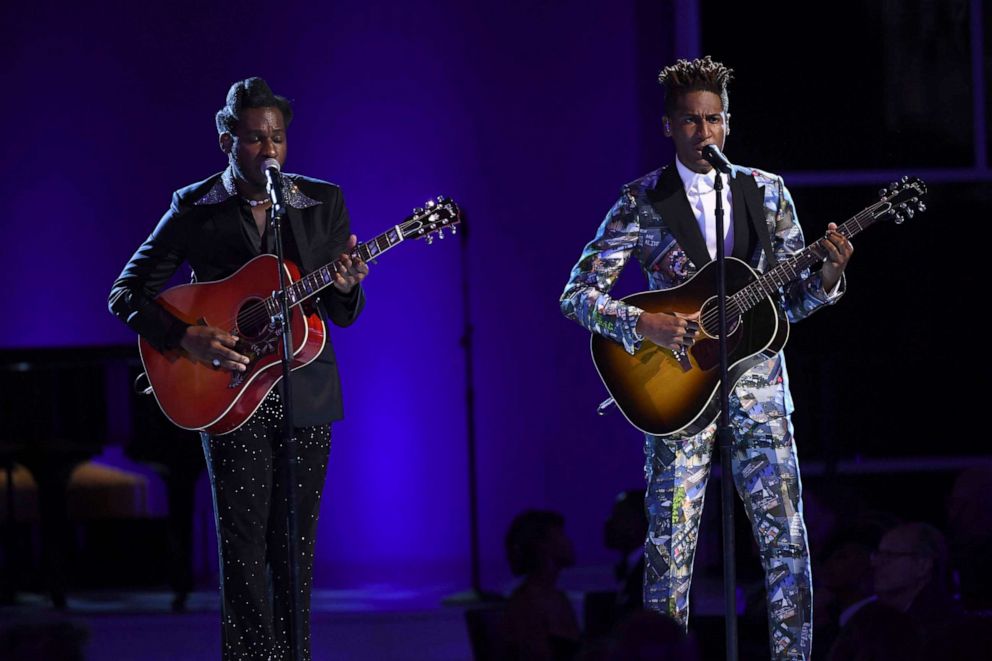 Phil McCarten/Invision for the Television Academy via AP
Leon Bridges, left, and Jon Batiste perform an in memoriam tribute at the 73rd Emmy Awards on Sept. 19, 2021, in Los Angeles.

The in memoriam segment began with "Orange Is the New Black" alum Uzo Aduba, who introduced a musical tribute by Leon Bridges and Jon Batiste performing an original song from Bridges titled "River."

Some of the stars we lost in the past year were also shown love throughout the show by presenters and those accepting their awards.

First up came Kerry Washington who, while presenting the Emmy for best supporting actor in a drama series, paid tribute to Williams, "The Wire" and "Lovecraft Country" star, who died unexpectedly earlier this month at the age of 54.

"Michael was -- crazy to say was -- a brilliantly talented actor and a generous human being who has left us far too soon," she said. "Your excellence, your artistry, will endure."

Williams, who was nominated in the category, did not win the Emmy, his fifth nomination from his incredible career.

"And lastly, 'Weekend Update' has been part of 'SNL' for 46 seasons," Michaels said. "And here I'd like to pay tribute to one of the best we ever had, Norm Macdonald." 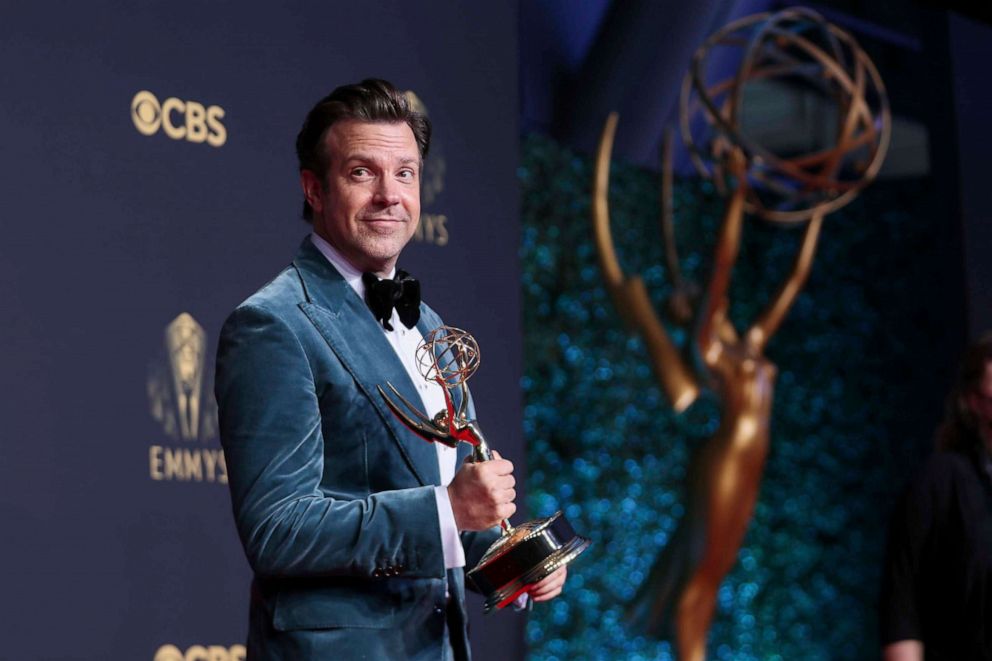 Danny Moloshok/Invision for the Television Academy via AP
Jason Sudeikis poses for a photo with the award for outstanding lead actor in a comedy series for "Ted Lasso" at the 73rd Emmy Awards on Sept. 19, 2021, in Los Angeles.

Last but not least, let's talk about the trophies themselves: the big winners.

When counting up the Emmys from this year -- including those from the Creative Arts Emmys and the televised awards show -- "The Queen's Gambit" and "The Crown" tied for the top honors at the Emmys this year, winning 11 trophies apiece.

Additionally, "Saturday Night Live" snagged eight while "Ted Lasso" tied with "The Mandalorian" with seven each.