Disney's latest animated feature film, "Encanto," will have people all over the world asking, "How well do we know our own families?"

Set in Encanto, nestled in the mountains of Colombia, the movie centers on the Madrigal family, each of whom gets a magical power when they're very young. Everyone, that is, except for Mirabel.

In the film, Mirabel must figure out how she fits into her own family -- a question so many people have pondered, including the filmmakers.

"It started out really personal. [Directors] Jared [Bush] and Byron [Howard] were the ones who came up with this idea and they started out by researching their own families," co-writer Charise Castro Smith, who wrote the film with Bush, told "Good Morning America." "One of the big questions of the movie is, 'Do I really see my family for who they are?'"

"I think this is the first time that we've really tried to handle a large extended family," Howard added. "We have about a dozen principle characters who are very, very important to the story, and that was enormously challenging but the whole team really committed to that from the beginning."

Who are the characters? 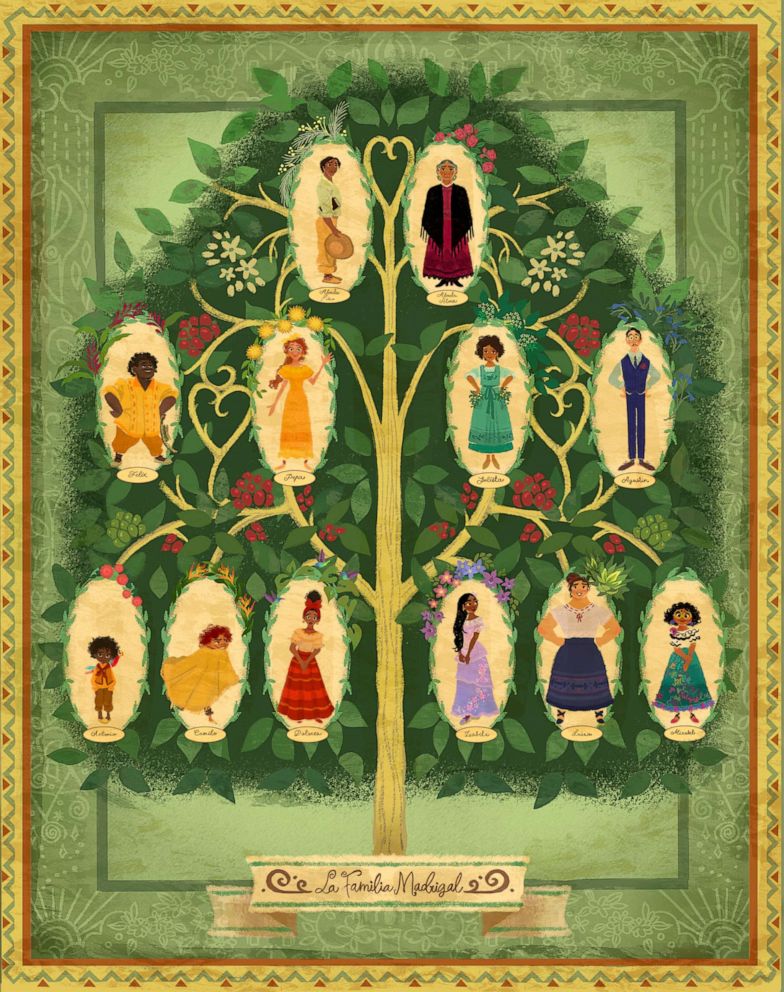 What role does Colombia play?

Actor and playwright Lin-Manuel Miranda, who wrote music for the film, was "very keen to have it be a definitive Latin American Disney musical," Howard said. After careful consideration, they decided to set the movie in Colombia.

"It was the home of magical realism, which we love and really influenced the storytelling in the film, but also because Colombia is the crossroads of music, culture and ethnicity," he said.

Bush noted that to pay homage to the country, "every frame has something for people to find."

"There are a lot of textiles throughout the movie, which is great, but there are also tiny mannerisms that I'm hoping people [who] are Colombian see and go, 'I know what that means,'" he added.

Castro Smith said there are Colombian terms of endearment and phrases sprinkled throughout the dialogue too.

Miranda, who won the Pulitzer Prize for writing the Broadway musical "Hamilton," wrote several new songs for "Encanto" while composer Germaine Franco, who co-wrote the score to Disney's 2017 film "Coco," handled the score. Two of the songs are entirely in Spanish, and audiences can expect a variety styles of music too, the filmmakers said.

"So many of the songs are so character-specific and the musical styles that he chose are [as well]," Castro Smith said. "One of the first songs Lin wrote for the movie was about [Mirabel's] very strong sister and he chose a sort of reggaeton-inspired music. It really influenced her character. Jared and I took that character creation back into the script."

"We worked with him really closely and in a very seamless way," she continued. "He didn't just write the music; he really influenced a lot of the characters and a lot of the story as well."

What is one of the lasting messages of the film?

"Encanto" is a celebration of diversity in more ways than one, Howard said.

"We thought with an ensemble cast, what a great opportunity to show this family and how they have succeeded with their differences being so important," he said. "Everyone fulfills a purpose in this family and that's one of the beautiful things you discover in the film."

John Leguizamo, who also stars in the film, opened up to "GMA" about what it meant to him to be in a film based in the country he was born and one which represents his culture.

"This is the highlight of my life, to see a whole Latinx cast in Disney's 60th movie," he said. "Disney is sort of the barometer of culture around the world. If you're in a Disney movie, your people have made it."

Where and when can the movie be seen?