Veteran Broadway and film star Elaine May won her first Tony for best leading actress in a play for "The Waverly Galery." Stephanie J. Block was named best actress in a musical for "The Cher Show" and "Tootsie"'s Santino Fontana won for best actor. Celia Keenan-Bolger walked off with best performance by a featured actress in a play honors for the Broadway adaptation of "To Kill a Mockingbird."

Best performance by a leading actor in a play went to Bryan Cranston for his portrayal of Howard Beal in the Broadway adaptation of the 1976 film "Network." It was the second win in as many chances for the Cranston, who also won in in 2012 for "All the Way." 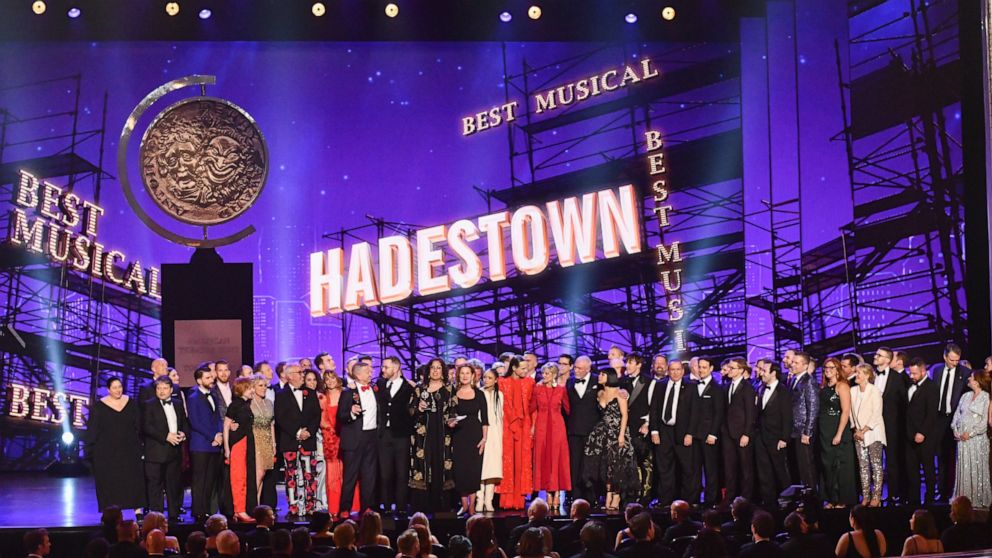 Charles Sykes/Invision/AP
The company of "Hadestown," accept the award for best musical at the 73rd annual Tony Awards at Radio City Music Hall on Sunday, June 9, 2019, in New York.

"Finally, a straight old white man gets a break," Cranston joked as he picked up the award. He ended his speech on a serious note, however, saying the real news people are under attack.

Cranston also figured into host James Corden's opening number about the importance of theater in the age of streaming TV. When the host of CBS' "The Late Late Show" caught the actor sneaking off to the bathroom during the song, Cranston yelled, "I'm bloated as hell and I'm not gonna take it anymore!" -- a parody of the "I'm mad as hell" signature line from "Network."

While picking up her award for directing "Hadestown," Chavkin lamented being the only female nominated in the category, and called for more diversity on Broadway, declaring that women and people of color "are ready to go."

Ali Stroker, the first wheelchair-using actress in a Broadway show and the first to be nominated for a Tony Award, won for best performance by a featured actress in a musical for her role in "Oklahoma!" The musical also took home the award for best revival of a musical. She dedicated the award to "every kid who is watching tonight who has a disability, who has a limitation or a challenge who has been waiting to see themselves represented, you are." 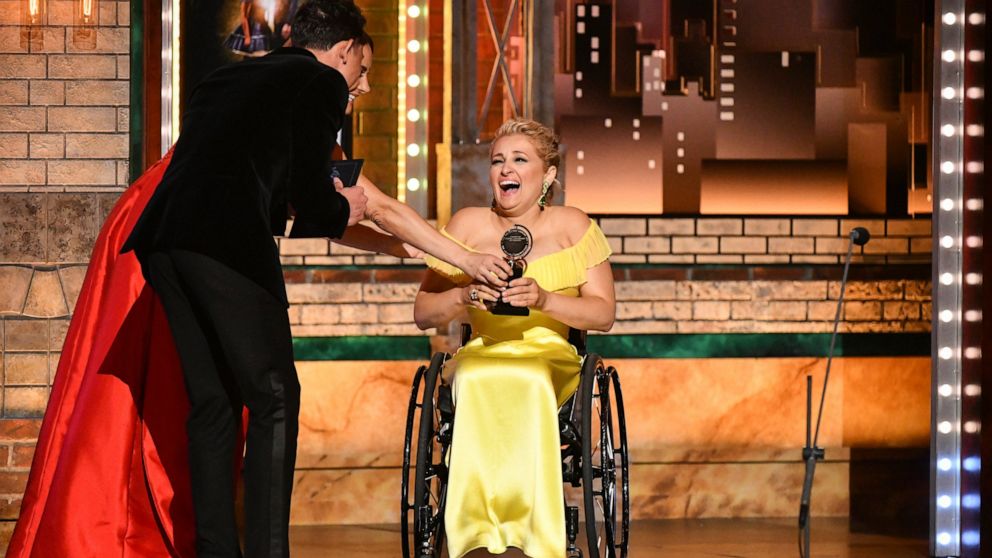 The Associated Press
Laura Benanti, from left, and Anthony Ramos present the award for best performance by an actress in a featured role in a musical to Ali Stroker for her performance in &quot;Rodgers &amp; Hammerstein's Oklahoma!&quot; at the 73rd annual Tony Awards at Radio City Music Hall on Sunday, June 9, 2019, in New York. (Photo by Charles Sykes/Invision/AP)

Best Revival of a Musical
"Oklahoma!"

Best Revival of a Play
"The Boys in the Band"

Best Performance by a Leading Actress in a Musical
Stephanie J. Block, "The Cher Show"

Best Performance by a Leading Actor in a Musical
Santino Fontana, "Tootsie"

Best Performance by a Leading Actress in a Play
Elaine May, "The Waverly Gallery"

Best Performance by a Leading Actor in a Play
Bryan Cranston, "Network"

Best Performance by a Featured Actress in a Musical
Ali Stroker, "Oklahoma!"

Best Performance by a Feature Actor in a Musical
André de Shields, "Hadestown"

Best Performance by a Featured Actress in a Play
Celia Keenan-Bolger, "To Kill a Mockingbird"

Best Performance by a Featured Actor in a Play
Bertie Carvel, "Ink"

Best Scenic Design of a Play
Rob Howell, "The Ferryman"

Best Costume Design of a Play
Rob Howell, "The Ferryman"

Best Direction of a Play
Sam Mendes, "The Ferryman"

Best Choreography
Sergio Trujillo, "Ain’t Too Proud -- The Life and Times of the Temptations"