Baker, the New York Times bestselling author of “Whisper Network,” is back with “The Husbands,” a searing and fun page-turner that’s a “Stepford Wives” gender-swap -- about how far someone will go to truly have it all. 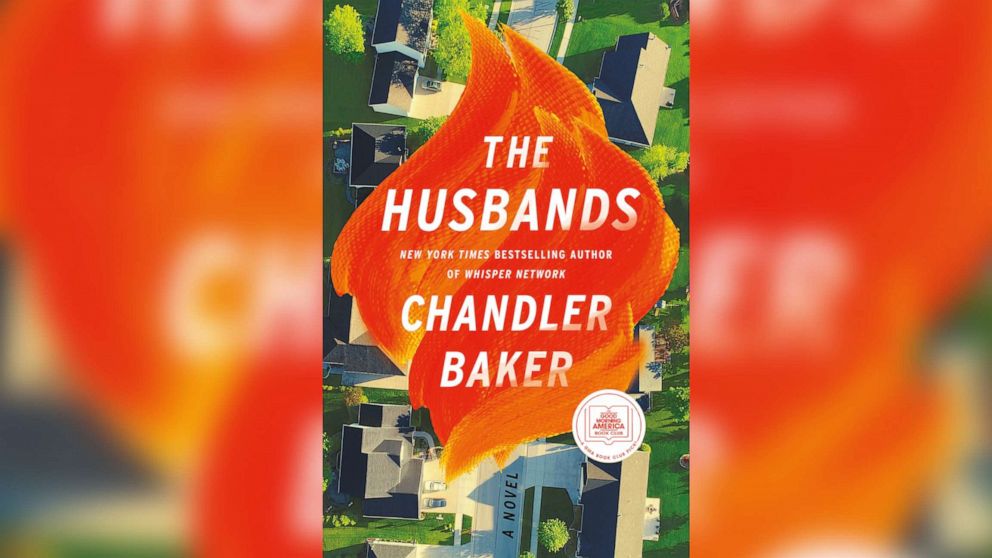 “The Husbands” follows the story of Nora Spangler, a successful attorney and hardworking mother who goes the extra mile to take care of her family. But lately, Nora’s been exhausted and wishes her husband would do more without having to be repeatedly reminded.

When she and her husband go house hunting in Dynasty Ranch, an exclusive suburban neighborhood, Nora meets a group of high-powered women -- a tech CEO, a neurosurgeon, an award-winning therapist, a bestselling author -- with enviable supportive husbands.

While at Dynasty Ranch, she discovers a recent accidental fire destroyed a house and killed the husband of one of the women. Nora is suddenly pulled into the lives of the women who ask her to help with the husband’s wrongful death case.

As she begins her investigation, Nora uncovers a plot that may explain the secret to having it all -- one that’s worth killing for.

“The novel imagines a world where the burden of the second shift is equally shared and what it might take to get there,” Baker told “Good Morning America.” “I know we’re going to have a lot to discuss.”

Nora is not in a fight with her husband.

She thinks about the phrasing conjured here: “in a fight.” An idiosyncratic idiom dredged from her middle school years and with it a vision of long-sleeved Hollister T-shirts, chopsticks through buns, and I’m-not-speaking-to-you-this-week. She’s thirty-five now, long past the stage of brushing her tricky curls into a cloud of frizz, but not so far that if she were in a fight this wouldn’t be an appropriately moody, anxious, and adolescent way to describe it, especially given the number of times Hayden has asked “What’s wrong?” and she has responded with “Nothing.”

“Nothing” is what you say when to say “everything” would be ridiculous.

She’s being a “drama queen”—that’s the term for it. But only in her head, where it doesn’t really count.

At a stoplight, they sit in their different silences, hers brooding, his oblivious. She’s a passenger in her own SUV, Hayden the driver, as she prefers, even though, with the seat pushed way back to accommodate a thickset former rugby player, it jacks with her settings. Hayden has a bullish neck and a smattering of bald scars cut into his hairline from where he’s had stitches. She finds them sexy even when she’s pissed, which, as a reminder, she’s not. Also, he’s got a fading blue tattoo peeking out from the hair on his right forearm, and, more often than she cares to admit, she finds herself feeling proud, because she never would have guessed she’d have grown into the type of woman to marry a man with an arm tattoo.

“It’s kinda far,” he says, not meaning anything by it.

“It’s not that far,” by which she means: Don’t start with me yet. “Look, it’s on the left. Here. See?” She points out the windshield to the neighborhood’s grand entrance, walls decked in hill country stone with the name DYNASTY RANCH spelled out in slanting cursive across its side. A fountain sprays a plume of water. It’s, yes, a bit ostentatious, but there are worse things, aren’t there?

Dynasty Ranch is an enclave community ten minutes outside of Austin’s city limits, nestled into a land of self-serve frozen yogurt shops, movie theaters with enormous reclining seats, and chain Mexican food restaurants that all boast kids’ playscapes. It’s quite exclusive. Or at least that’s what the tasteful home brochure had claimed when her secretary had dropped it into the mesh mail bin on her office desk. Really, they must have spent a fortune on advertising. Hayden grunts and steers into the left lane without using his blinker, a mistake which she hand-to-heart doesn’t mention.

Plenty of time, like the growing bulge of her stomach is a ticking time bomb, but Hayden, apparently, is happy to procrastinate for a little while before getting around to the tedious task of dismantling it. She thinks: Who in their right mind wouldn’t want to neutralize the threat straight away, have time to spare on the back end, a margin of error, a cushion? While Hayden believes: It will get done.

It will get done. But the part that he leaves out is that he’ll have nothing to do with the doing. It’s like he thinks their house, their toddler, their lives, are kept on track by magic. As though she is the family Rumpelstiltskin. He goes to bed and—voilà—see, Nora? All taken care of! And, my god, woman, why are you so sweaty?

They follow the notice for the open house, sign staked into the ground on flimsy tongs. But the first actual home doesn’t appear in Dynasty Ranch for nearly a half mile, which does seem like an awfully long way.

Vegetation is sparse. Where present, though, it’s meticulously manicured, making things feel organized and stress free. When they come across a house—mansion, more like—what she imagines inside is a large, walk-in pantry with those clear plastic bins lined neatly on the shelves, the ones with vacuum-sealed tops and black chalk-pen labels denoting the type of fibrous cereal inside. That’s the vibe of Dynasty Ranch on first glance.

They pass a man unloading groceries from the back of a Tahoe. He waves to them, the way that people do with passing boats.

Then—“What do you suppose happened there?” Hayden slows to a stop where on their right sit the scorched remains of a house. Black soot has been spat onto the grass and splashed up the rickety frame, but the feeling of black is all over, like Nora’s looking into a hole. Yellow caution tape crisscrosses where a door would have been, and sunlight catches the shards of broken glass that have been left behind. “You think anyone was inside?” Hayden asks, pressing the button to roll down her window for a better view.

The house was probably lovely. She feels sorry for whoever lived there. And now all of it—photo albums, carefully selected furniture, artwork bought together on vacation—up in flames.

“I don’t know.” Nora flattens into her seat. “But we probably shouldn’t stare.”

Hayden leans into the steering wheel, staring. “Remind me to check the smoke alarms, will you?”

Nora’s fingers tense at how easily her husband drops one more responsibility into her cup. Remind him.

She will, of course. Because she, in fact, does not want to die in a fire. But sometimes (meaning at all times, obviously) she feels as if there are no spare folds of her brain in which to cram the minutiae of their lives that she’s been charged with tracking.

He eases off the brakes and the wheels begin to roll and the neighborhood resumes, as if nothing happened. A left turn and then another—stone, brick, freshly painted wood siding, each neat, picturesque, the American dream—and soon they’ve arrived.

2913 Majestic Grove sits on a generous corner lot. A Texas star is embossed into the smooth surface of its circle drive, a cast-iron door at its crest.

“I don’t know.” Hayden climbs out of the car, puts his fists into the back of his hips, and stretches his crotch forward. “There’s not much walkability.”

“Where do we walk to now?” She comes around the hood of the car to meet him.

They bought their town house in the heart of Austin seven years earlier when Nora and Hayden had imagined a future strolling to brunch on South Congress, biking to work, and buying their produce from a local farmers’ market. Nora had loved the cracks in the bright yellow walls, the uneven tiles, the stairs that creaked. What she never imagined was the number of times she would add “call a plumber” to her already lengthy to-do list, or the fact that her garage door wouldn’t work for fourteen whole months because she had no idea what sort of person fixed garage doors, or the stark reality that after their daughter, Liv, was born, the two flights of switchback stairs would transform from charming feature into evil nemesis. All this before the accident. Before the idea of another baby in that house became wholly untenable.

“Yeah, but it’s the ability.” Hayden has kind eyes with happy bursts of wrinkles, the result of sun more than age, fanning out around the corners.

“Keep an open mind. Please,” she implores. Nora has already run the math. The only way they’re going to afford more space is if they make substantial sacrifices in the cool, hip location department. Given that she’s never really been all that cool or hip, the decision feels relatively easy.

He takes her hand and squeezes. The fight they are not in, after all, is only in her head, and so anytime she wants she can choose to make up. Even now, for example.

From The Husbands by Chandler Baker. Copyright (c) 2021 by the author and reprinted by permission of Flatiron Books.