Get ready to travel back in time with “GMA’s” Book Club pick for July. 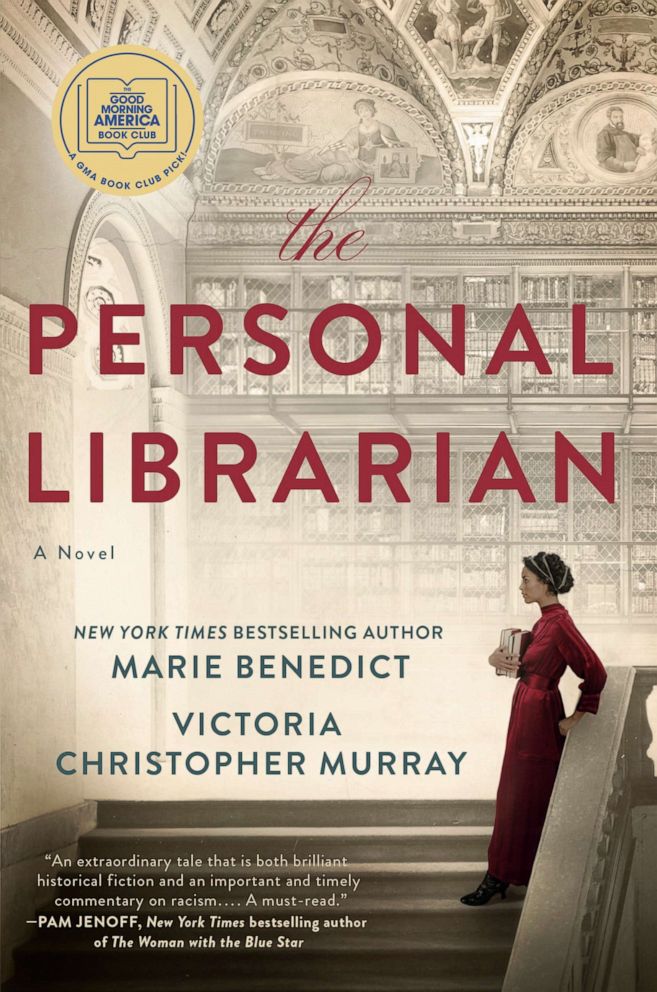 Berkley
"The Personal Librarian" by Marie Benedict and Victoria Christopher Murray is the "GMA" Book Club pick for July.

In her 20s, Belle was hired by the American financier and banker to curate a collection of rare manuscripts, books and artwork for his newly built Pierpont Morgan Library. She ended up becoming a fixture in New York City society and one of the most powerful people in the art and book world. She's known for her impeccable taste and shrewd negotiating for critical works as she helped create a world-class collection.

But Belle is hiding a secret -- in fact, she wasn’t born Belle da Costa Greene, but Belle Marion Greener, and was the daughter of Richard Greener, the first Black graduate of Harvard and a well-known advocate for equality and civil rights.

“In today’s times, [her dad] would be out there marching with everyone because he worked with Frederick Douglass, Booker T. Washington, and a number of other people that we talk about in the book,” said Murray, who mentioned how much of an influence Belle’s father had in her life. “He was fighting for civil rights and he never gave up until the day he died. … He believed in a country that didn’t believe in him.”

To protect her family and her legacy, Belle, who also allegedly had Portuguese heritage, is forced to hide her true identity and pass as white.

"Belle had to pass as white when she became the powerful personal librarian to J.P. Morgan in the 1900s," Benedict told "Good Morning America." "She hid her identity in plain sight saying, 'Just because I am a librarian, doesn't mean I have to dress like one.'"

"She was bold and she was brilliant and she was Black," added Murray. "If Black girl magic had a name it would be Belle da Costa Greene." 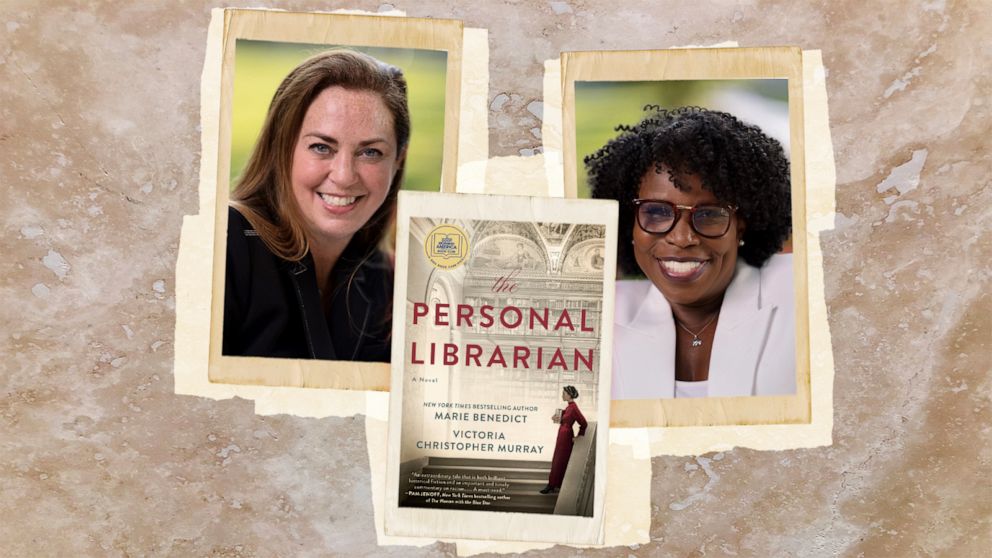 “Let’s take a look at you, Miss Greene.” He puffs on his cigar.

Stand tall, square shoulders, glance steady, never waver outwardly. Under Mr. Morgan’s gaze, I respond to Mama’s directives as if she were in the room, and I return his stare. Mr. Morgan must understand that I will not be cowed. And no matter what he thinks he sees in my skin tone or my nose that is a bit broader than my siblings’, he must believe I am a confident, competent white woman.

Mr. Morgan rounds his desk, and I don’t speak as he pauses in front of me. He begins to circle me slowly, as if he’s assessing an expensive rococo painting. I repeat Mama’s words in my head, and maintain a self-assured silence in the face of his inspection, understanding this is part of the test.

This is a rather obvious observation. He is over a foot taller than me with hands so wide a single one could span my waist.

When he stands in front of me again, he stares, although the corner of his mouth turns upward under his mustache as he does. “Such unusual eyes. Gray, somewhere between a smoky and silvery shade. Very compelling.”

I do not respond. What would I say?

“A real beauty.” Again, he speaks as if he’s appraising artwork, and I’m not sure if the known philanderer is considering me as a woman or inspecting me as a librarian. His comment does not invite a reply, so again, I say nothing. But then, he adds, “Da Costa. An unusual name.”

Repeating my practiced line, I say, “It’s my family name. My grandmother is Portuguese.”

“Ah.” He nods, but his eyes remain fixed on me. I inhale, and focus to maintain my confidence in the face of his scrutiny.

Then suddenly, he turns away. “I’ve heard what Junius thinks about these etchings, but I wonder about your view, Miss Greene. What do you think of acquiring the Vanderbilt Rembrandts?”

I exhale, grateful for the sudden shift and the opportunity to prove my expertise to Mr. J. P. Morgan.

I gather myself, draw from the extensive files in my mind. “Unlike his contemporaries, Rembrandt did all the work of the etchings for the prints himself—from incising the lines on the copper plate with various needles to submerging the plate in the necessary chemicals afterward. He thought etchings should be an important artistic medium, not simply an easy means to publicize his more expensive oil paintings, as most of his contemporaries did. From this perspective, Rembrandt’s etchings are masterworks by the genius himself, with a greater range of subjects than his more famous oil paintings.” I pause. “The etchings are remarkable. As the Pierpont Morgan Library will be, if I am placed in the position of librarian.”

In my peripheral vision, I see Junius flinch.

Mr. Morgan drinks me in, and for a long moment, I feel as if he sees all of me. Then, his mustache twitches, and I see a hint of a smile beneath the shadow cast by his swollen, misshapen nose and the downward turn of his thick black mustache. For a brief moment, the suggestion of a grin and the confidence he exudes remind me of my father. Lulled by the transitory resemblance, I am about to return Mr. Morgan’s expression when his face turns stormy.

I glance over at Junius, who is frozen, awaiting his uncle’s judgment. I’m reminded that Junius is my ally—and dare I say, my friend—and it is critical that I realign with him and demonstrate the affinity in our views.

“Echoing the sentiments of Mr. Morgan, if you acquire Mr. Vanderbilt’s collection, you will possess the world’s largest collection of Rembrandt etchings. Presented all together they will give scholars and collectors an unprecedented opportunity to study the evolution of the great master’s style and skill. It would bring a unique level of renown and attention to your collection.” This last statement is brash. This is Mr. Morgan’s private library, and he’s never publicly indicated he intends to open his institution to scholars. But I hope to hint at what might be possible, while appealing to his pride.

The only sound in the vast, two-floor study is the deafening tick of the gold clock on that enormous stone mantelpiece. What does this silence signal? Appreciation? Or, more likely, anger at my presumptuousness? Will he explode at me the way he erupted at that gentleman just before I entered his office? Before my thoughts wander too far to the other side, Mr. Morgan bellows, “Why do you think that I should hire you for my personal librarian, over all the other contenders I’ve interviewed, many of whom are older and more experienced than you? How will you make the Pierpont Morgan Library unparalleled?”

I take one step toward him. “Mr. Morgan, I am glad you pointed out that your other candidates are different from me, in experience, age, and”—I pause for emphasis—“gender. It is that exact divergence between my characteristics and everyone else’s that makes me the perfect candidate for the Pierpont Morgan Library. My relative inexperience means that I do not arrive with any staid, old preconceptions that hamper what the Pierpont Morgan Library can become; instead, my vision and ambition for the library are limitless. My youth means that I have boundless time and undivided energy to devote to you and your collection. My passion for rare manuscripts and incunabula means that I will be relentless in acquiring the ideal items to make your collection incomparable, learning from your expertise in negotiation and the marketplace as I do so, of course. And the fact that I’m a woman means that every time I enter a room, I will have everyone’s attention, which is exactly what the Pierpont Morgan Library deserves.”

He nods. “And how would you make my library incomparable?” But before I can answer, he continues, “I hope acquiring Thomas Malory’s Le Morte Darthur by the printer William Caxton is on your list of targeted accomplishments.” He peers at me as if he’s waiting for a reaction, and I am certain that I see a bit of a smirk on his face. “Because that Caxton is what I want.”

“It’s an extremely rare incunabula, one of only two copies, if I’m not mistaken.” Surprise fills his eyes. “But I will do everything in my power to bring that to your collection, if given the opportunity.”

His smile is unmistakable now. This volume was printed in 1485 by the famous printer and publisher William Caxton, who is credited with bringing the printing press to England. Entitled Le Morte Darthur, it recounts the legend of King Arthur and the Knights of the Round Table and their quest for the mythical Holy Grail. Is the acquisition of this particular elusive book Mr. Morgan’s own sacred quest?

Once again his eyes roam over me, but I stay focused. “Mr. Morgan, if given the chance, I will ensure that your library is unrivaled. And I will make the Pierpont Morgan Library itself the masterpiece you deserve.”