Kevin Hart had a direct response for people who wanted to hear more from him about the Oscars controversy that has dominated headlines over the past month regarding homophobic tweets he sent in the past.

"I'm over it," Hart said multiple times on "GMA" Wednesday morning when asked about his apology or the controversy. "There's no more conversation about it ... I'm over that, I'm over the moment."

Hart added that he apologized back in the late 2000s when the comments first happened and multiple times after.

The actor said he has given all he can thus far and "said everything I can possibly say."

"If you didn't [hear the apology], I don't know what you're looking for," he continued. "I'm a good person, I love to love, if you don't see that then it's a problem with you."

When asked if he is hosting the Oscars this year, he simply said, "No" and that it's too late to prepare.

"It's hard to predict what can happen. I don't want people to think there's a thing about me and the Academy," he added.

His comments come two days after he formally apologized again to the LGBTQ community on his SiriusXM show "Straight from The Hart" for past homophobic comments and slurs.

"Once again, Kevin Hart apologizes for his remarks that hurt members of the LGBTQ community. I apologize,” he said on his show. "We thought it was OK to talk like that, because that’s how we talked to one another ... This is wrong now. Because now we’re in a space where I’m around people of the LGBTQ community, and I’m now aware of how these words make them feel, and why they say ‘That s--- hurt because of what I’ve been through.’" 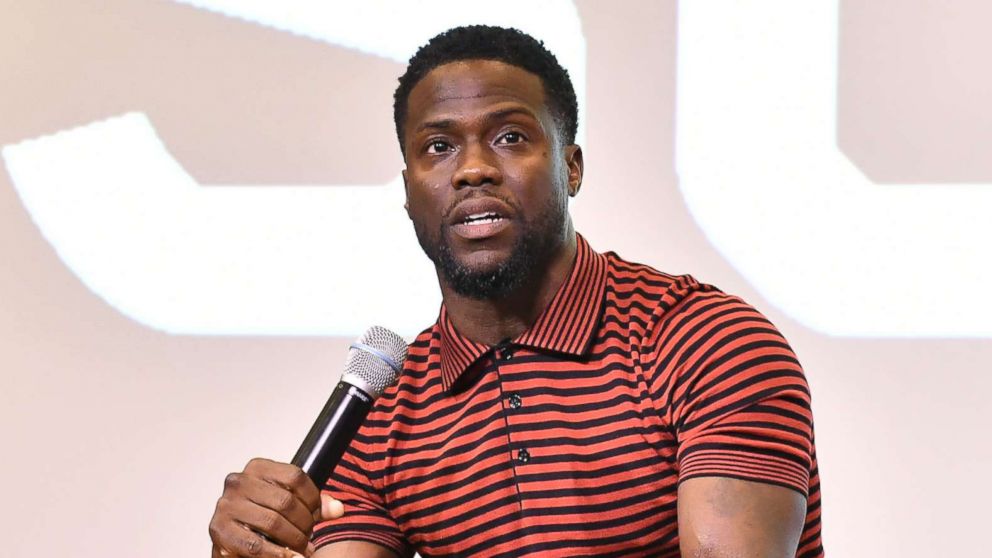 Hart added that with his future standup and comedy acts, he would also make sure he doesn't say or do anything offensive towards the community.

"The fight is the will and want for equality. I’m riding with you guys. I understand you," he continued, adding that he hopes the LGBTQ community can forgive him and accept he's a different person from the one who sent those tweets almost a decade ago.

But he also said that, "In the fight for equality, that means that there has to be an acceptance for change. If you don’t want to accept people for their change, then where are you trying to get to the equal part? Where does the equality part come in?"

Later on "GMA," Hart opened up about his new movie, "The Upside" and how wonderful it was to work alongside Bryan Cranston, saying his co-star has simply perfected his craft.

Hart said the script was "amazing" and that he took on this more serious role as a "challenge," to show his fans there was a different side to him.

"I think it's my best work to date," Hart said about playing an ex-con who cares for a quadriplegic.

Hart and Cranston tried to be as authentic to the characters as they could, the actor said, adding that the film really dives into perceptions, considering the two men come from two very different backgrounds.

Hart's "GMA" interview Wednesday capped off a roller coaster few weeks, which date back to when he was announced as the host for the Oscars on Dec. 4.

Just three days later, he stepped down after homophobic tweets from eight years ago re-emerged; he said he's already apologized for the tweets and that he's not the same person he was at that time.

In a post on Instagram, Hart said he got a call from the Academy of Motion Picture Arts and Sciences and was asked to apologize for his prior tweets or step down as host.

Then last week, he spoke to Ellen DeGeneres in his first interview since stepping down, and she asked him to reconsider hosting the awards show.

DeGeneres -- a past Oscars host herself -- said she called the Academy and asked them to reconsider having Hart host. She says its reps instantly replied that they still wanted the funnyman to be the night's MC.

"They're gonna win if you don't host the Oscars," DeGeneres said, referring to "trolls" online. "You can’t let them destroy you and they can't destroy you because you have too much talent."

Some on social media took offense with DeGeneres supporting Hart and the interview.

"I feel like if you’re not homophobic anymore, you shouldn’t mind apologizing for your past homophobia again," one Twitter user wrote.

Another added, "The only thing @KevinHart4real proved by going on Ellen was that he is a terrible actor with zero genuine remorse who didn’t have the decency to address his ignorance. No, they weren’t 'haters' who came after you."