After making an appearance during her global superstar mother’s Super Bowl 54 halftime performance, Emme Muñiz, the daughter of Jennifer Lopez and Marc Anthony, is accomplishing another impressive achievement.

Emme is becoming a published author at just 12 years old. Her new picture book, "Lord Help Me," containing everyday prayers, is out Tuesday.

Lopez told "Good Morning America" that her daughter’s project has been a few years in the making and was inspired by her love of sloths.

"She's obsessed with sloths and has been since she was a little girl -- since we went on our first tour when she was 4 years old," Lopez shared. "We went to go see a sloth farm, a sanctuary I think. She fell in love with them then.”

Emme came up with the idea for the book while talking about praying with her nanny, Jess Morrison, one night. Morrison told Lopez that Emme said she thought kids needed to be taught how to pray.

"They just kind of had this conversation, and she was like, maybe we can write a book where we can save the sloths, and we can use the money to save the sloths," Lopez said about her daughter.

After the idea was developed, Lopez said Emme, who she described as "very artistic," sat down and wrote the book and drew pictures for it.

The mother-daughter duo, along with Lopez's son, Max, are also joining forces for a fun new project, the "Yoplaitime Challenge," to encourage families to get active during quarantine.

The trio is asking families to share videos showing off their moves while dancing to Lopez’s new song "Pa Ti."

"I'm going to show you our moves together, and you show me your moves and you can find it on Instagram Reels if you want to join," Lopez explained about the project, which she is participating in through her partnership with Yoplait.

For every Instagram Reels post shared by Oct. 30 2020, with the hashtag #YoplaitimeDonation, Yoplait will donate $1 to Feeding America, up to a maximum of $300,000. 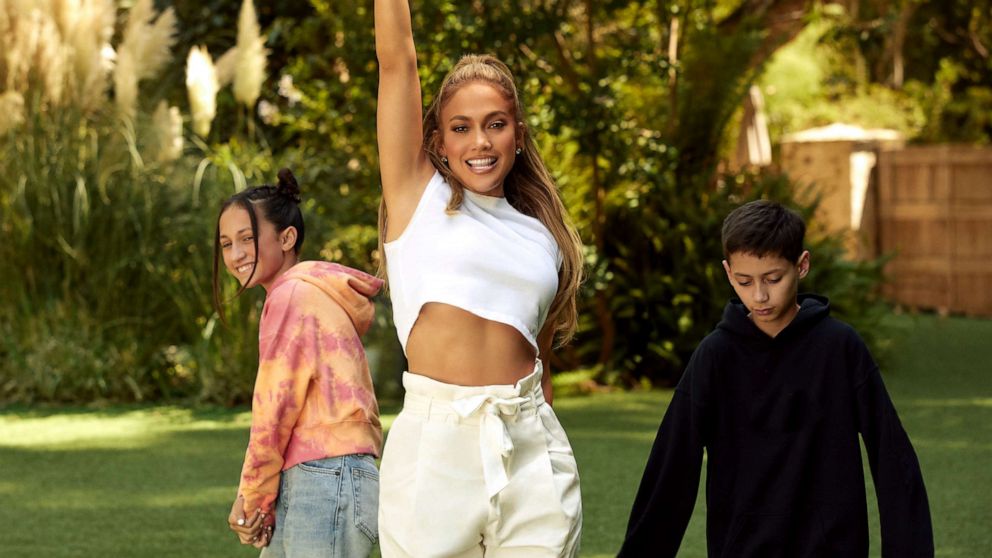 General Mills
Jennifer Lopez and her children Emme and Max are challenging families across the nation to show off their moves.

Lopez said she wanted to take part in this opportunity because she feels people are spending "so much time in front of screens" during the pandemic.

"The one thing that's kind of kept me sane has been working out, dancing, because it's just so easy when you're home to kind of get lazy," she added. "It's important to kind of keep moving because releasing those endorphins is what keeps us happy and sane. We forget that, and it's just too easy to get into a very sedentary routine.”

She admitted that although her kids inherited her love for music, the dancing gene wasn’t as strong.

12:30
Jennifer Lopez just added a new chapter to her story, getting married to Ben Affleck.

"I think everybody in the world loves to dance," she said. "Do they want to be dancers like me? No, I don't think so. I think they're more on the singer side, but they really -- to get them to do the little 'Pa-Ti' challenge with us was not the easiest thing in the world but once they did it, they had fun.”

"Pa' Ti" is part of her new two-song collaboration with artist Maluma. She said that the duo made an entire album, featuring individual songs and tracks together, for their upcoming movie, "Marry Me," out Feb. 14, 2021.

"We came up with these two songs that we literally fell in love with, and we were like, we should put these out before the film and play our characters Kat and Bastian and introduce everybody to these two amazing characters from the movie," Lopez said.

"Maluma is amazing," she added. "I love working with him, and we had so much fun doing the video and working together and doing the movie. This will be kind of the beginning of this whole 'Marry Me' era.”

Amid sharing new music, preparing for her upcoming movie release and sharing this new dance challenge, Lopez wants to spread positivity with her fan base.

"It starts with you ... You have to vote -- you think your one vote doesn't count, but it does. You think your one act of kindness doesn't count, but it does," she added. "The main thing that I would say to everybody is to just be your best self and make your best choices in every moment out of love, and I think we can have a better world for our kids and everybody.”