Actor Johnny Depp faced nearly six hours of cross-examination Thursday, the third day in a row he testified in his defamation case against actress Amber Heard whom he accuses of verbally and physically abusing him during the couple's nearly two-year marriage.

In testimony Tuesday and Wednesday, Depp told jurors at Fairfax County Circuit Court in Virginia that he never struck Heard despite accusations she made in court papers that Depp often turned violent throughout their marriage.

Depp is suing Heard for $50 million over a 2018 op-ed she wrote in the Washington Post in which she called herself a domestic abuse victim without naming Depp. Heard responded with a $100 million defamation countersuit and has yet to take the stand.

Here are some of the key points from Thursday's cross-examination:

On Thursday, Depp faced questions from Heard’s legal team that attempted to portray him to the seven-member jury as a prodigious drug abuser and misogynist through text messages to friends and associates.

Heard's attorney, J. Benjamin Rottenborn, began the day recounting Depp’s previous testimony related to the actor’s parents in which he described alleged physical, verbal and psychological abuse he received from Betty Sue Palmer, his late mother. On Wednesday, Depp testified his relationship with Palmer was not unlike the one he had with Heard.

Rottenborn tried to soften the comparison, recounting Depp’s testimony that the actor saw his father, John Depp Sr., "punch walls when in arguments" with Palmer. Depp said his father acted solely "from the abuse he was taking from" Palmer.

Depp listened to Rottenborn read text messages the actor sent before and during his marriage that disparaged Heard and suggested Depp’s dependency on drugs and alcohol. 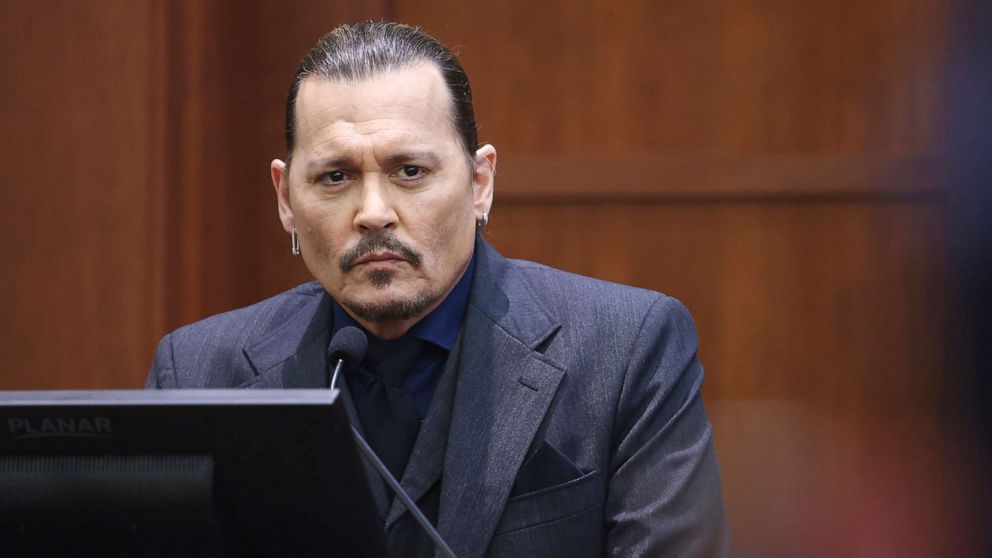 Jim Lo Scalzo/Pool via AP
Actor Johnny Depp listens as he testifies in the courtroom at the Fairfax County Circuit Court in Fairfax, Va., April 21, 2022.

"Let’s drown her before we burn her," Depp allegedly wrote to "WandaVision" actor Paul Bettany regarding Heard.

When questioned about his relationship with musician Marilyn Manson, Depp admitted the two men drank alcohol and did cocaine together and he once gave Manson “a pill so he would stop talking so much." In another text message, Depp wrote, “I’m not unhappy. I’m insane. Big difference … May I be ecstatic again?”

Depp said it was “very likely” he was referring to taking the drug ecstasy.

The jury was also shown photographs, taken by Heard, that Rottenborn used to suggest Depp’s drug abuse. One photo showed what looked to be lines of cocaine next to a small metal box labeled “property of JD.” Depp denied the box was used to carry cocaine.

“It looks like it would fit some cocaine. Cocaine, in my experience, normally is given in plastic bags. When you put it in a box like that, chances are very good you’ll leave a long line of cocaine behind you walking down the street,” he said.

Another picture showed Depp unconscious on a couch holding ice cream but he denied Rottenborn's characterization it was because of drugs.

“That’s not a blackout, that’s sleep,” he said. He blamed overexertion and long workdays, as well as an addiction to oxycodone used to help him rest.

He added that Heard staged the photo by putting the ice cream in his hand to make it looked like he passed out while eating.

“She knew what was going to happen; I would fall asleep, and it would drop and that’s a wonderful picture for her to take,” he said.

Here are some of the key points from Depp's testimony Wednesday:

Depp told a Virginia jury on Wednesday that he was psychologically and physically abused at the hands of his ex-wife Amber Heard, in his second day of testimony against the "Aquaman" actress.

Depp claims his finger was severed after an alleged violent altercation 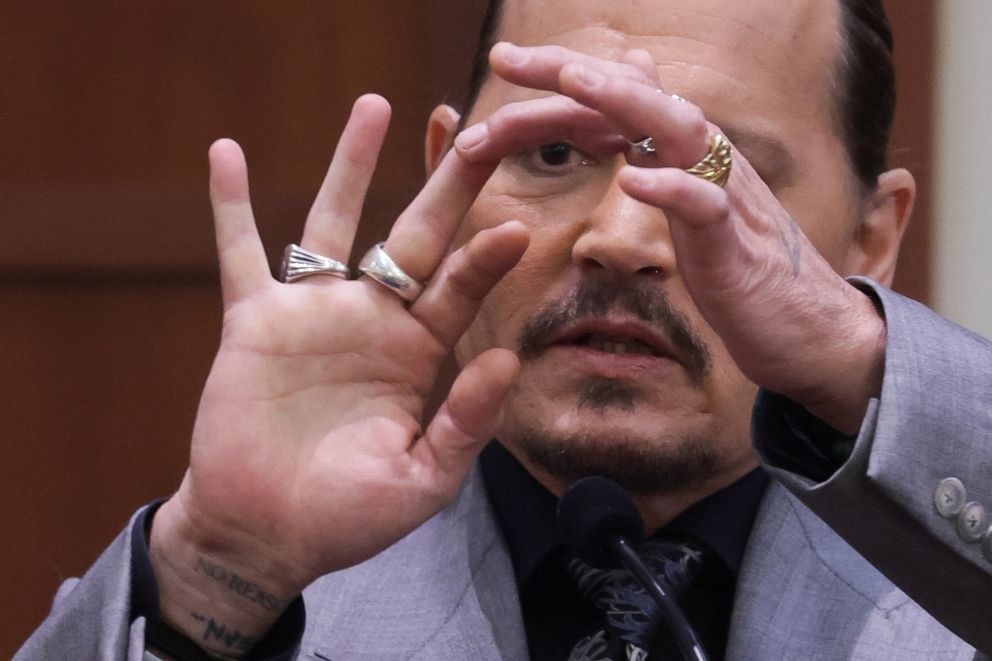 Evelyn Hockstein/Pool via Reuters
Actor Johnny Depp displays the middle finger of his hand, injured while he and his ex-wife Amber Heard were in Australia in 2015, as he testifies during his defamation trial against Heard at the Fairfax County Circuit Courthouse in Fairfax, Va., April 20, 2022.

The alleged 2015 vodka-bottle altercation happened after a sober Depp fell off the wagon, the actor claimed. While he said he took "his first drink of alcohol in some time," Heard berated him, snatched the bottle and "hurled" it at his head, he claimed.

It missed, Depp said. But then he grabbed another larger bottle of vodka, poured himself another shot and drank it. Heard again took the bottle and flung it, making contact with him, Depp testified.

"I felt heat, and I felt as if something were dripping down my hand. And then I looked down and realized that the tip of my finger had been severed," he said. "Blood was just pouring out."

"Nothing made sense," he continued. "I knew in my mind and in my heart this is not life… No one should have to go through this."

Depp then began writing in his own blood on the walls "lies that I had caught [Heard] in," he said.

Heard watched on from her seat in court, as televised on the livestream, occasionally taking notes.

Depp testified earlier in the morning about his substance abuse and painful attempts at detoxing, all the while describing what he called constant "bullying" he says he endured during his tumultuous relationship with Heard. 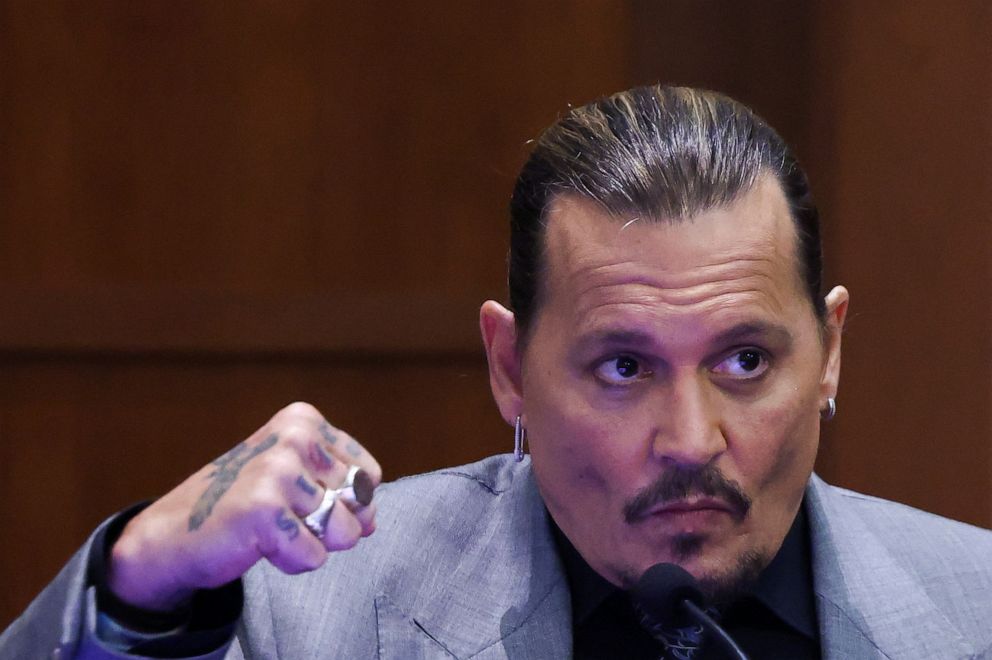 Evelyn Hockstein/Pool via Reuters
Actor Johnny Depp demonstrates how he claims his ex-wife Amber Heard punched him as he testifies during his defamation trial against Heard, at the Fairfax County Circuit Courthouse in Fairfax, Va., April 20, 2022.

Depp, donning shades on the stand, told the jury he felt "there was not a word I could say," when reports began to come out that he had abused Heard.

The allegations surfaced in a May 2016 temporary restraining order filed by Heard, around a week after she had filed for divorce from Depp. The actor's attorney showed him a People magazine article detailing some of the allegations.

"I felt ill, I felt sick," he said of their impact on him. "There was no truth in it whatsoever, and the fact that it was coming down on me so hard and so quickly, and how it gained momentum around the world."

He said as the #MeToo movement was starting, there were "people looking at you differently."

"Once [the #MeToo movement] happened, it just went into skyrocket mode," he continued, describing it as "running between drops of lava." "You're trying to run between raindrops that kill you and destroy you." 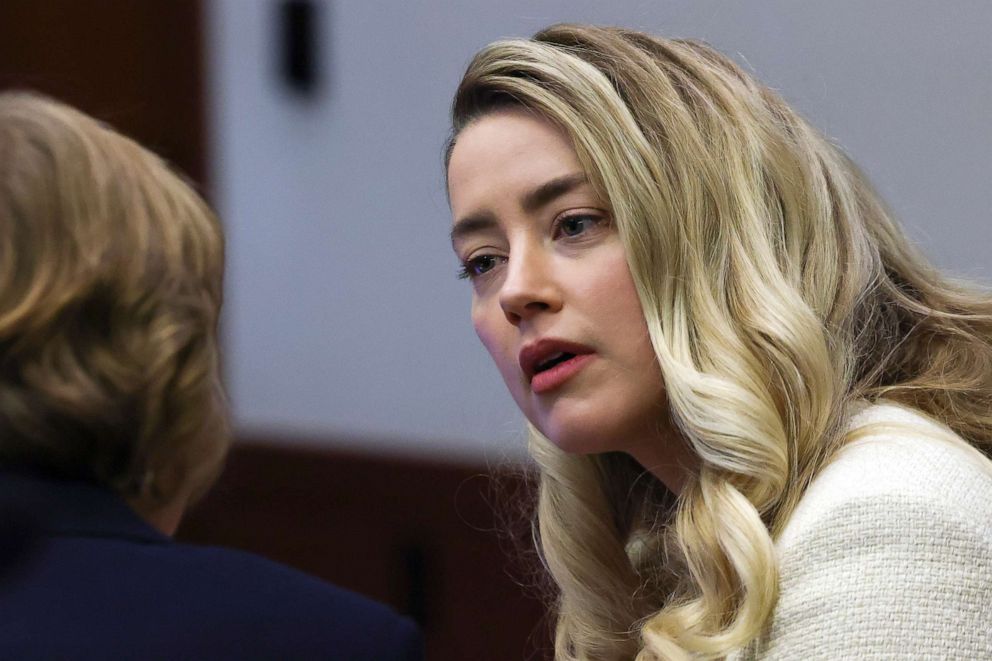 Evelyn Hockstein/Pool via AP
Actor Amber Heard speaks to her attorney during a hearing in the courtroom at the Fairfax County Circuit Court in Fairfax, Va., April 20, 2022.

Depp's counsel played a number of recorded tapes apparently between Depp and Heard, which he said exemplified the tone, aggression and "need for a fight" from Heard.

Heard replies, "I didn't punch you. I'm sorry that I didn't hit you across the face in a proper slap, but I was hitting you. I was not punching you."

"Don't tell me what it feels like to be punched," Depp replies on the tape.