By Kelly McCarthy, Katie Conway
Share —
Sign up for our newsletters to get GMA delivered to your inbox every morning!

After being selected by the Detroit Lions as the No. 1 overall draft pick in 2009 and 12 seasons without a playoff win before being traded to the Los Angeles Rams, quarterback Matthew Stafford will make his Super Bowl debut at SoFi Stadium against the Cincinnati Bengals on Sunday.

His wife, Kelly Stafford says she knows the scrutiny he's faced and opened up to "Good Morning America" in an exclusive interview ahead of the Super Bowl.

"I am so excited for him, I mean he has worked his butt off for a long time," she said. "He had so much pressure on him. That team had so much pressure on them. And if they didn't make it to the Super Bowl they were a bust, you know? So now that that pressure is kind of taken off in a way, he can just go play this game and have some fun, while he's doing it."

1:02
Kelly Stafford, wife of Los Angeles Rams quarterback Matthew Stafford, said the embrace let out emotions of the struggles they both had to overcome.

After the NFC championship win, Matt Stafford credited his wife for fueling his performance.

"I couldn't have done it without her. She's an unbelievable part of my life," the quarterback said in a post-game press conference. "She's been through a lot with me, and we've leaned on each other at separate times to help ourselves get whatever we're having to get through."

The couple battled through a terrifying health scare in 2019 when Kelly Stafford successfully underwent a 12-hour surgery to remove an acoustic neuroma from her cranial nerves.

"I wouldn't be here today, without him," she told "GMA." "He was the one that really encouraged me to go get checked and fought with me through that entire battle," she added.

Following her surgery, Stafford said she had to relearn to walk and was forced to take time away from their young daughters throughout her recovery period.

"They said -- 'you can't have any kids around you'" she recalled, adding that there couldn't be anything around that could throw off her balance or risk falling and injury. "We actually had to say goodbye to our kids, for I think about three weeks and Matthew really became the most amazing caregiver and it didn't surprise me, I guess it just more impressed me."

Since their family's move to LA, Kelly Stafford let fans behind the scenes on her podcast, "The Morning After," where she talks about everything from parenting and mental health to football. 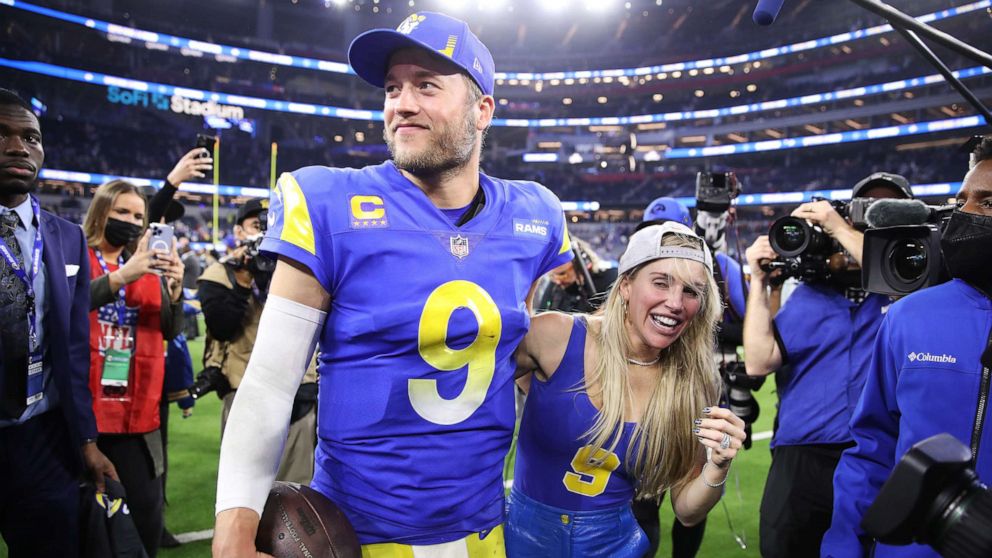 "It's something that's my own, and I feel like sometimes especially being the wife or a significant other of a professional athlete or anyone who has this kind of limelight you tend to lose yourself," she said. "And I just felt as a mom in particular it's mainly for moms to just come and be like 'hey, no one has their stuff together.' Like if we can get through these days and our children are happy and healthy that's all you can hope for."

She said she already has a plan for filming the Monday after the Super Bowl.