Marvel Studios boss Kevin Feige returned to San Diego Comic-Con over the weekend and unveiled the studio's timeline into 2025.

In addition to revealing how Phase 4 will end, fans were given quite a bit of information about what Phase 5 will encompass and how Phase 6 will begin.

Various animated Marvel projects were announced, including new seasons of returning favorites as well as brand new shows to look out for.

Check out everything Marvel announced at San Diego Comic-Con 2022:

The fun began with a look at the upcoming streaming series "She-Hulk: Attorney at Law," starring Tatiana Maslany as the titular green lawyer Jennifer Walters, who specializes in superhuman-oriented legal cases. In the show, Jennifer "must navigate the complicated life of a single, 30-something who also happens to be a 6-foot-7-inch superpowered hulk," according to a synopsis.

Series directors Kat Coiro and Anu Valia, as well as head writer Jessica Gao, were joined by Maslany and other cast members, including Ginger Gonzaga and Jameela Jamil, for an onstage Q&A and the debut of the show's official trailer.

Familiar faces that can be seen in the nine-episode comedy series are Mark Ruffalo as Smart Hulk, Tim Roth as Emil Blonsky/the Abomination and Benedict Wong as Wong. The cast also includes Josh Segarra, Jon Bass and Renée Elise Goldsberry.

"She-Hulk: Attorney at Law" begins streaming on Disney+ on Aug. 17. 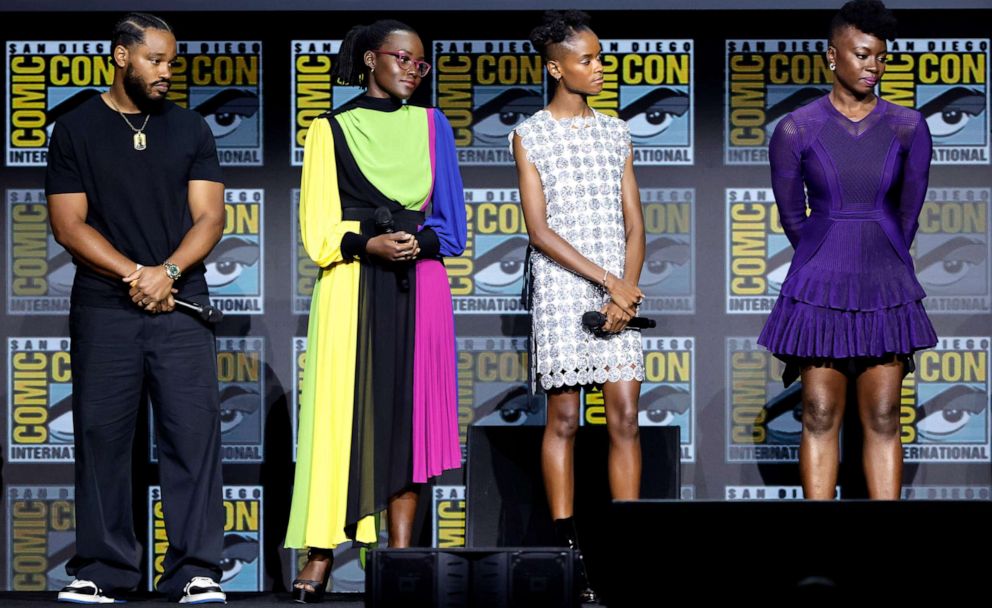 In the sequel to the blockbuster 2018 film -- which was nominated for best picture at the Oscars the following year -- fans find the beloved characters "fight[ing] to protect their nation from intervening world powers in the wake of King T'Challa's death," according to a synopsis. Boseman, who played T'Challa, aka Black Panther himself, died in August 2020 at the age of 43, following a private battle with cancer.

"As the Wakandans strive to embrace their next chapter, the heroes must band together ... and forge a new path for the kingdom of Wakanda," the synopsis reads.

Phase 5 kicks off with "Ant-Man and the Wasp: Quantumania."

Paul Rudd's Scott Lang and Evangeline Lily's Hope Van Dyne are returning for their third Ant-Man movie together, which also stars Michael Douglas and Michelle Pfeiffer as Hank Pym and Janet Van Dyne, respectively. According to the film's synopsis, the crew "finds themselves exploring the Quantum Realm, interacting with strange new creatures and embarking on an adventure that will push them beyond the limits of what they thought was possible." 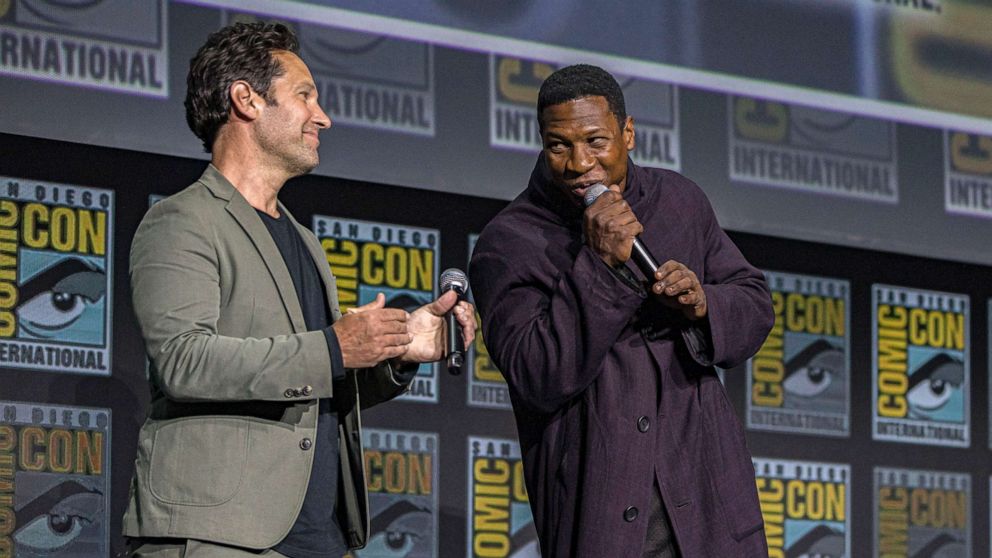 Director Peyton Reed and stars Rudd, Lily, Jonathan Majors (Kang) and Kathryn Newton (Cassie Lang) joined Feige over the weekend for an onstage Q&A and a first look at the film.

"Secret Invasion" was introduced by Cobie Smulders (Maria Hill), who joined Feige to discuss the upcoming series and show a clip of what fans can expect.

"Secret Invasion" was introduced at San Diego Comic-Con by Cobie Smulders, who plays former S.H.I.E.L.D. deputy director Maria Hill in the Marvel Cinematic Universe. Smulders joined Feige to discuss the upcoming series and promote a clip of what fans can expect.

The show stars Samuel L. Jackson as Nick Fury and Ben Mendelsohn as the Skrull general Talos, two characters who first met in 2019's "Captain Marvel." Billed as a "crossover event series," it will showcase "a faction of shapeshifting Skrulls who have been infiltrating Earth for years."

Feige was joined by director James Gunn and several cast members, including Chris Pratt, Karen Gillan, Pom Klementieff, Sean Gunn, Will Poulter and Maria Bakalova, to discuss "Guardians of the Galaxy: Vol. 3" and give fans a special look at the upcoming film.

Chukwudi Iwuji also made a surprise appearance, revealing to the audience -- in costume, no less -- that he would be playing High Evolutionary. 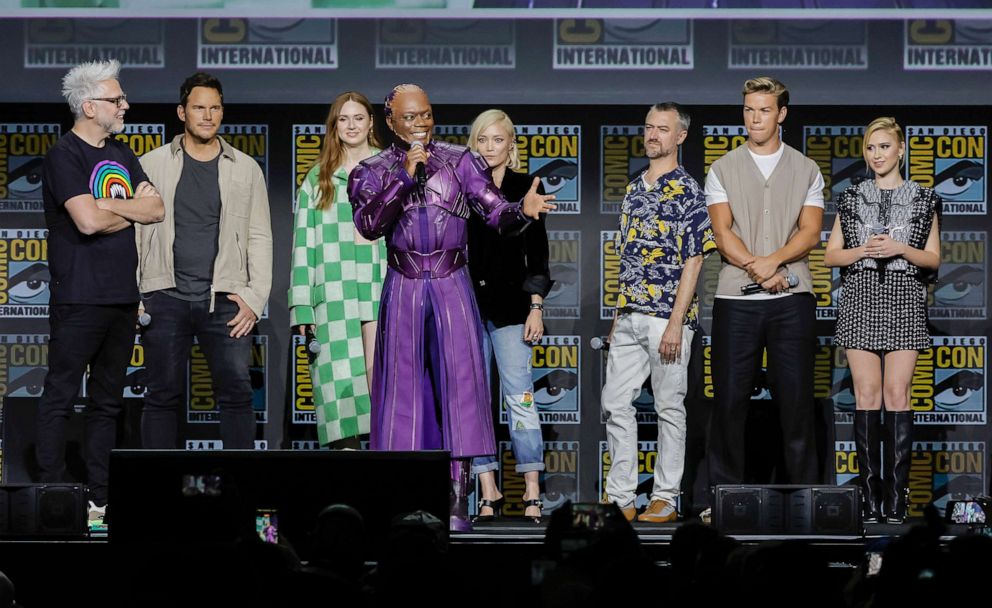 According to the synopsis, the film will find the titular band of misfits "looking a bit different these days."

"Peter Quill, still reeling from the loss of Gamora [in 2019's 'Avengers: Endgame'], must rally his team to defend the universe along with protecting one of their own," the synopsis reads. "A mission that, if not completed successfully, could quite possibly lead to the end of the Guardians as we know them."

Other upcoming Phase 5 Marvel series coming to Disney+ were discussed over the weekend, including "Echo" and the Tom Hiddleston-led "Loki" season 2, both set for summer 2023. "Ironheart" will debut in fall 2023 while "Agatha: Coven of Chaos," which stars Kathryn Hahn as the sorceress Agatha in the "WandaVision" spin-off, starts shooting later this year, with a debut set for winter 2023.

Marvel announced even more films for Phase 5. Among them are "The Marvels," from director Nia DaCosta and starring Brie Larson, Iman Vellani and Teyonah Parris, which arrives in theaters on July 28, 2023.

Also revealed for the first time were "Captain America: New World Order," starring Anthony Mackie, and "Thunderbolts," which ends Phase 5 and is described as featuring "an exciting new group of heroes."

A trio of films were announced for Phase 6, including "Fantastic Four," which will kick things off when it arrives in theaters on Nov. 8, 2024.

Also unveiled were two back-to-back Avengers films: "Avengers: The Kang Dynasty" and "Avengers: Secret Wars," slated to arrive in theaters in 2025, on May 2 and Nov. 7, respectively. 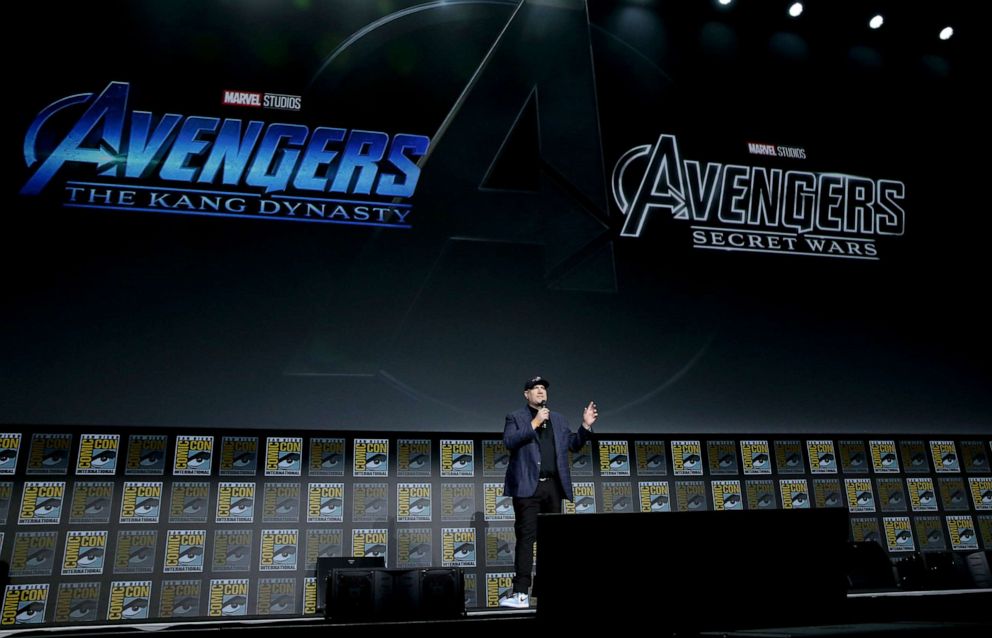 The Marvel Cinematic Universe is about to get a lot more animated. During a panel at San Diego Comic-Con, fans got a look at the new projects coming to Disney+ from Marvel Studios Animation.

Here's a look at what was revealed: