"The Midnight Library" by bestselling author Matt Haig is the "GMA" Book Club pick for October!

In this thought-provoking, time-traveling novel, Nora Seed finds herself in a magical library between life and death filled with all the lives she could have led. Every book is a chance to try another life. To undo a mistake, to make a different choice. To see how things would be different. What would you do?

Nora is depressed by her current life when she winds up in the library and is confronted with different possibilities and choices. (Should she have stayed with her ex? Followed her dream of becoming a glaciologist? A rock star? Gotten coffee with that cute neighbor?)

We follow Nora as she gets a chance to live all the lives she could have led and discovers what makes life worth living in the first place. 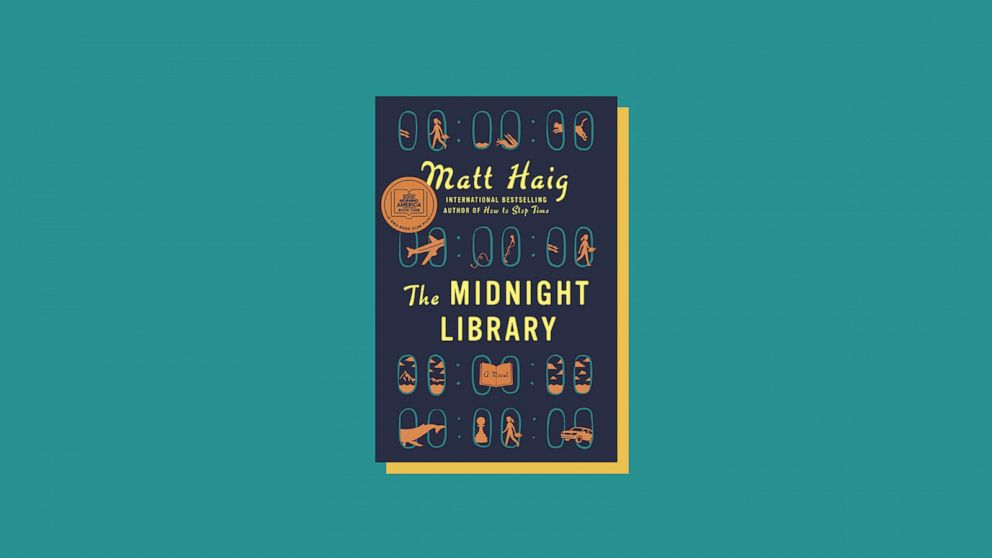 At first the mist was so pervasive that she could see nothing else, until slowly she saw pillars appear on either side of her. She was standing on a path, some kind of colonnade. The columns were brain-grey, with specks of brilliant blue. The misty vapours cleared, like spirits wanting to be unwatched, and a shape emerged.

The shape of a building. About the size of a church or a small supermarket. It had a stone facade, the same colouration as the pillars, with a large wooden central door and a roof which had aspirations of grandeur, with intricate details and a grand-looking clock on the front gable, with black-painted Roman numerals and its hands pointing to midnight. Tall dark arched windows, framed with stone bricks, punctuated the front wall, equidistant from each other. When she first looked it seemed there were only four windows, but a moment later there were definitely five of them. She thought she must have miscounted.

As there nothing else around, and since she had nowhere else to be, Nora stepped cautiously towards it.

She looked at the digital display of her watch.

Midnight, as the clock had told her.

What’s happening? she wondered. What the hell is going on?

Maybe this place would hold some answers, she thought, as she walked inside. The place was well lit, and the floor was light stone – somewhere between light yellow and camel-brown, like the colour of an old page – but the windows she had seen on the outside weren’t there on the inside. In fact, even though she had only taken a few steps forward she could no longer see the walls at all. Instead, there were bookshelves. Aisles and aisles of shelves, reaching up to the ceiling and branching off from the broad open corridor Nora was walking down. She turned down one of the aisles and stopped to gaze in bafflement at the seemingly endless amount of books.

The books were everywhere, on shelves so thin they might as well have been invisible. The books were all green. Greens of multifarious shades. Some of these volumes were a murky swamp green, some a bright and light chartreuse, some a bold emerald and others the verdant shade of summer lawns.

And on the subject of summer lawns: despite the fact that the books looked old, the air in library felt fresh. It had a lush, grassy, outdoors kind of smell, not the dusty scent of old tomes.

The shelves really did seem to go on for ever, straight and long towards a far-off horizon, like lines indicating one-point perspective in a school art project, broken only by the occasional corridor.

She picked a corridor at random and set off. At the next turn, she took a left and became a little lost. She searched for a way out, but there was no sign of an exit. She attempted to retrace her steps towards the entrance, but it was impossible.

Eventually she had to conclude she wasn’t going to find the exit.

‘This is abnormal,’ she said to herself, to find comfort in the sound of her own voice. ‘Definitely abnormal.’

Nora stopped and stepped closer to some of the books.

There were no titles or author names adorning the spines. Aside from the difference of shade, the only other variation was size: the books were of similar height but varied in width. Some had spines two inches wide, others significantly less. One or two weren’t much more than pamphlets.

She reached to pull out one of the books, choosing a medium-sized one in a slightly drab olive colour. It looked a bit dusty and worn.

Before she had pulled it clean from the shelf, she heard a voice behind her and she jumped back.

‘Be careful,’ the voice said.

And Nora turned around to see who was there.

‘Please. You have to be careful.’

The woman had arrived seemingly from nowhere. Smartly dressed, with short grey hair and a turtle-green polo neck jumper. About sixty, if Nora had to pin it down.

But before she had finished the question, she realised she already knew the answer.

Her face was one of kind but stern wisdom. She had the same neat cropped grey hair she’d always had, with a face that looked precisely as it always did in Nora’s mind.

For there, right in front of her, was her old school librarian.

She remembered the day her father died, when Mrs Elm gently broke the news to her in the library. Her father had died suddenly of a heart attack while on the rugby field of the boys’ boarding school where he taught. She was numb for about half an hour, and had stared blankly at the unfinished game of chess. The reality was simply too big to absorb at first, but then it had hit her hard and sideways, taking her off the track she’d known. She had hugged Mrs Elm so close, crying into her polo neck until her face was raw from the fusion of tears and acrylic.

Mrs Elm had held her, stroking and smoothing the back of her head like a baby, not offering platitudes or false comforts or anything other than concern. She remembered Mrs Elm’s voice telling her at the time: ‘Things will get better, Nora. It’s going to be all right.’

It was over an hour before Nora’s mother came to pick her up, her brother stoned and numb in the backseat. And Nora had sat in the front next to her mute, trembling mother, saying that she loved her, but hearing nothing back.

Mrs Elm smiled a very formal kind of smile. ‘A library, of course.’

‘It’s not the school library. And there’s no exit. Am I dead? Is this the afterlife?’

‘Then let me explain.’

As she spoke, Mrs Elm’s eyes came alive, twinkling like puddles in moonlight.

‘Between life and death there is a library,’ she said. ‘And within that library, the shelves go on for ever. Every book provides a chance to try another life you could have lived. To see how things would be different if you had made other choices . . . Would you have done anything different, if you had the chance undo your regrets?’

Mrs Elm shook her head. ‘No. Listen carefully. Between life and death.’ She gestured vaguely along aisle, towards the distance. ‘Death is outside.’

‘Well, I should go there. Because I want to die.’ Nora began walking.

But Mrs Elm shook her head. ‘That isn’t how death works.’

‘You don’t go to death. Death comes to you.’

Even death was something Nora couldn’t do properly, it seemed.

It was a familiar feeling. This feeling of being incomplete in just about every sense. An unfinished jigsaw of a human. Incomplete living and incomplete dying.

‘So why am I not dead? Why has death not come to me? I gave it an open invitation. I’d wanted to die. But here I am, still existing. I am still aware of things.’

‘Well, if it’s any comfort, you are very possibly about to die. People who pass by the library usually don’t stay long, one way or the other.’

‘While the Midnight Library stands, Nora, you will be preserved from death. Now, you have to decide how you want to live.’

From THE MIDNIGHT LIBRARY, by Matt Haig, published by Viking, an imprint of the Penguin Publishing Group, a division of Penguin Random House LLC. Copyright © 2020 by Matt Haig.