By Stephen Hubbard
Share —
Sign up for our newsletters to get GMA delivered to your inbox every morning!

Sunday night at the Country Music Hall of Fame's Medallion Ceremony, CMA and ACM female vocalist of the year Carly Pearce sang "Grandpa (Tell Me 'Bout the Good Ole Days)," as the country music family struggled with the death of the legendary Naomi Judd, just one day before her induction into the genre's most hallowed ranks.

"My mama loved you so much, and she appreciated your love for her. And I'm sorry that she couldn't hang on until today," Naomi's daughter, actress Ashley Judd, said through tears while accepting on her behalf.

"Your esteem for her and your regard for her really penetrated her heart and it was your affection for her that did keep her going in these last years," she continued.

Naomi died on Saturday after being "lost" to "the disease of mental illness," in the words of a statement put out by her daughters, Ashley and Wynonna.

Standing alongside her sister, Ashley pointed out that the induction equally honored her sibling, whom she called the GOAT, joking that she lived on a farm and didn't seem to realize it means "the greatest of all time," as Wynonna played along.

Wy herself kept The Judds' spunk going, admitting she hadn't prepared anything, expecting her mother to do most of the talking. The audience roared with laughter, knowing Naomi's irrepressible personality.

"My heart's broken and I feel so blessed, and it's a very strange dynamic, to be this broken and this blessed," Wynonna admitted, before revealing her mother's last moments. 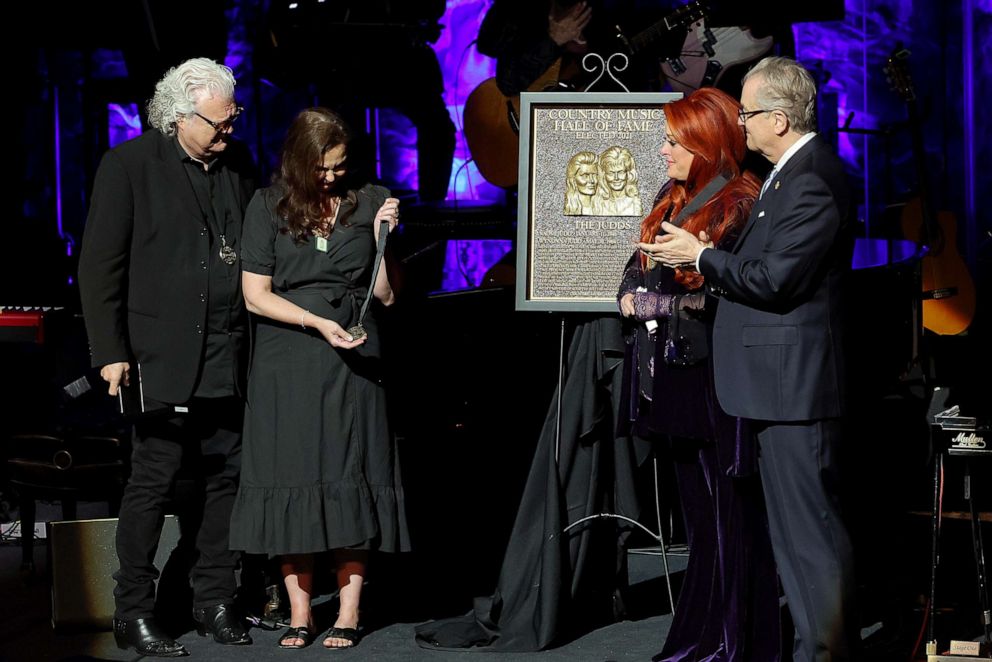 Terry Wyatt/Getty Images
Ashley Judd accepts induction on behalf of Naomi Judd with Ricky Skaggs, left, inductee Wynonna Judd onstage for the class of 2021 medallion ceremony at Country Music Hall of Fame and Museum on May 1, 2022 in Nashville, Tenn.

"This is the first time I've talked since saying goodbye to her," she went on. "At 2:20, I kissed her on the forehead, and I walked away ... the last thing we did together as a family with her is...we all gathered around her and we said 'The Lord is my shepherd...'" before continuing to recite the 23rd Psalm.

Fellow Kentuckian Ricky Skaggs presided over the Judds' official induction into the Hall of Fame.