As his family continues to negotiate his future, Prince Harry, the Duke of Sussex, stepped out Thursday for an official royal engagement.

Harry, 35, hosted the Rugby League World Cup 2021 draw at Buckingham Palace in his role as royal patron of the Rugby Football League, a patronage he's held since 2016, when he took it over from his grandmother, Queen Elizabeth.

The Duke of Sussex also on Thursday announced with the Rugby Football League a new initiative focused on mental health, a key focus of Harry's charitable work.

The event was the first time Harry has made an official royal appearance since delivering the bombshell news last week with his wife Meghan, the Duchess of Sussex, concerning their future roles with the royal family. 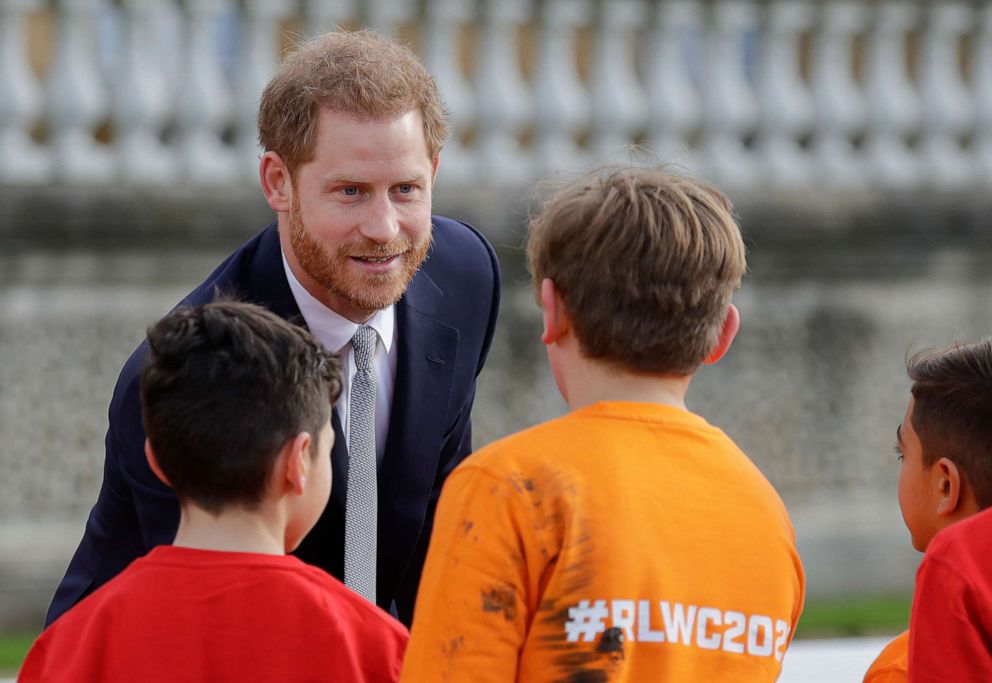 The parents of 8-month-old Archie announced in a statement shared via Instagram that they planned to "step back" from their roles as senior members of the royal family, become financially independent, split their time between the U.K. and North America, and launch a charitable entity.

Harry has been involved in discussions with his family since that Jan. 8 announcement about what exactly his and Meghan's futures will look like.

Meghan flew from the U.K. to Canada last week to reunite with Archie -- who stayed in Canada after the family's holiday vacation there -- while Harry stayed in the U.K. and participated in a family summit Monday with Queen Elizabeth, Prince Charles and Prince William.

(MORE: What we know about Prince Harry, Meghan's life in Canada)

It is expected that Harry will fly to Canada in the next week or so to reunite with Meghan and Archie.

Meghan was spotted for the first time since the announcement on Tuesday when she was photographed boarding a seaplane from Vancouver Island to Vancouver.

In Vancouver, she visited a women's shelter, the Downtown Eastside Women's Center, and Justice for GIrls, an organization focused on ending violence against girls and young women, according to its website.

Yesterday, The Duchess of Sussex, Meghan Markle visited to discuss climate justice for girls and the rights of Indigenous peoples. Was great to talk about the importance of a holistic approach to social justice, and the power of young women’s leadership. #DuchessOfSussex pic.twitter.com/M9LaqEELl7

Queen Elizabeth confirmed on Monday, after the family summit, that Harry and Meghan would begin a "period of transition" during which they will spend time in Canada and the U.K.

No further details have been released so far about the couple's future roles with the royal family.