Prince William and Kate, the Duchess of Cambridge, have shared with the public their 2021 Christmas card photo.

The photo shows William, Kate and their three children, Prince George, 8, Princess Charlotte, 6, and Prince Louis, 3, all smiling while on a trip to Jordan earlier this year.

The family is posing casually in the photo, with William, George and Louis wearing shorts and short-sleeve shirts and Kate and Charlotte each wearing a dress. 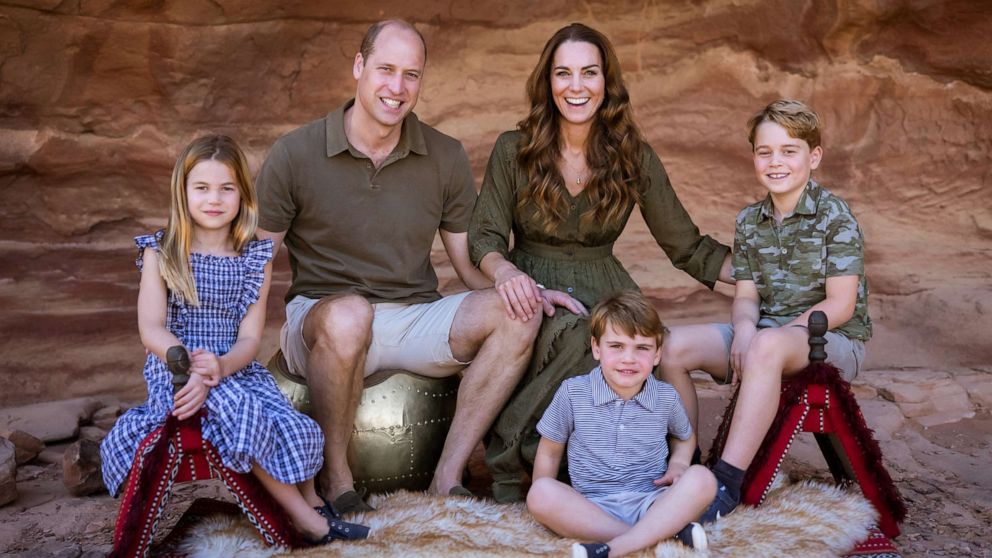 Kensington Palace via Reuters
A photograph featured on Their Royal Highnesses' Christmas card shows Britain's PrinceWilliam, Duke of Cambridge and Catherine, Duchess of Cambridge, with their three children Princess Charlotte, Prince Louis and Prince George, right, in Jordan earlier this year, in an image released on Dec. 10, 2021.

The photo was shared on William and Kate's Instagram page Friday with the caption, "Delighted to share a new image of the family, which features on this year’s Christmas card."

William and Kate have opted in recent years to use a more casual family photo for their annual Christmas card.

Their card last year featured the Cambridges sitting on haystacks and posing in front of stacks of firewood at Anmer Hall, the family's country home in Norfolk, England.

Their card the previous year featured the family posing outside on a motorcycle and sidecar.

The Cambridge Household family Christmas card this year features The Duke and Duchess of Cambridge with their three children, Prince Louis, Princess Charlotte and Prince George on a motorbike and sidecar ❄️🎄 pic.twitter.com/pNg3zPJXqS

In 2018, their first Christmas as a family of five, the Cambridges' holiday photo was another casual shot of them posing together outside at Anmer Hall.

In 2017, the Cambridges posed for a more formal family photo.

The Duke and Duchess of Cambridge are pleased to share a new photograph of their family. The image features on Their Royal Highnesses' Christmas card this year. The photograph was taken earlier this year by @ChrisJack_Getty at Kensington Palace. pic.twitter.com/p8jm6zDfl0

— The Duke and Duchess of Cambridge (@KensingtonRoyal) December 18, 2017

The previous year, William and Kate chose a candid photo from their official tour of Canada for their Christmas greetings.

The Cambridges shared their first Christmas photo as a family of four in 2015, when they posed outside of Kensington Palace.

The palace has not yet publicly announced where William and Kate and their children plan to spend the Christmas holiday this year.

In past years the Cambridges have joined the royal family in spending Christmas at Sandringham, Queen Elizabeth's estate in Norfolk.

The royals were forced to break that decades-long tradition last year due to the coronavirus pandemic.

This Christmas will be the royal family's first without Prince Philip, who died at age 99 in April.