Princess Beatrice wore something old and borrowed on her wedding day.

The eldest daughter of Prince Andrew and Sarah Ferguson wore a vintage dress by Norman Hartnell on loan from her grandmother, Queen Elizabeth II.

She also wore the same tiara, the Queen Mary diamond fringe tiara, the queen wore on her wedding day in 1947, according to Buckingham Palace.

Princess Beatrice wore a vintage dress by Norman Hartnell and the Queen Mary diamond fringe tiara, both belonging to Her Majesty The Queen.

The tiara was worn by Her Majesty on her wedding day in 1947. pic.twitter.com/LEXLdsSlW1

Beatrice, whose plan for a large royal wedding was canceled due to the coronavirus pandemic, wed Edoardo Mapelli Mozzi on Friday morning at the Royal Chapel of All Saints at Royal Lodge, Windsor.

Her Royal Highness Princess Beatrice of York and Mr. Mapelli Mozzi have been touched by the warm wishes they have received since their wedding, and are delighted to share two additional photographs of their happy day. #RoyalWedding pic.twitter.com/3OKPHdWrH2

The small ceremony was attended by Beatrice's grandparents, Queen Elizabeth and Prince Philip, and "close family," including the couple's parents and siblings. Mapelli Mozzi's son, Wolfie, was both best man and pageboy at the wedding, according to the palace.

None of the photos released of Beatrice and Mozzi on their wedding day included Beatrice's parents. 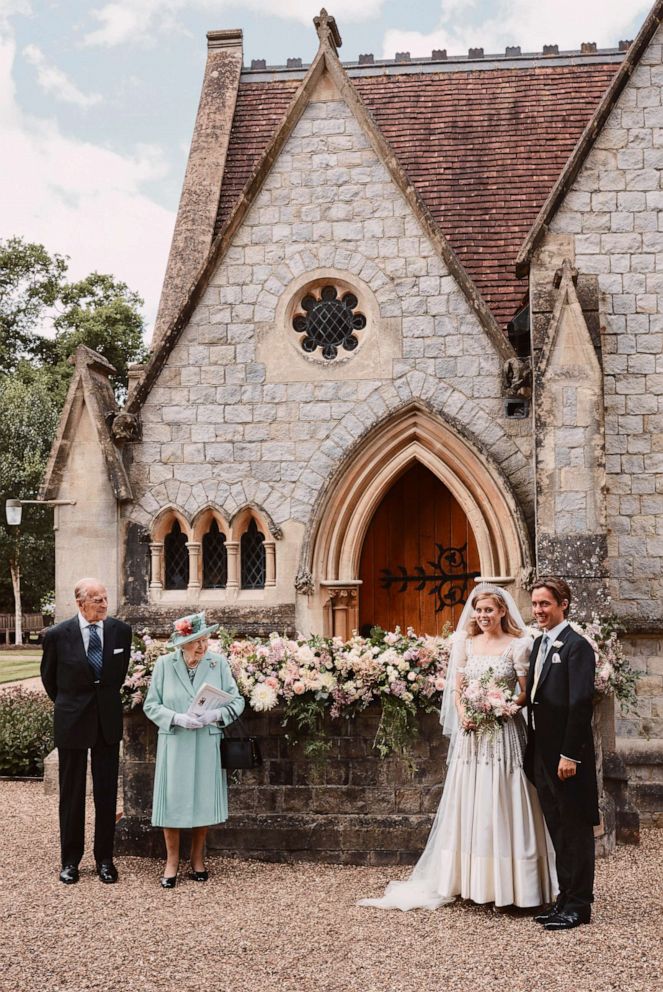 Pool/Reuters
Princess Beatrice and Edoardo Mapelli Mozzi stand outside The Royal Chapel of All Saints at Royal Lodge Queen Elizabeth II and Duke of Edinburgh.

Her father, Prince Andrew, walked her down the aisle, according to Buckingham Palace. He continues to face intense scrutiny over his relationship with convicted sex offender Jeffrey Epstein, who died in prison from an apparent suicide last year.

Andrew announced last November he would step back from public duties "for the foreseeable future" amid heavy criticism.

Friday's wedding, which Buckingham Palace said "took place in accordance with all relevant Government Guidelines," was a much different affair than was originally planned by Beatrice and Mozzi, who was described by the BBC as a "property tycoon."

The couple, who got engaged last year in Italy, planned to wed on May 29 at the Chapel Royal at St. James's Palace in London, where Prince George, the son of Beatrice's cousin Prince William and his wife, Kate, was baptized in 2013. 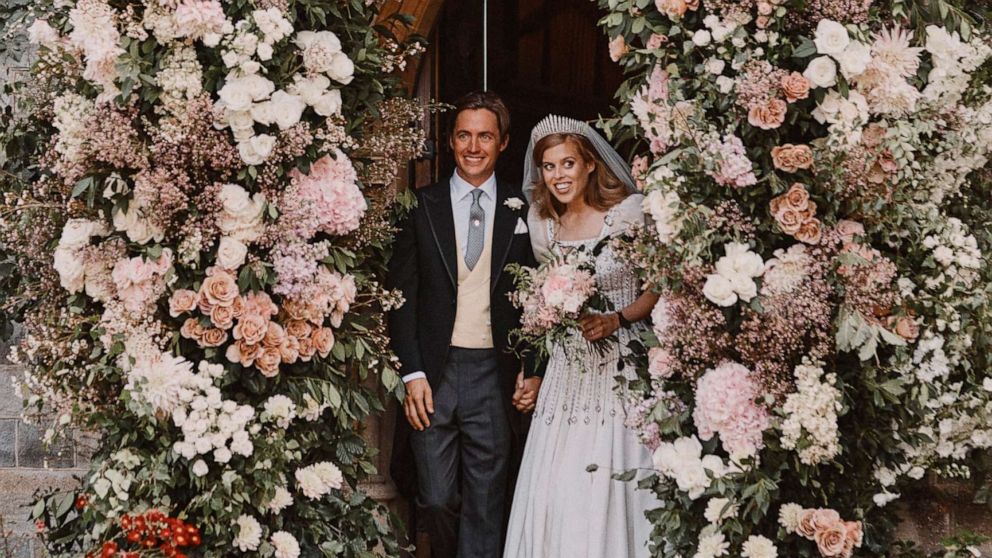 Pool/Reuters
Princess Beatrice and Edoardo Mapelli Mozzi leave The Royal Chapel of All Saints at Royal Lodge after their wedding, in Windsor, Britain.

A private reception hosted by Queen Elizabeth was to follow the ceremony at Buckingham Palace's gardens.

MORE: Changing of the Guard postponed at UK palaces due to coronavirus

Beatrice's mom, Ferguson, took to social media on May 29 to mark what would have been her daughter's wedding day.

"Love you my darling Beatrice," Ferguson wrote on Instagram and Twitter, alongside a throwback photo of a young Beatrice. "You have given me more joy than I could ever wish for. I am so excited to celebrate yours and Edo's love when we all are out of lockdown."

"The most important thing is health and love and today I send it to you and all the other people that were getting married during this time .. so proud of you all," she wrote.