The veteran known as Captain Tom who raised tens of millions of dollars for the British National Health Service during the coronavirus pandemic received a knighthood Friday from Queen Elizabeth.

Capt. Sir Thomas Moore received the honor during a ceremony at Windsor Castle that marked the first investiture the 94-year-old queen has taken part in since she began following strict stay-at-home orders in March during the pandemic.

Measures were put in place to ensure that both the queen and Moore -- considered particularly vulnerable to the virus due to their ages -- were kept safe during the ceremony. 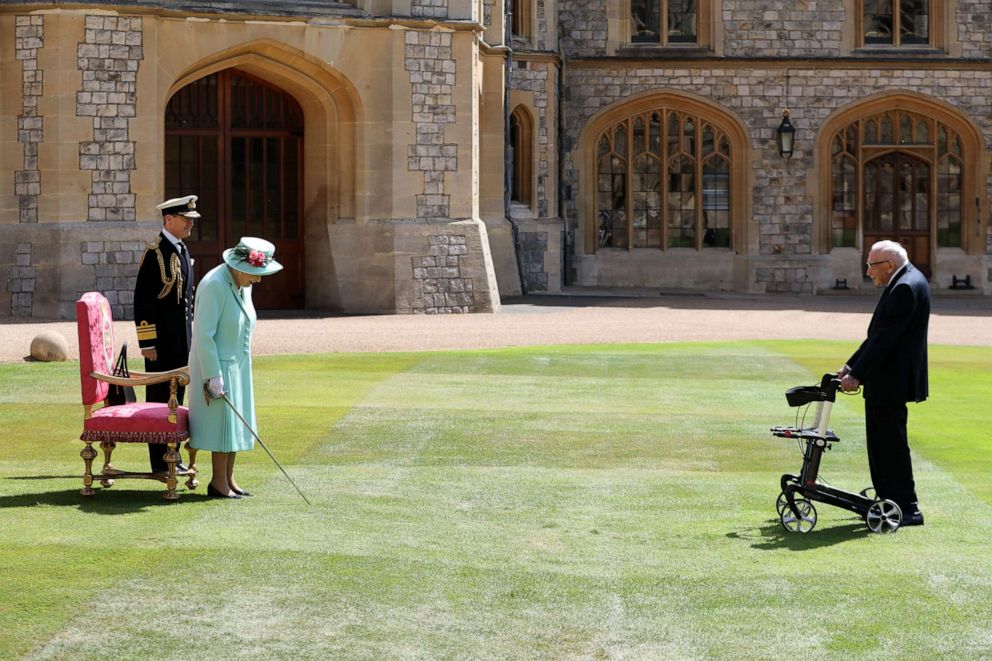 Moore met the queen outdoors in Windsor Castle’s Quadrangle, accompanied by his family for the special occasion.

Queen Elizabeth used the sword that belonged to her father, George VI, to tap Moore on his shoulders. 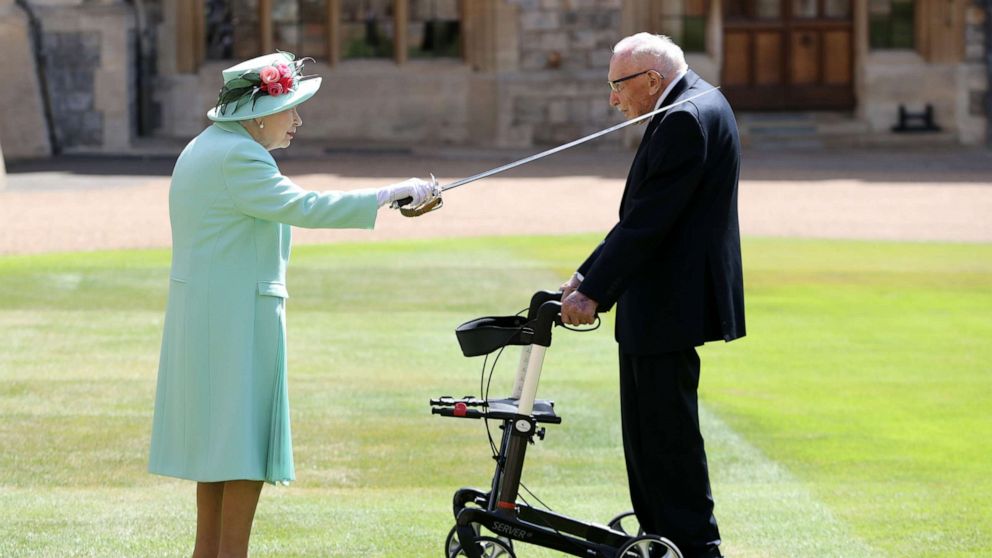 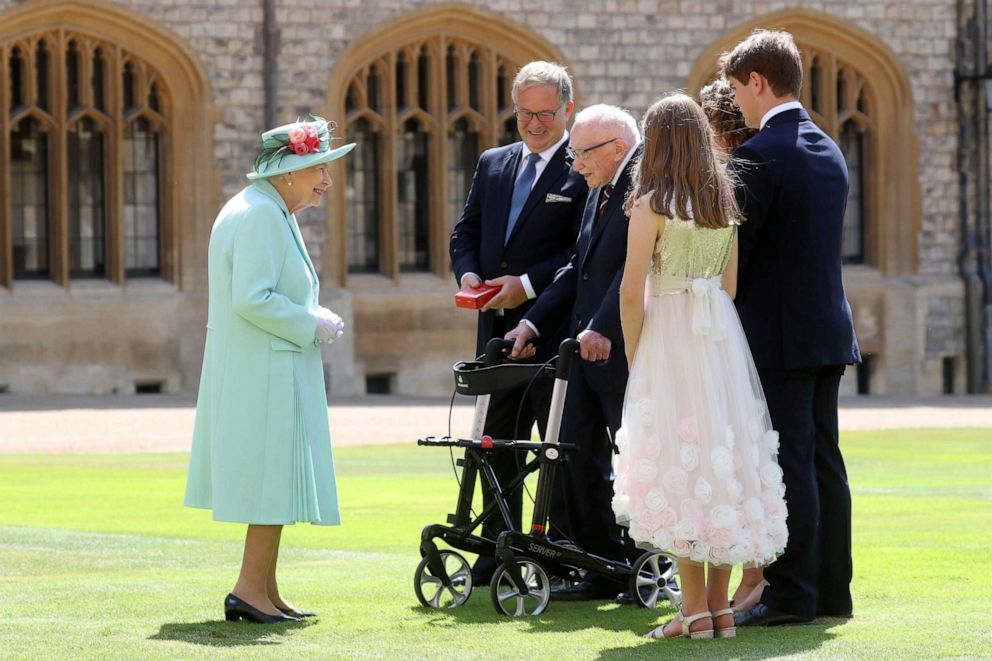 Chris Jackson/AP
Queen Elizabeth talks with Captain Sir Thomas Moore and his family after awarding his knighthood during a ceremony at Windsor Castle in Windsor, England, July 17, 2020. 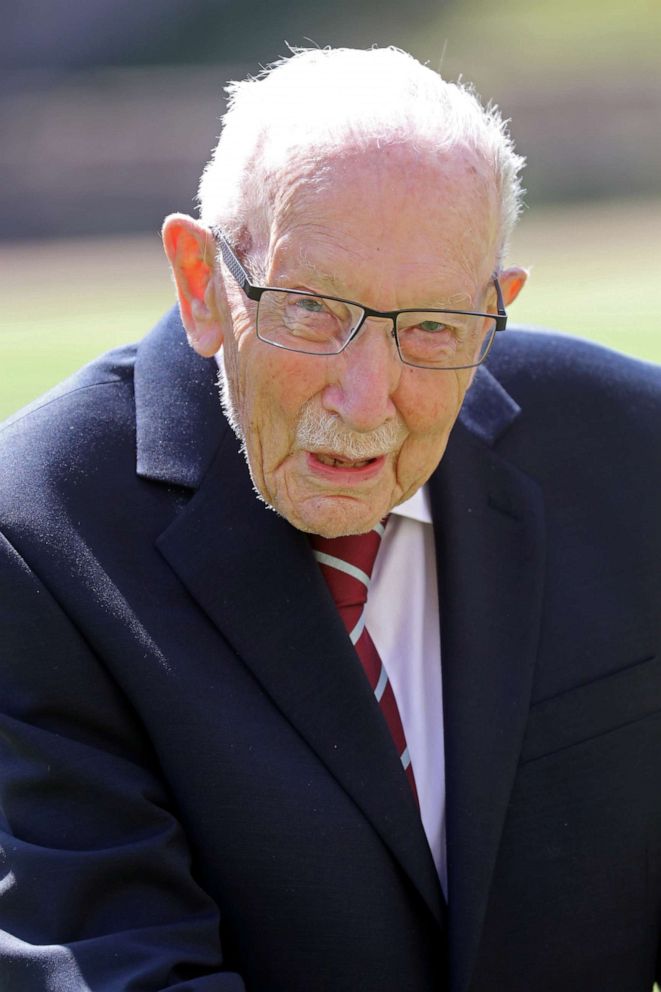 Chris Jackson/Reuters
Captain Tom Moore poses after being awarded with the insignia of Knight Bachelor by Britain's Queen Elizabeth at Windsor Castle, in Windsor, Britain July 17, 2020.

Moore tweeted his excitement Friday morning before the ceremony, writing, "Good Morning! Ready and raring to go for what is a very special day. Thank you for all the well wishes, as ever, overwhelmed by your support."

Good Morning! Ready and raring to go for what is a very special day. Thank you for all the well wishes, as ever, overwhelmed by your support.#todaywillbeagoodday pic.twitter.com/JgLD0O0suI

Moore gained international fame in April when he raised over $37 million for front-line National Health Service workers in the U.K.

Moore originally aimed to raise $1,000 for charity by walking laps in his garden while under lockdown in Buckinghamshire, England. He hoped to complete 100 laps before he turned 100 in late April.

Happy 72nd Birthday @NHS
Thank you for all that you do for us 💙👏 #ThankYouTogether #NHSBirthday#TomorrowWillBeAGoodDay pic.twitter.com/gYGVmXe7jp

Moore's online campaign exploded and by the time he reached his 100th birthday on April 30, the World War II veteran had raised tens of millions of dollars.

Moore also received a promotion from Queen Elizabeth to the rank of colonel and a special flyover to commemorate his achievements.

Just received a rather special birthday card from Her Majesty The Queen @RoyalFamily pic.twitter.com/jqIxpVFBRH

Friday marked a busy day for Queen Elizabeth, who attended the wedding of her granddaughter, Princess Beatrice, on the grounds of Windsor Castle before leading the investiture ceremony for Moore.