The veteran known as "Captain Tom," who raised tens of millions of dollars for the British National Health Service, turned 100 Thursday, receiving a promotion from the Queen to the rank of "Colonel" and a special flyover to commemorate his achievements.

Earlier this month, Captain Tom Moore, who fought in WW2, captured the nation's hearts by launching a fundraising event by walking around his back garden to thank doctors who treated him for cancer. Moore originally aimed to raise £1,000 for charity, but his online campaign, set up just last week, has exploded -- he's received donations from hundreds of thousands of people. 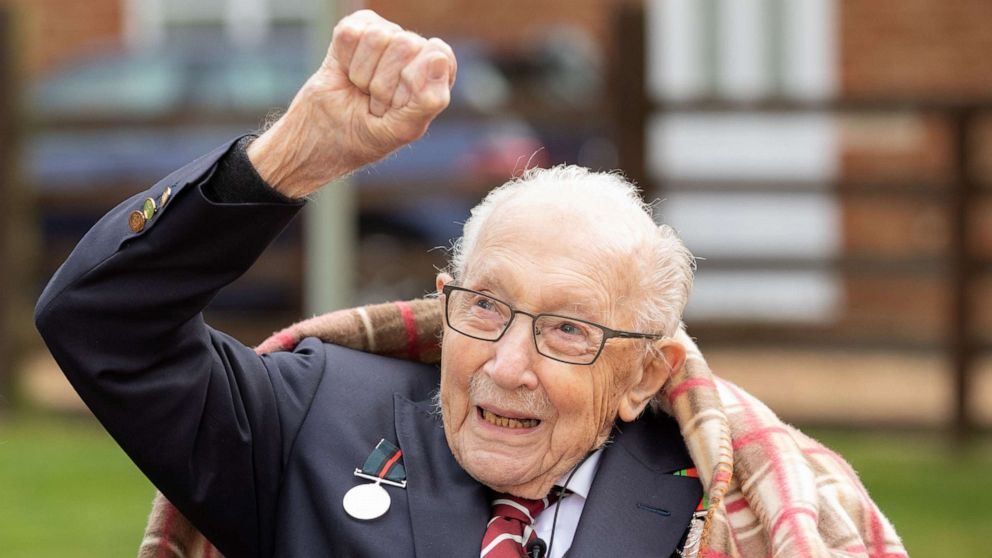 Emma Sohl/CAPTURE THE LIGHT/AFP via Getty
A handout picture released on April 30, 2020 shows Captain Tom Moore waving at a flypast by Battle of Britain Memorial planes to celebrate his 100th birthday in Marston Moretaine.

"100 years young today," Captain Tom posted on Twitter. "Looking forward to a day of celebration with the family. Today will be a good day!"

Spitfire planes from the Royal Air Force performed a spectacular flyover over the veteran's house to mark the occasion.

"This event has been amazing for us, helping us get through the lockdown," Benjie Ingram-Moore, Captain Tom's grandson told ABC News earlier this month. "My parents have 20,000 emails to reply to -- we haven't been off our laptops!"

The U.K. Prime Minister Boris Johnson issued a special statement to thank Captain Tom and wish him a happy birthday.

"Your heroic efforts have lifted the spirits of the entire nation," Johnson said. "You've created a channel to enable millions to say a heart-felt thank you to the remarkable men and women in our NHS."

He also received a birthday message from the Royal Opera House.

🎂 ❤️ A special message for @captaintommoore on his 100th birthday!

With lots of love from the Orchestra and Chorus of the Royal Opera House#OurHouseToYourHouse pic.twitter.com/wXOTQVA49H

Captain Tom's promotion to Honorary Colonel was approved by Queen Elizabeth II and he received a personal letter from Her Majesty, which the veteran described as "rather special."

Just received a rather special birthday card from Her Majesty The Queen @RoyalFamily pic.twitter.com/jqIxpVFBRH

"I'm delighted that Capt Tom Moore has agreed to be Honorary Colonel of AFC Harrogate where our youngest soldiers are trained & educated," the British Army's Chief of Staff said. "He is an inspiration & role-model to generations and this deserved promotion is applauded across all ranks. Happy 100th Birthday Colonel Tom."