"If he doesn't get an Oscar for this, I will eat my own foot."

That's not me talking. Those words come from Elvis Presley's daughter Lisa Marie Presley in reference to Austin Butler, the electrifying new star who plays her father in Baz Luhrmann’s bejeweled battering ram of a biopic, "Elvis," out in theaters this week.

Butler also has Presley’s ex-wife Priscilla in his corner. If you suspect all this family support means Luhrmann’s impressionistic, pop-cultural opera isn’t telling the whole truth and nothing but about the rock legend, who died at 42 in 1977 but still reigns as King -- you’d be right.

Even at two hours and 39 minutes, "Elvis" never seems to probe deep enough into the heart one of the greatest performers of the 20th century. But Luhrmann, the visual virtuoso of "Romeo+Juliet," "Moulin Rouge" and "The Great Gatsby," never misses a chance to wow us with sights and sounds that would have appealed to Elvis' own flamboyant sense of showmanship.

Nothing puts Butler in the shade, not even the glittering brilliance of the costumes and production design by Catherine Martin, Luhrmann's wife. He does his own singing as the young Elvis with his voice later blended with that of the real Elvis. Butler, 30, who started out in TV ("The Carrie Diaries") and on the periphery of Quentin Tarantino's "Once Upon a Time in Hollywood," seizes the role of his career in "Elvis" and rides it to glory.

Butler also shares the screen with another legend, Tom Hanks, who plays Colonel Tom Parker, the malevolent manager who devoted his life to controlling his most famous client and took half of his earnings in the process. "We are the same, you and I," Parker drawls, at one point in the movie. "We are two odd, lonely children, reaching for eternity."

Parker, who was born Andreas Cornelis van Kuijk, was a former carnival barker who entered the U.S. from the Netherlands unlawfully and kept Elvis from touring overseas out of fear his own past would be uncovered. Hanks, in a fat suit, facial padding and an accent Parker tried to pass off as Southern, gives his all to a role that the script sadly fails to develop.

There is some effort made to show how Elvis culturally appropriated the Black roots music that inspired him growing up in Tupelo and Memphis, Tennessee. And Luhrmann pushes hard -- his default mode -- for contemporary relevance by mixing Elvis hits with rap, hip-hop, country and dance beats. 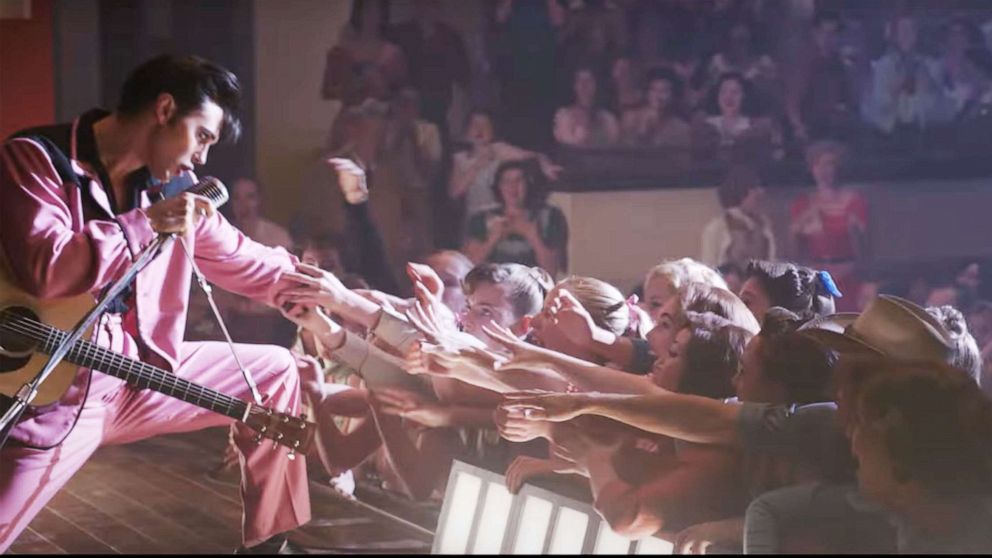 Elvis ignited a cultural rebellion fired by his hip-swiveling gyrations to the devil’s music -- so labeled by the fundamentalist Christians at that time -- that inflamed teen girls and a lot of boys. "The way you sing is God-given," mama Presley, Helen Thomson, says in once scene, "so there can’t be nothin' wrong with it." Moral watchdogs disagreed.

Parker quickly tries to defuse public outrage by having Elvis cut his hair, join the Army and appear in family-friendly movies. It's not until a 1968 TV comeback special that a leather-clad Elvis rebels against the Colonel by bringing his political passion, incited by the assassinations of Robert Kennedy and Martin Luther King Jr., into his music ("If I Can Dream").

The singer's physical decline, worsened by pills he used to get through Vegas engagements arranged to pay Parker's gambling debts, is conveyed to devastating effect by Butler. What a shame, then, that the movie's emphasis on Parker cheats us of the time Elvis spent with Priscilla (an underused Olivia DeJonge). "I never made a classic film I could be proud of," Elvis tells her.

Maybe so. With the exception of 1964’s vibrant "Viva Las Vegas," Elvis' 33 films are trifles. Still, you can see his latent acting talent in "King Creole," "Jailhouse Rock" and "Flaming Star." And Butler, a real-deal actor, makes that untapped potential palpable as he catches Elvis in the exhilarating act of inventing himself before being caught in the trap of his own celebrity.

Though Luhrmann's "Elvis" looks unlikely to achieve classic status as a film -- it keeps tripping on its own excess and the intrusion of the Colonel -- Butler does Elvis proud with the grit and grace of his performance. A star is born in Butler. Like Elvis, you can's take your eyes off him.