What a title! And what a movie! “Everything Everywhere All at Once,” probably the best 2022 movie you’ve never heard of, has been racking up $50 million at the box office—a rare jackpot for an indie film—on its way to a digital streaming debut this week.

Drop everything and see it. Reduce the plot to a sentence and it’s about a Chinese-American wife, mother and laundromat owner (a wow Michelle Yeoh) being audited by the IRS. Don’t yawn. In minutes, writer-directors Daniel Kwan and Daniel Scheinert, collectively known as the Daniels, blast off into an absurdist comedy orbit that practically defies you to hang on. 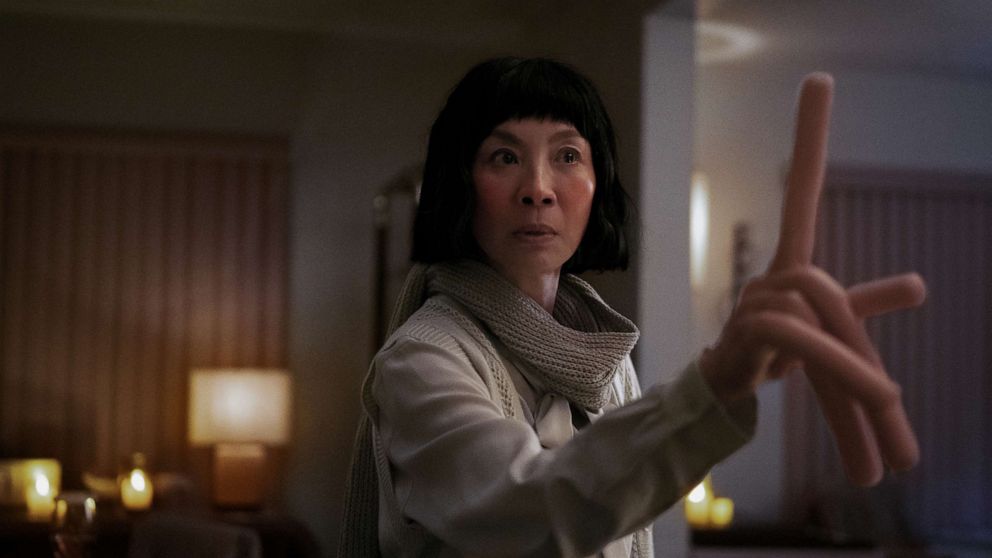 A24
A scene from "Everything Everywhere All At Once."

Life is a stress magnet for Yeoh’s Evelyn Wang. She argues with her husband Waymond (Ke Huy Quan) about how to run their laundromat and deal with live-in grandfather Gong Gong (James Hong), argues with her daughter Joy (Stephanie Hsu) who’s come out as gay, and argues with Deirdre Beaubeirdra (a killer funny Jamie Lee Curtis) who’s auditing their business.

In the face of all that racket, the Daniels quickly slide their surreal movie into science fiction where Evelyn must cope with a multiverse that would intimidate Spider-Man and Doctor Strange combined. Suddenly, Evelyn is thrust into alternative realms as a chef, a singer and an action star much like Yeoh herself in “Crouching Tiger, Hidden Dragon.”

Just go with a frenetic flow that the Daniels turn into two hours of explosive visual pow. Still, it’s the emotions running under the action that raise the bar on the fireworks. You feel for Evelyn. If you didn’t there’d be no movie to awaken dreams and nightmares.

Yeoh, pushing 60 and still doing her own stunts, is a one-woman parade of wonders. She can act with nuance and feeling (see "Crazy Rich Asians”), but the role of Evelyn turns her into a whirling dervish who zips between realms that leave her and us breathless with excitement. Adam Sandler had it easier in ”Uncut Gems” and that’s saying something.

High praise as well to Quan who quit movies after childhood triumphs as Short Round in “Indiana Jones and the Temple of Doom” and as Data in “The Goonies.” His heartfelt portrayal of Waymond’s humor and heart shows us how much we’ve missed him on screen. 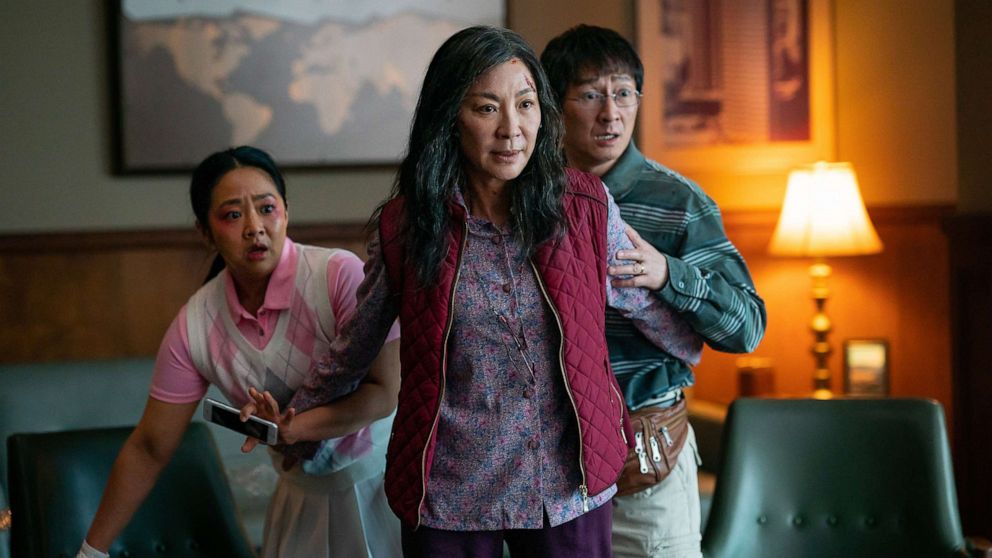 A24
A scene from "Everything Everywhere All At Once."

What is this movie saying exactly in the rare moments when it stops zipping through a culture of nihilism to pause for reflection? That running a dysfunctional family is no job for wussies. And that flashes of lives that might have been are no match for the life we’re actually living.

If you saw “Swiss Army Men,” the Daniels 2016 debut feature that starred Daniel Radcliffe as a corpse with a flatulence problem, you know this pair isn’t about to tell you what and how to think. You may feel pummeled and exhausted before this ride ends. But you’ll never be bored.

“Everything Everywhere All at Once” is a volcano of creative ideas in full eruption. You may feel whiplash after the Daniels put you through their paces. But it’s no wonder why the film has touched a deep chord with audiences. In a world of nonstop stimuli, the impulse to connect on a human level may just be our salvation. “Everything” is like nothing you’ve ever seen.