"Lights up on Washington Heights!"

With that wake-up call from the estupendo film version of Lin-Manuel Miranda's Tony-winning 2008 Broadway musical, "the one before "Hamilton," this cinematic jolt of pure unleashed joy grabs you and never lets go. And it gets better the more times you see it. 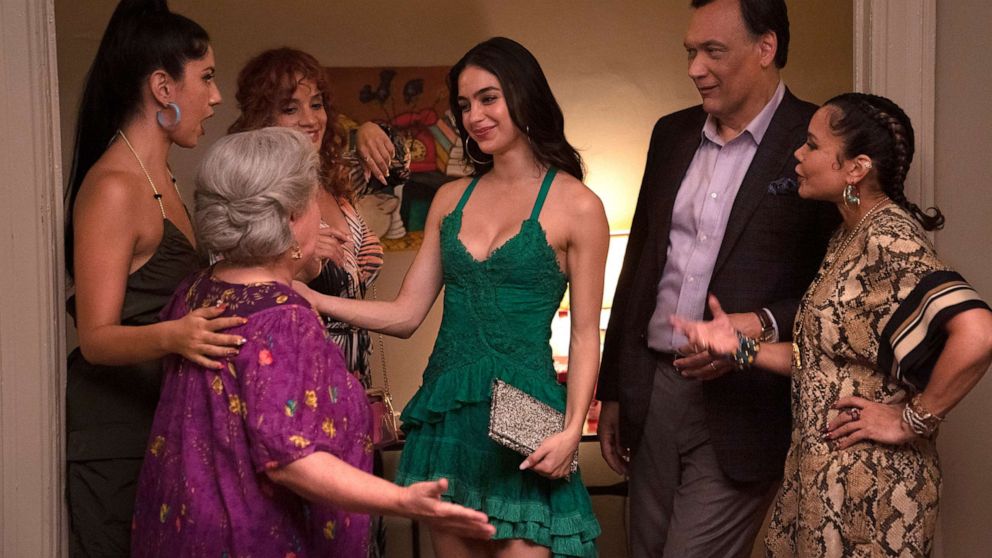 Warner Bros.
From left, Stephanie Beatriz as Carla, Olga Merediz as Abuela Claudia, Dascha Polanco as Cuca, Melissa Barrera as Vanessa, Jimmy Smits as Kevin Rosario and Daphne Rubin-Vega as Daniela, in the film, "In the Heights."

If any movie can tempt pandemic-weary audiences back to the multiplex for a dance in the aisles, it'll be "In the Heights." Now in theaters and on HBO Max, this surefire Oscar contender emerges as the best and most beguiling movie of the summer and maybe the year.

Set to Miranda's Latin, salsa, meringue and hip-hop beats, the plot pivots on the bustling barrio of New York's Washington Heights where immigrants dream their own dream of what defines home. On stage, Miranda starred as Usnavi, the bodega owner from 181st Street -- the George Washington Bridge always in sight -- who longs to return to his roots in the Dominican Republic.

Here Miranda excels in a bravo-worthy cameo as Piraqua Guy, pushing a cart to sell shaved ice during a July heatwave. Miranda, 41, ceded the iconic role of twenty-ish Usnavi to Anthony Ramos, who played his son in "Hamilton." Ramos shines in a bust-out star performance and leads a cast of singer-dancer-actors that can only be described as sheer perfection.

The musical numbers range from ravishing ballads ("Just Breathe") to bawdy fun at a beauty salon ("No Me Diga") and an eye-popping Busby Berkeley-inspired water ballet at Highbridge Pool (the film was shot on location) in which everyone swims in unison while fantasizing how'd they splurge if they'd bought the winning $96,000 lottery ticket just sold at Usnavi's bodega. 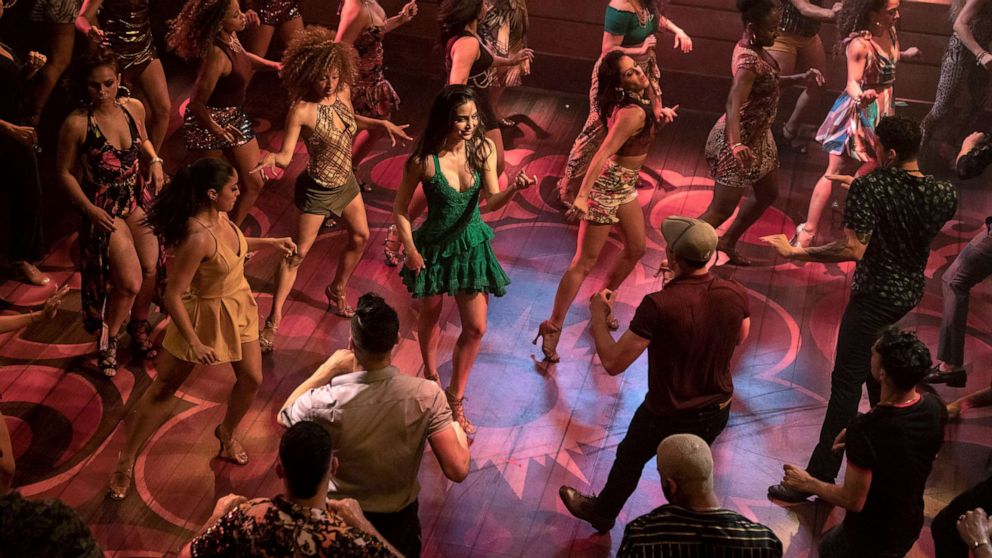 Warner Bros.
Melissa Barrera, center, plays Vanessa in the movie, "In the Heights."

Directed in a blaze of creativity by Jon M. Chu ("Crazy Rich Asians"), "In the Heights" juggles a handful of vignettes from writer Quiara Alegria Hudes about a marginalized neighborhood feeling the tensions of gentrification. As Usnavi freestyle raps in the showstopping title song: "And ever since the rents went up/It's gotten mad expensive, but we live with just enough."

Usnavi hopes his move to the DR will include his surrogate Cuban grandma Abuela Claudia -- Olga Merediz repeating her stage role with a grit and grace that should make her an awards favorite, along with livewire Gregory Diaz IV as Sonny, Usnavi's undocumented, teen cousin.

MORE: 'Loki' review: Tom Hiddleston is back in the role he was born to play

The updated script speaks tellingly to the U.S.' Deferred Action for Child Arrivals policy and immigrant rights. But not to drugs and violence. Miranda, of Puerto Rican descent, is resistant to media representation of Latinos and crime. Having acted in his sixth grade production of "West Side Story," Miranda felt heartsick that "we still had knives in our hands and we were still gang members."

So "In the Heights" is both corrective and a way for Miranda to stay true to life as he lived it. Racial pressures, family expectations and social mobility all play a part. Usnavi must leave behind his longtime love Vanessa (Melissa Barrera), who wants to make it in American fashion. 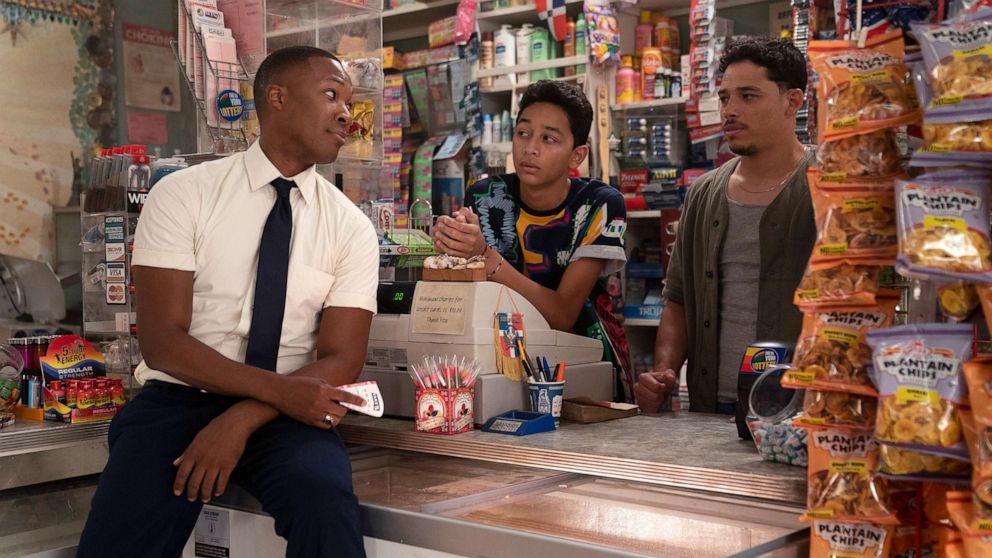 Warner Bros.
From left, Corey Hawkins as Benny, Gregory Diaz Iv as Sonny and Anthony Ramos as Usnavi, in the film, "In The Heights."

There is also racial anxiety for homegirl Nina (Leslie Grace), not just in her relationship with Benny (Corey Hawkins, superb) the Black dispatch worker at the cab service owned by her father Kevin (a sublime Jimmy Smits), but in the bigotry that forced her to drop out of Stanford.

Nina and Benny sing a lilting fire-escape duet ("When the Sun Goes Down") in which they defy gravity by dancing up, down and over constricting building walls. Gorgeously staged by Cho and "So You Think You Can Dance" choreographer Christopher Scott, the number is breathtaking in its beauty and stinging relevance.

That's the thing about "In the Heights" -- it can move with insinuating skill from intimate to epic, as in "Carnaval del Barrio," an exultation of community unity performed during a power outage. Rest assured that the power never goes out in this explosion of music and motion.

Even when the plot strands don't always cohere, the feelings push through thrillingly. "We're home," chants Usnavi in a euphoric finale that illuminates the stories of the people in the street, whether their endings are happy or bittersweet. "In the Heights" has something rare in any art form: a heart that sings and a spirit that soars.