The singer, an outspoken advocate for mental health causes, announced the platform with Teefey and Pierson in November. The space is described as an "inclusive, fun, and easy place where people could come together to explore, discuss, and navigate their feelings."

In a new interview with ABC News' Juju Chang that aired on "Good Morning America" Monday, the trio spoke about their goals with the platform and how their respective mental health journeys led them to creating this concept.

"Wondermind is not just for people who have a diagnosed mental illness -- this is for anyone who has feelings," Pierson said. "It's for anyone who ever feels sad, lonely, scared, anxious and we're really not labeling anybody." 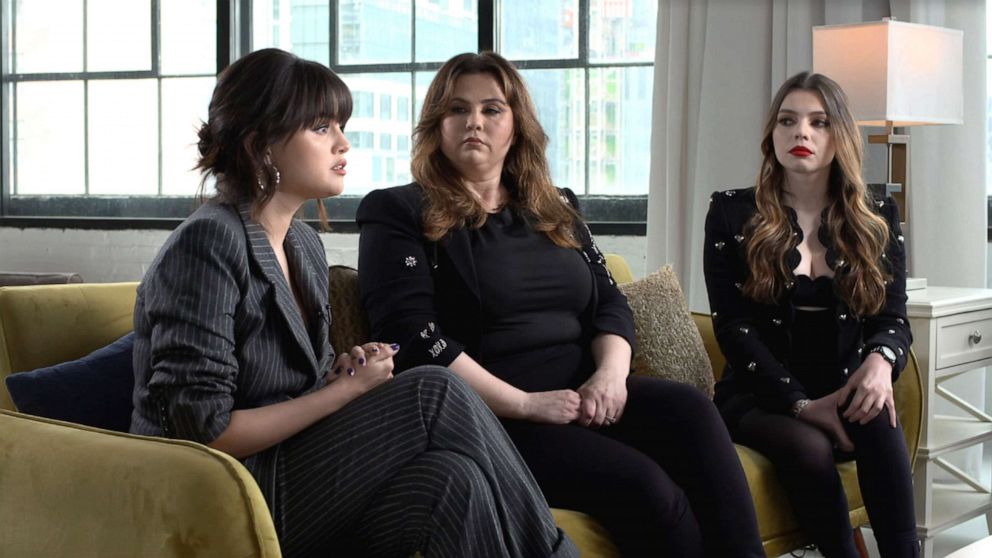 ABC News
Selena Gomez, Mandy Teefey and Daniella Pierson are guests on ABC's "Good Morning America" on April 4, 2022. Gomez and her team are launching a new multimedia endeavor called Wondermind, which is focused on mental health.

The platform will offer resources, including daily content, tools and exercises that will allow subscribers to navigate resources for improving one's mental health. Pierson said that all of the platform's content is "vetted by an expert committee of the world's best psychiatrists, therapists and social workers with incredibly diverse backgrounds" to ensure they are responsible in what resources they are promoting.

"There are places where people go when they need help, and it's unfortunate that they cost ridiculous amounts of money," Gomez, 29, said. "But [as with] Planned Parenthood, there's a place for women to feel okay and to feel understood, and I want that for mental health. I think it's so important and I can't stress it enough how much I care and how much I really, really want people to be understood, seen and heard."

Pierson said the platform is "not a replacement for a therapist."

"If you work on your body and your physical health, and that's so important, why isn't your mental health just as important?" Pierson said. "You have to do the work in between -- any good therapist will tell you the same thing ... we are creating an ecosystem where people feel like in between therapy sessions, if they're lucky enough to see a therapist, they can work on their mental fitness."

"But we're also creating these resources and amplifying these incredible professionals that do charge thousands of dollars an hour, and being able to bring their information to the masses -- to the people who can't afford that -- so that's really the democratizing part," she added.

Gomez, who has been candid about facing depression and anxiety struggles, first publicly revealed her bipolar diagnosis in 2020.

The singer said that learning more about her health diagnoses had a positive impact in her life. "I just found that it was really freeing to have the information, to kind of know what's going on," she said. "It didn't scare me."

"I started to have a relationship with myself, and I think that's the best part," she continued. "I've probably been the happiest I've ever been. My mom knows. And it's just been really wonderful, but it's work and you do it every day." 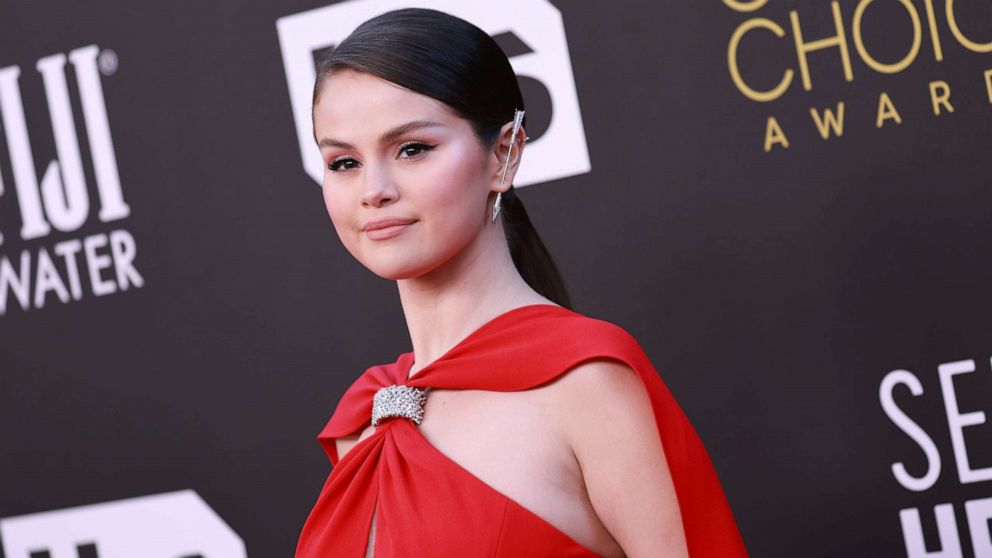 Teefey said she too was diagnosed as bipolar but later found that she was misdiagnosed; she said she later was diagnosed with attention deficit hyperactivity disorder.

"I overconsume everything, but I think that's the beauty of embracing what is going on with you because you can start using it as a superpower, or you know, another trait that's just beautiful about yourself," Teefey said. "Now I realize my ADHD has me thinking outside of the box ... there's a comfort in kind of knowing what's going on with your body."

Pierson, 26, said she was diagnosed with obsessive-compulsive disorder when she was 21 and that she kept that diagnosis private for years. "I would have rather not been on this earth than anybody know I had OCD," she said. "That was how much it plagued me."

Wondermind will help "normalize talking about these mental illnesses that maybe people thought they knew about, but they actually manifest in different ways in different people," Pierson said.

How they are putting their own 'mental fitness' exercises into practice

Gomez said she does "necessary things" to support her mental health: "I see a therapist, and I actually have tons of books and little cards. ... I have tons of workbooks, like a nerd, but I love DBT, so dialectical behavior therapy is something I'm really passionate about. I have notebooks that kind of help me do that. I write music, I try to take what's going on and turn it into something beautiful in the best way that I can."

DBT is a type of psychotherapy that "uses a skills-based approach to teach you how to manage your emotions, tolerate distress and improve relationships," according to the Mayo Clinic.

Gomez said she also loves creating "rare reminders" -- sticky notes that contain positive messages, that she said she leaves around her home.

"It could be quotes, it can be something that I need to validate my feelings with -- maybe something along the lines of, 'Today you are enough,'" Gomez said. "And I'll put it visually somewhere, and I'll keep it there until that's in my mind."

"But the funny thing about it is it's actually one of the DBT exercises, and it is really amazing to see that people don't realize that they're doing something that is actually benefiting them," she added.

A post shared by Rare Beauty by Selena Gomez (@rarebeauty)

Pierson said Gomez's self-help practices, like the notes, helped influence what exercises they set out to provide to the platform's subscribers.

Gomez also said how powerful music is for her as an emotional outlet. "When I have moments in a studio and create something from a place of, I don't know, happiness, or sadness or grieving something, it's such a safe place for me," she said. "It's so cool. To me, I love the idea of coming together and having essentially a therapy session."

The "Rare" artist also has notably stepped away from social media, despite having more than 300 million followers on Instagram.

"I haven't been on the internet in 4 1/2 years," Gomez said. "It has changed my life completely. I am happier, I am more present, I connect more with people. I understand how powerful the internet is, and in so many ways it's done the best things for the world. But for me, I get to my news that is actually important I get through people in my life."

"And everything else I could care less, because it's not my business to care about people's other business," she added.

Gomez, an actor and award-winning artist, emphasized the importance of having a purpose in her life, with her mental health advocacy efforts at the forefront.

"I honestly don't think I should be sitting here if I didn't have a purpose. ... This life in a way kind of chose me, and I continue to choose it," she said. "I just know that if I'm here and I'm doing something, let it matter."

She also said that although she is a proponent for raising mental health awareness, she still often struggles with it herself. 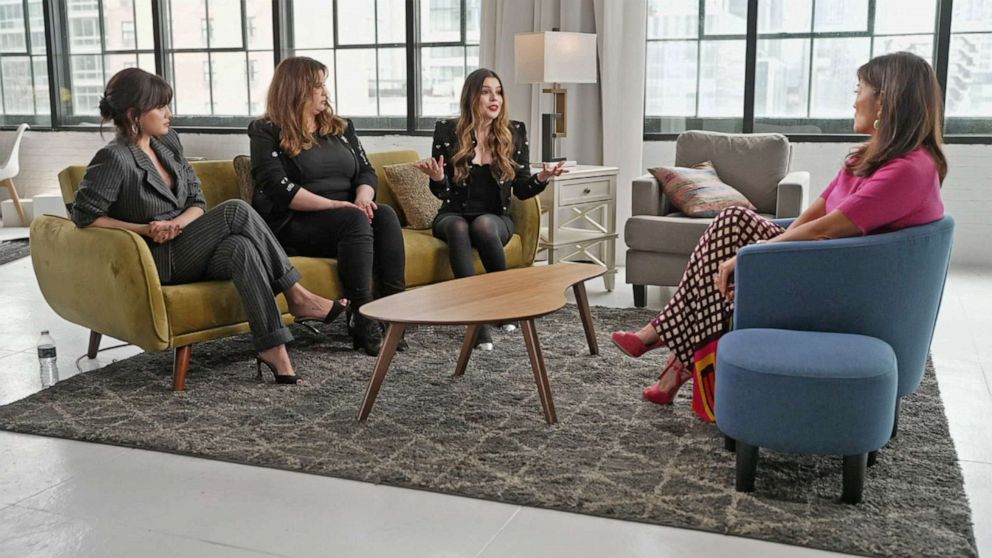 ABC News
Selena Gomez, Mandy Teefey and Daniella Pierson are guests on ABC's "Good Morning America" on April 4, 2022. Gomez and her team are launching a new multimedia endeavor called Wondermind, which is focused on mental health.

"I understand that feeling of having no one and -- it's pure -- it's just sadness -- and I know what that feels like," she said. "And I still have days where sometimes I feel like that. It's just unfortunately part of it."

"But that's what we're trying to do here," she said of Wondermind. "We want there to be a community and a space for people to feel like they're OK -- that they're not alone."

The singer also said that besides her family, she believes "understanding" her mental health is the "most important thing in the world" to her. She wants to extend that level of prioritization of one's mind to others through the new platform.

"If I'm known for anything, I hope it's simply just for the way I care about people, and you know, those days where I don't wanna get out of bed, if I had something like Wondermind, even if it -- it took me a minute to get into it, it's just there. And there's something that's really comforting about that," she said.