Simone Biles, a vocal advocate for many women's issues, frequently calls out injustice and continually uses her platform to educate and inspire.

The latest cause she is dedicating herself to is championing individuality and eradicating competition in a realm where the perfect score doesn't exist -- beauty.

In a recent interview with "Good Morning America," Biles, who is the world's most decorated female gymnast in history, spoke about how social media hate has affected her throughout her prestigious career -- and what she wishes people would consider before commenting on her appearance.

"In the beginning, I would go look through comments, and I would cry, or maybe I would comment back to some," she said. "But now I feel like if they even comment, it's for attention, so I don't even want to give them the time of day."

Biles said if she could go back in time, she would tell her younger self to stop putting so much attention on the trolls.

However, she admitted that sometimes hateful remarks on social media can affect her.

"I feel like any negativity that comes your way is a little bit effective, even if it's people that you don't know. It's from people that you think should care, so it is hurtful at times." To stay grounded, she said she always tries to remember, "At the end of the day, they don't know who I really am, rather than looks and what I've achieved."

Exposure to these critics from such a young age has helped Biles to develop a "strong bone," she said. The gymnast also credits positive female figures and influences in her life for helping her find her confidence.

"I feel like for growing a strong bone and not caring about what people think, definitely Chrissy Teigen," Biles said on who inspires her. "But who has helped shape me into thinking I'm beautiful with or without makeup was definitely Aly Raisman. She played a huge role in that."

"She never wore a lot of makeup and always felt beautiful," Biles said about Raisman, her Olympic teammate. "And she always told all of us that we are beautiful, doesn't matter what you look like, but your soul is beautiful. And then that leads to the outside and you start glowing. And that really resonated with me." 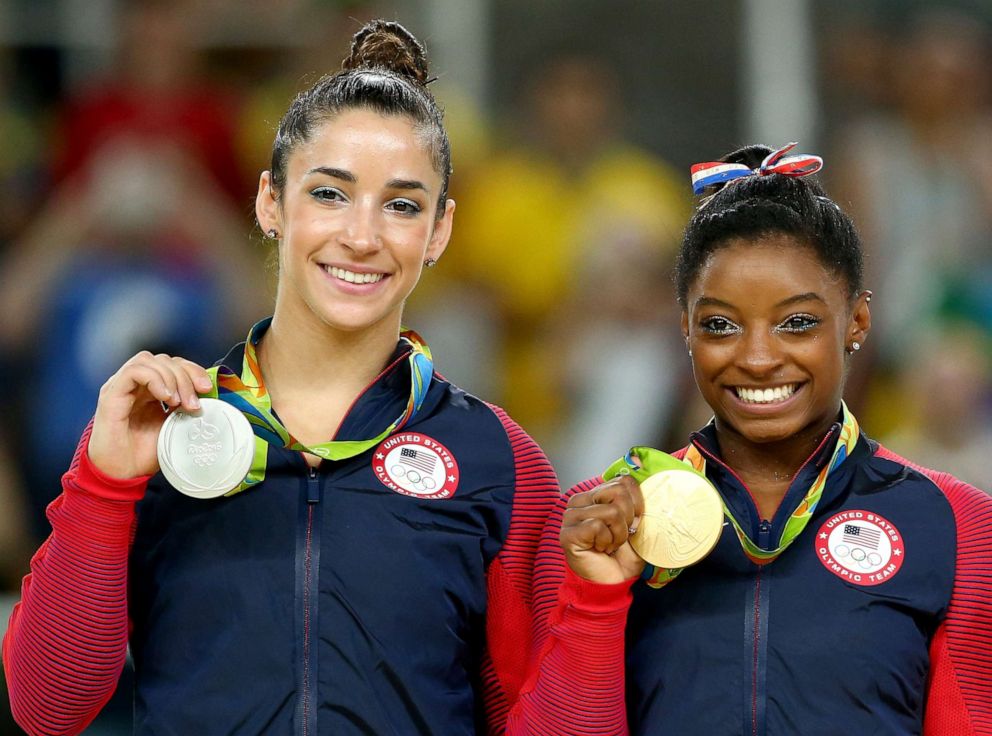 Alex Livesey/Getty Images, FILE
Silver medalist Alexandra Raisman, left, and gold medalist Simone Biles of the U.S. pose for photographs on the podium at the medal ceremony for the Women's Floor on Day 11 of the Rio 2016 Olympic Games at the Rio Olympic Arena on Aug. 16, 2016 in Rio de Janeiro.

Biles said she and her teammates could at times, "find comedy in some of the comments."

"We'll see like, 'Oh, your calves are too big.' And then we're just like, 'What? But I wouldn't be able to tumble, like that's the beauty of it,'" she said. "Or some people make comments and then you look at their profile and you're like, 'Wait, I don't get why you're commenting to me.' Some of it is a little bit crazy and off the wall, but I mean, it's whatever makes them feel better. At the end of the day, we kind of just brush it off, because, you know, we were built like this for a reason. And that's what we do."

Looking ahead to the 2020 Summer Olympics in Tokyo, Biles realizes that she and her teammates will be in the public eye more and studied to an even greater extent. She's hopeful that viewers will remember, "We're people -- we're human, we have feelings too."

"We do see some of the comments you guys write, so just be a little bit more mindful," she added. "But we'll also do our part and we'll try to be mindful -- not comment back, not let it affect us and just go out there and do what we're supposed to do."

Biles recently partnered with skin care brand SK-II to highlight her mission to challenge beauty standards. In one of the campaign videos, an animated version of Biles fights against a "beauty troll," which is made up of negative tweets that have actually been written about the gymnast.

At the time of announcing the partnership, Biles also penned an emotional letter about how much competition has influenced her life and shaped her perspective.

"Let's talk about competition," she wrote. "Specifically, the competition I didn't sign up for and feel like has become almost a daily challenge for me. And I do not think I'm the only one."

The 22-year-old explained the downside of the attention she's experienced outside of her profession. "I'm talking about beauty," she said. "I don't know why but others feel as though they can define your own beauty based on their standards."

She shared how much these standards have taken a toll on her mental state throughout her life.

"I've learned to put on a strong front and let most of it slide. But I'd be lying if I told you that what people say about my arms, my legs, my body ... of how I look like in a dress, leotard, bathing suit or even in casual pants hasn't gotten me down at times."

Biles believes it's important to use her tremendous platform to speak about the toxic culture that often exists when examining beauty standards and expectations. She said what's most important is that women remember, "It doesn't matter what you look like on the outside -- it's about how well you do."

"So if you're doing your job -- you're bringing back medals, you're having fun -- then you've done your job," she added. "Your appearance doesn't matter."