Elijah McClain was 23 years old when he died last August after being detained by Aurora, Colorado, police and given a shot of ketamine, a powerful anesthetic, by paramedics.

Since George Floyd's death in May, McClain's case has received renewed attention. Stars, including Janelle Monae, Beanie Feldstein and Jonathan Van Ness, are lending their voices to a campaign, calling on officials to act.

The video, released on Saturday and running through Aug. 23, honors the 23 years McClain lived.

"Elijah was a violinist who played for kittens across the street, just to keep them company -- a creative soul, planning to go to art school," Monae said. "Trust us when we say we won't settle for anything less than justice for Elijah McClain." 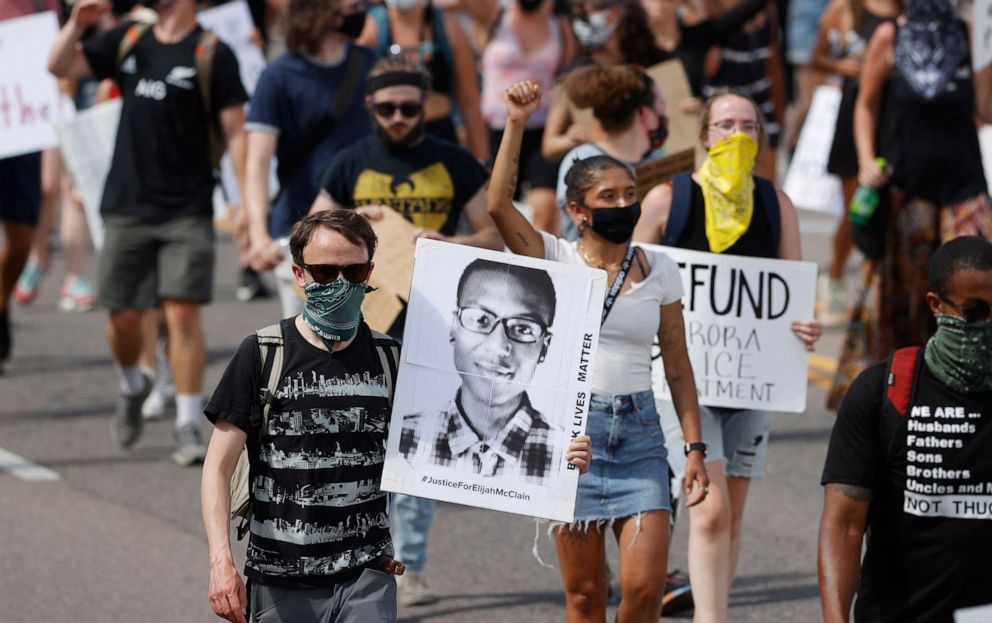 David Zalubowski/AP
Demonstrators carry placards as they walk down Sable Boulevard during a rally and march over the death of 23-year-old Elijah McClain, June 27, 2020, in Aurora, Colo.

A spokesperson for Colorado Gov. Jared Polis, who appointed a special prosecutor to investigate McClain's case in June, told ABC News in a statement that the governor "agrees that Elijah McClain deserves justice."

"Now more than ever, we must do everything within our power to foster public trust and confidence in law enforcement and the criminal justice system," his spokesperson said. "That’s why the governor signed sweeping bipartisan police reform legislation into law that has now established significant new accountability for officer-involved killings. Elijah McClain should be alive today, and we owe it to his family to do everything we can to ensure justice is served.”

Added Aurora Mayor Mike Coffman, "Elijah McClain’s death is a tragedy and my heart goes out to his family. To all of those who have reached out, please know that we hear you, and Elijah’s death is a catalyst of change in our city."

Coffman went on, "We have reformed critical police policies including banning the use of carotid control holds, created a Community-Police Task Force—comprised of faith and community leaders, police and justice reform advocates—and commissioned an independent investigation led by a nationally-recognized attorney for civil rights and urban affairs. We must have the answers our community demands, city leadership needs, and most importantly, Elijah’s family deserves."

Colorado Attorney General Phil Weiser's office stated that it "does not comment on pending investigations," and a representative for Aurora City Attorney Daniel Brotzman did not respond to ABC News' request for comment.

Colorado health officials have opened an investigation into the use of ketamine following "numerous" complaints regarding "a ketamine administration in August 2019," according to the Colorado Department of Public Health and Environment, which didn't offer specifics about the investigation other than to say it's ongoing.

City Attorney Daniel Brotzman and Attorney General Phil Weiser, who are called upon in the video to take action, did not reply to ABC News' request for comment.

McClain was walking home from buying iced tea at a corner store on Aug. 24, 2019, when he was stopped by police, McClain's family attorney, Mari Newman, told ABC News. Police had received a call that McClain looked "sketchy" for wearing a ski mask, though the caller stated that nobody appeared to be in danger, according to a transcript of the call.

When police approached McClain, he continued to walk despite being told to stop. A struggle followed, and officers put McClain in a carotid control hold, restricting the flow of blood to the brain from the carotid arteries, police said.

Paramedics with the Aurora Fire Department also administered a shot of ketamine, which was protocol for "rapid tranquilization in order to minimize time struggling," according to officials. He later suffered a heart attack in an ambulance.

The Adams County coroner said in McClain's autopsy report there was a "therapeutic level" of ketamine in his system, though Newman called the dose "excessive."

"He weighed 140 pounds and the dosage he got was for somebody who was at least twice that weight," Newman said.

District attorney Dave Young, who serves Adams and Broomfield Counties, has not pressed charges against the officers involved in McClain's arrest. In a June interview with ABC News, he said that he believes "a serious heart condition ... led to [McClain's] death."

"My initial impression was that it was the ketamine that perhaps caused Mr. McClain's death," Young said. "And it wasn't until I received the forensic autopsy report that I learned that that in fact was not the cause of death."