The U.S. Women's National Team are back home after their historic World Cup win and the celebrations have just begun.

Megan Rapinoe, Alex Morgan, Julie Ertz, Rose Lavelle, Alyssa Naeher, Carli Lloyd, Jessica McDonald, Crystal Dunn and the rest of the USWNT joined "GMA" along with their coach Jill Ellis for a welcome home party and shared in the ongoing excitement on the heels of their record-breaking run. 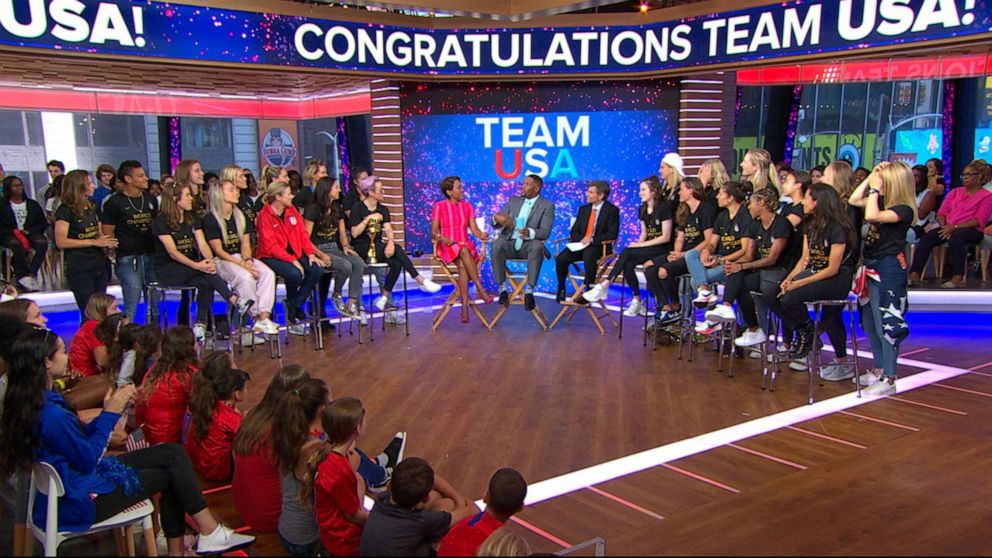 When asked how she felt about being part of a dynasty, Rapinoe said, "I think it suits us. This team fits well into that word."

The now four-time FIFA Women's World Cup champions defeated the Netherlands 2-0 Sunday to earn their second consecutive title and notched some impressive records throughout the 2019 tournament in France.

For Lavelle, the win was the manifestation of something she worked towards her whole life.

"It's kind of something you've always envisioned yourself doing, so I never like to call it a dream, because it was something I really felt would be a reality someday," she said.

The @USWNT joins Germany (2003 and 2007) as the only teams to repeat as World Cup champions, scoring a World Cup record 26 goals.

The U.S. broke its own record for the most FIFA Women's World Cup wins of any country with four and joins Germany as the only other country with back-to-back titles.

The @USWNT has now broken the record for most goals in a single FIFA Women's World Cup (currently at 26).

Co-captain Morgan tied a record, which had stood from Michelle Akers when the tournament began in 1991, for the most goals scored in a single women's soccer game with five in the win over Thailand.

The team received their medals from living legends who have said this team is leading a global movement.

"It was pretty incredible getting the medals from Kristine Lilly and to give her a good hug and to also see a bunch of the '99ers so in that way it's kind of come full circle," Morgan said on "GMA."

"This program has such a rich history of success; as long as we can just continue to carry it on and carry the torch, I think we're doing a pretty good job," she added.

"It's been the greatest team I've ever been involved with," Ellis said of the group of talented players. "I think it's actually the bond they had with each other that gave us such a force when we stepped on the field. I mean they're incredible individuals but they are a force."

"For all the fans and everybody, good morning, good morning America. Everybody go watch your team. Watch the national team. Watch your local club teams," she urged. "There is a part in this for everybody to do. And I think we've really left the old conversation behind us and now it's time for action."

Later, Rapinoe noted that each of the players is on a National Women's Soccer League team that they are returning to in the coming weeks -- though for now they'll take "for sure this week, maybe into next week and the next" to rest, she laughed.

"We’ll try to enjoy obviously this moment and everything that comes with it for these next few days and then back to work a little bit," Rapinoe said.

Naeher, the team's goalkeeper, addressed the incredible penalty kick save in the semifinal against England that propelled them to the final.

"There wasn't really much going through my mind. I kind of blacked out for a second," she said. "I just felt calm, everyone seemed calm, everyone felt calm. I feed off this team's energy and [my] incredible teammates. There was never a doubt in my mind that it was not going to go in and that's what I felt and was able to come up with it," she said as her teammates cheered.

(MORE: US women's soccer jersey is No. 1 Nike seller as team gears up for World Cup finals)

Sunday's exciting final was the most-watched soccer match on English-language television since the 2015 Women's World Cup final, according to Fox Sports who broadcasted the tournament.

"I'm so proud of this whole group. It's crazy," Lloyd, who has competed in four World Cups and three Olympics with the team, said, adding that she's taking time to "unwind" before making any decisions about her future. "It just gets crazier and crazier -- to the young ones it goes by very fast, so soak every bit of it up."

JUST RELEASED: The @USWNT will play at the #RoseBowl on August 3rd and tickets are on sale now! pic.twitter.com/zKzzIEfS0O

The U.S. Women's National Team also announced their upcoming scheudle and the first game for the World Cup champs will be at the Rose Bowl in Los Angeles on Aug. 3.