The 94th Academy Awards will have a triple dose of comedy from its three hosts.

"Good Morning America" revealed Tuesday that the 2022 Oscars will be hosted by Regina Hall, Amy Schumer and Wanda Sykes.

"We want people to get ready to have a good time. It's been a while," Hall, Schumer and Sykes said via a press release.

JUST ANNOUNCED: Wanda Sykes, Amy Schumer and Regina Hall will be the leading ladies to host this year's #Oscars!#OscarsOnGMA pic.twitter.com/bAOf0pnXCP 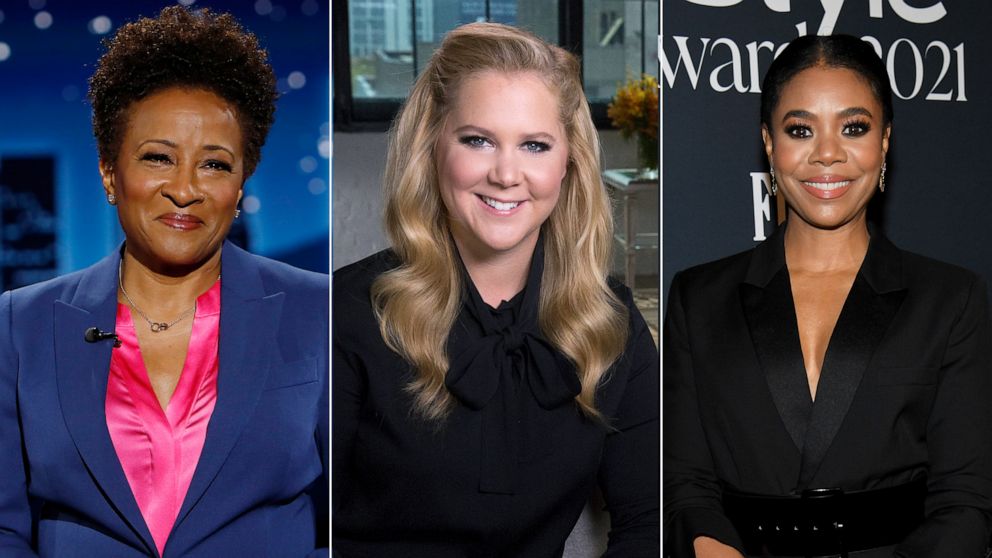 "This year's show is all about uniting movie lovers," said Will Packer, who is producing the telecast. "It's apropos that we've lined up three of the most dynamic, hilarious women with very different comedic styles. I know the fun Regina, Amy and Wanda will be having will translate to our audience as well. Expect the unexpected!"

The last time there were at least three hosts was 35 years ago at the 1987 Academy Awards when Chevy Chase, Goldie Hawn and Paul Hogan emceed.

The only time there have been multiple women hosting was 45 years ago at the 1977 Academy Awards when Ellen Burstyn and Jane Fonda hosted alongside Warren Beatty and Richard Pryor.

Never before have three women hosted the Oscars.

Hall is known for appearing in the "Scary Movie" franchise as well as films like "The Best Man," "Girls Trip," "Support the Girls" and "Little" as well as shows like "Ally McBeal," "Black Monday" and "Nine Perfect Strangers."

Schumer is a stand-up comedian known for the comedy series "Inside Amy Schumer," which won her an Emmy Award in 2015, as well as for starring in movies like "Trainwreck," "Snatched," "I Feel Pretty" and "The Humans." She can next be seen in the Hulu show "Life & Beth."

Sykes is a stand-up comedian known for starring on shows like "The New Adventures of Old Christine," "Black-ish," "The Upshaws" and "Q-Force." She hosted an eponymous talk show from 2009 to 2010 and won an Emmy Award in 1999 for her writing on "The Chris Rock Show."

MORE: Oscar nominations 2022: Peter Travers on the snubs and surprises

This year's Oscars telecast will be directed by Glenn Weiss. "The Power of the Dog" leads this year's nominees with 12 nominations. "Dune" is close behind with 10.