To his countless fans, Kobe Bryant was a larger-than-life basketball star with an Academy Award and burgeoning career in the entertainment industry.

But to his friends and family, the late L.A. Laker was also a doting father to four daughters, a romantic husband to his longtime love, Vanessa, and a devoted friend.

Days before what would have been Bryant's 42nd birthday, WNBA stars Diana Taurasi and Sabrina Ionescu remembered Bryant -- nicknamed "Black Mamba" for his drive and laser focus -- as someone who pushed himself and everyone around him to be better.

"There was just this constant fire that was burning," Taurasi told "Good Morning America." "I think he was trying to give people that hope that if you have a passion and you have this burning desire to be really good at [something], whatever it is, you can get there. That's what he gave me." 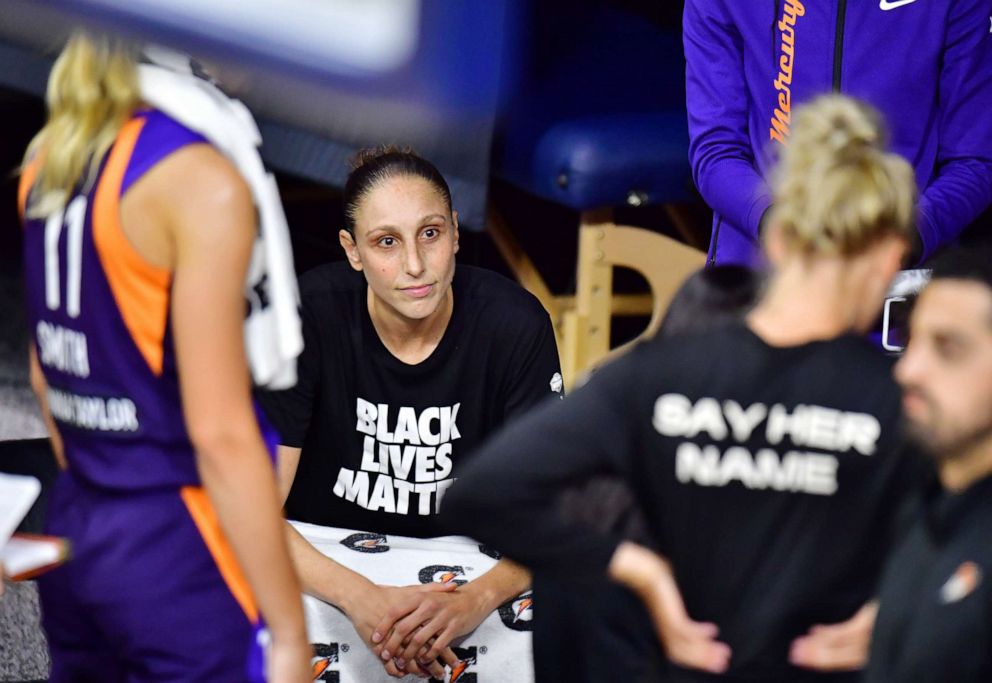 Julio Aguilar/Getty Images
Diana Taurasi of the Phoenix Mercury looks on during a timeout in the first half of a game against the Los Angeles Sparks at Feld Entertainment Center on Aug. 19, 2020, in Palmetto, Fla.

"He saw greatness in you even if you didn't see it yourself," added Ionescu. "Kobe was special."

Bryant was killed alongside his 13-year-old daughter, Gigi, and seven others when the helicopter in which they were traveling crashed on Jan. 26. At the time, the group was en route to Bryant's Mamba Sports Academy, now called Sports Academy, for a game. Gigi Bryant dreamed of playing professional basketball like her father, and he was teaching her everything he knew, Taurasi recalled. Women's sports in general were something he always championed, she said.

"He was doing it before it really became popular to do it. I mean, he was doing in 2008 at the Beijing Olympics. He was at every single one of our games," Taurasi recalled. "When he was coaching [Gigi's team] ... he was tuned in like it was just as important as coaching an NBA Finals."

"He's actually putting in effort and energy and time which, when you think about a guy like Kobe, you don't have a lot of that," she continued. "I think he looked at it as a challenge that, hopefully, Gigi can make it to that level one day."

In honor of Bryant's birthday on Aug. 23, and Kobe Bryant Day on Aug. 24 (Bryant's numbers were 8 and 24), Taurasi, whom Bryant affectionately called "White Mamba," spoke to "GMA" about her friend and his legacy.

"He was a guy that had so much to give," she said. "There was so much more he was going to do. He was going to open so many doors for so many people, different avenues to give people opportunity, and that's all you can ask for."

Ionescu compiled her thoughts in a personal essay for "Good Morning America," below. 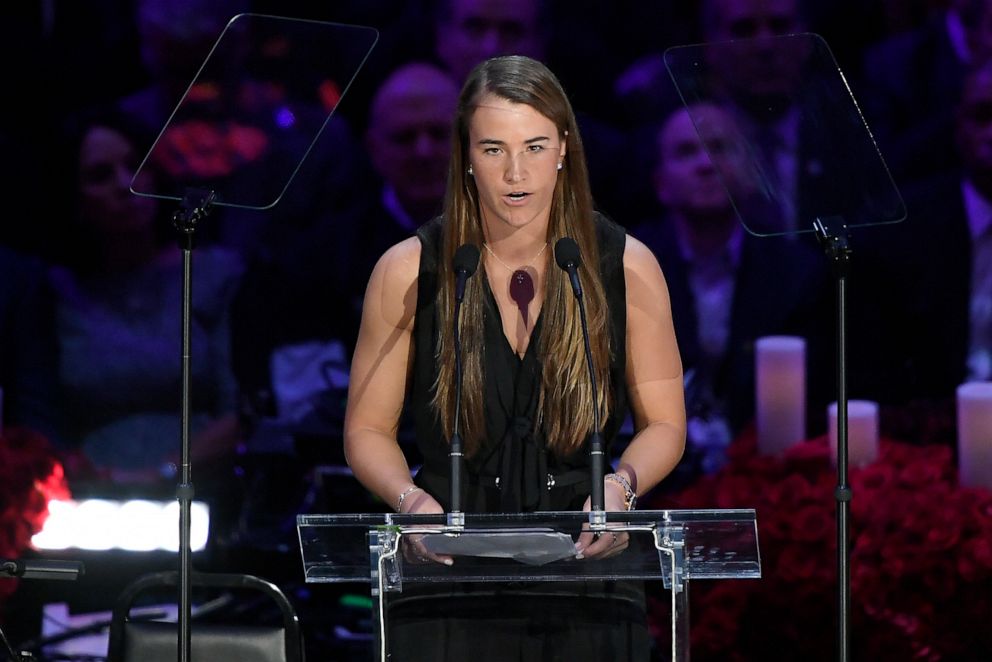 The impact Kobe had on basketball is far greater than anyone had thought to be possible. Kobe not only motivated and inspired people to be the best they could be, he showed them how to be the best. Through his work ethic, his desire to be the best in anything and everything and his "Mamba mentality," he was the best role model those can be. He saw greatness in you even if you didn't see it yourself, and if you were so lucky to be one of the individuals that he mentored and invested his time in, you know exactly how magical his mentorship was: something that is indescribable, and purely unlike any other. That was Kobe: magical.

He meant everything to women's basketball, the way he invested his time and energy in the game was unlike any other. It's because he knew Gigi would be the future one day and he knew he had to do his part and advocate for equality. He wanted to be the very best he could: the best husband, father, player and coach. If people, especially "girl dads," want to live out his legacy, they'd better support women's sports. 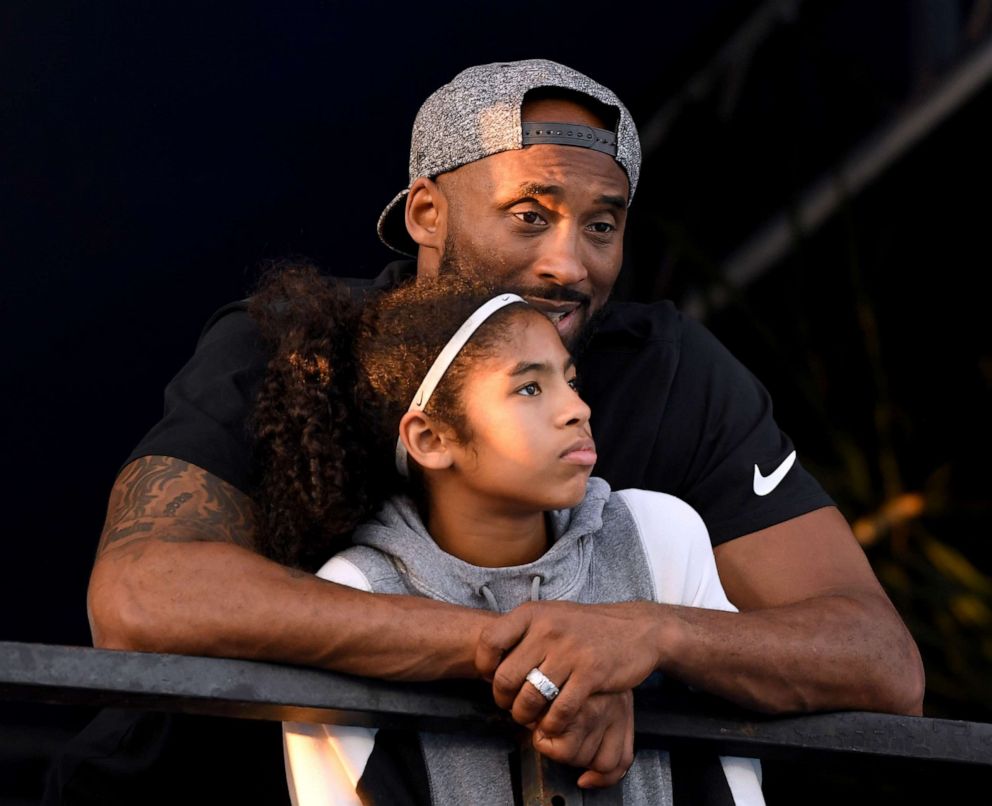 No matter what it was, Kobe was going to win. The way he's impacted the world, and is now able to have more and more people supporting the W, is a testament to the impact that he still has today.

Kobe was special, and magical to say the least. His impact in this world will forever be felt, because his legacy still lives on through so many of us.

Kobe and Gigi are looking down on us smiling.

Miss you guys more than anything.

I miss you guys more than I could ever put into words 💔 Kobe, thank you for being a source of light in the midst of darkness.You were and always will be my sanctuary. You brought me the peace and guidance that I had been searching, and praying so long for. You were my mentor, idol, inspiration, and close friend. A part of me was lost Sunday, a void that can never be filled, because you are one of one. You took me under your wing and believed in me more than I believed in myself. I only have one choice. To live out your legacy. 🐍 You will forever live through me, and be watching over me every step of the way, because you have the best seat in the house. I can still hear you telling me, “Sab, real sharpness comes without effort,” and that’s a voice I will never forget. Love you boss. Always. Gigi, Alyssa and Pay Pay- Never stop shining your light! I was blessed to have been apart of your lives and to inspire you, but now you inspire me. Keep working on those fade away jumpers up in heaven. RIP little mambas❤️🐍 I pray for everyone who lost a loved one on Sunday, may God heal your broken hearts🙏🏼 Legends never die! #mambamentality🐍